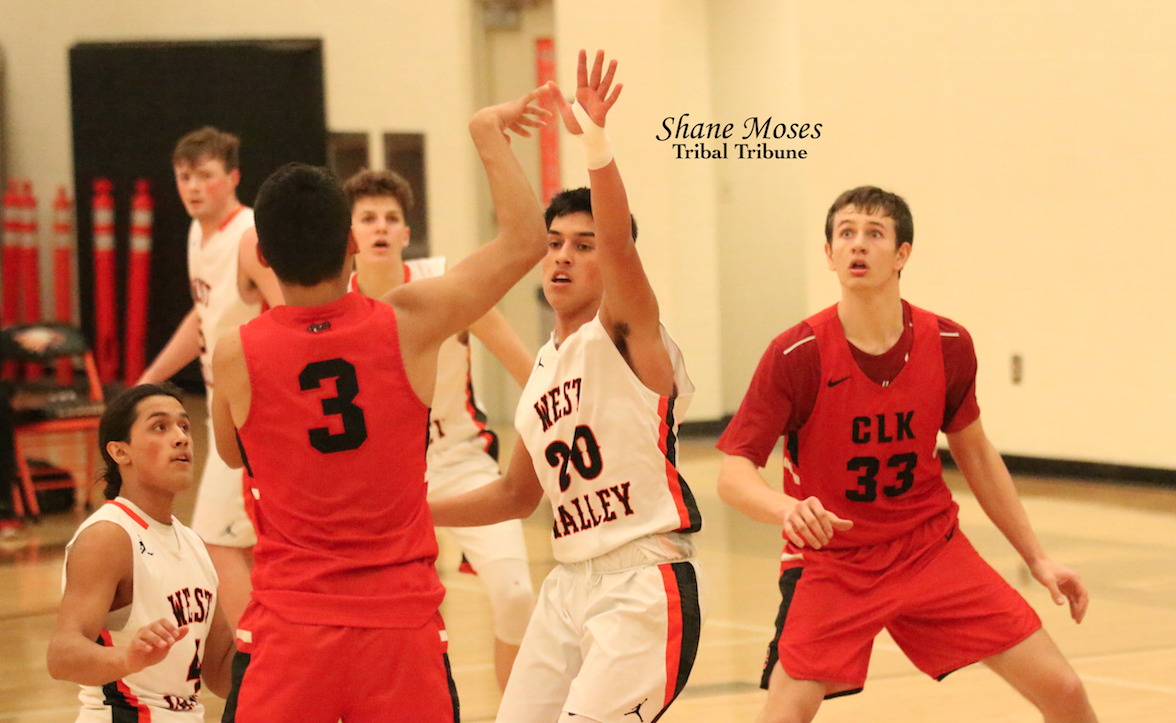 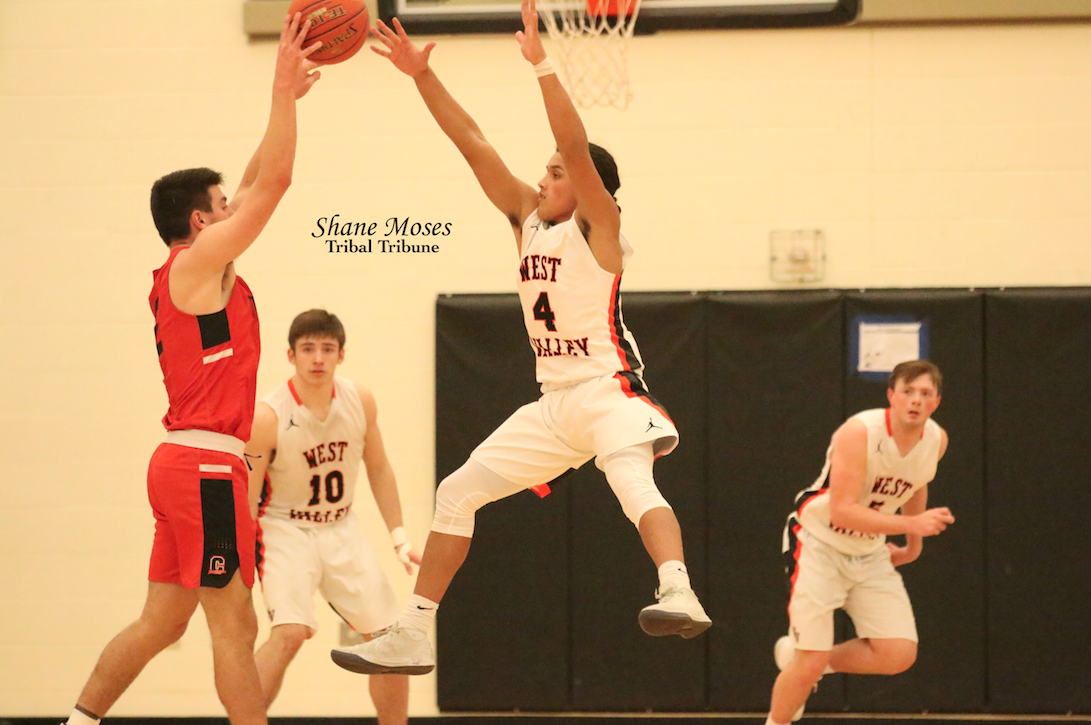 West Valley’s Dakari Pakootas (#4 white) jumps up in the air to try and deflect a pass against Clarkston on Wednesday (Jan. 29) evening. 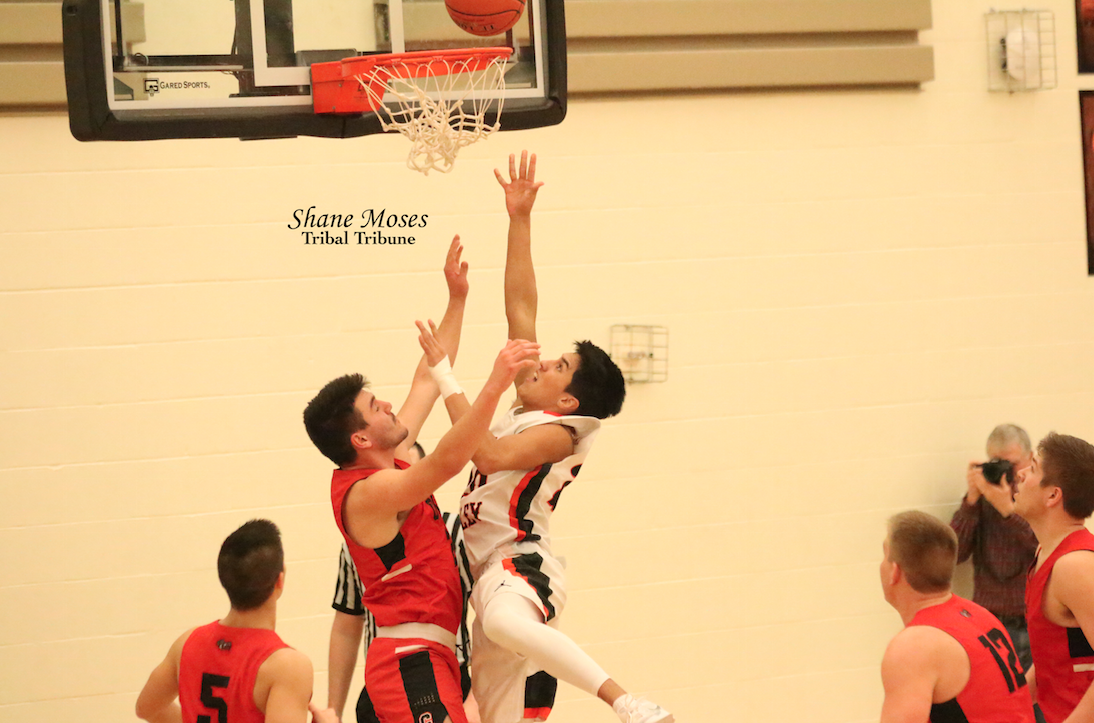 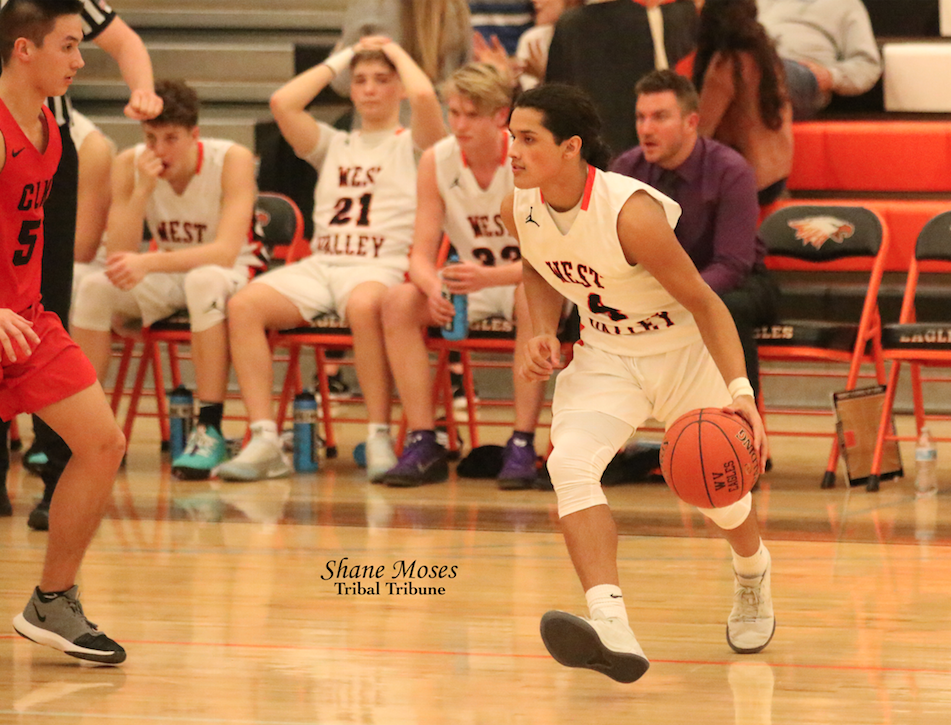 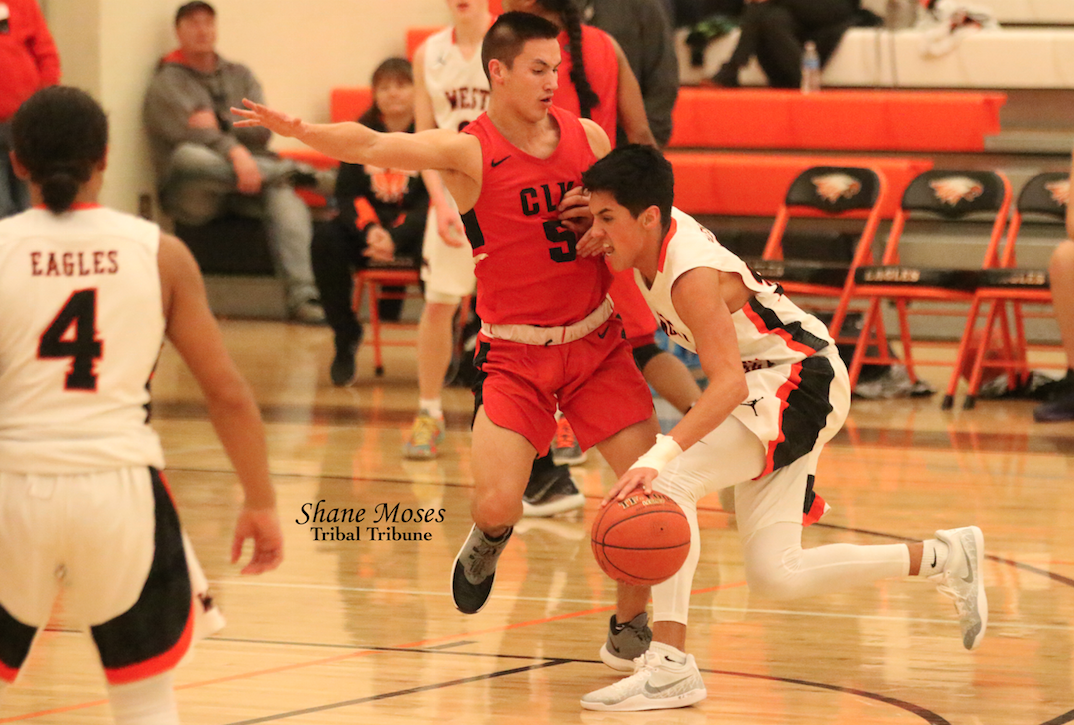 West Valley’s Dakari Pakootas (#4 white) jumps up in the air to try and deflect a pass against Clarkston on Wednesday (Jan. 29) evening.

SPOKANE – Getting to play with your friends on the basketball court can be a great experience, but how about sharing that with your brother?

For Jayce and Dakari Pakootas of West Valley high school, that experience is a reality.

The two brothers, both Colville tribal members, have seen lots of playing time on the varsity basketball team this season for the Eagles.

The two transferred in from Spokane Valley’s Central Valley High School, a 4A school, and have flourished with the Eagles.

West Valley, which competes in the Great Northern League at the 2A level, is mostly comprised of underclassmen, with four seniors, six juniors and one sophomore.

The Pakootas brothers are both in their junior year.

Jayce stands 6-foot-2, with short hair. Dakari checks in at 5-foot-10 with long hair. Both also have their own personality out on the court.

“I love it. It’s great to have my brother on the team,” says Jayce.

The Eagles are 5-5 on the year in GNL action as their final two league games are against the top two teams (Clarkston and Pullman). West Valley is currently 9-8 overall.

The Eagles have lost four games by five points or less, and although their win-loss record may not reflect their close game defeats, the Pakootas brothers continue to keep grinding away.

“For me, it’s been a pretty good season,” says Dakari. “It’s just taken us some time to get going. We could do better.”

Dakari is averaging six points per game this season, scoring 102 points this year in 17 games. His season high is 11 points.

Jayce has scored 171 points this season, averaging 10.0 points per game for the Eagles. His season high is 22 points.

SPOKANE – After starting off the year at 2-4, the West Valley high school boys basketball team has now won seven of their last 11 games, putting them in a log jam for the second place spot of the Great Northern League.

In their last game against Clarkston on Jan. 29, the Eagles fell behind 20-6 after the first quarter and trailed 34-15 at halftime.

Clarkston held a 52-31 lead with seven minutes left in the fourth quarter but the Eagles didn’t go away as they exploded for 30 points in the quarter to narrow the margin to nine points.

Dakari and Jayce Pakootas both scored six points apiece against Clarkston on Jan. 29.

“We got outworked. They just came out and pushed the ball harder than us,” said Jayce. “We were taking good shots, but they just weren’t falling.”

“We just had a bad game,” said Dakari. “Tough loss. We hustled, but we couldn’t make shots. They just out played us.”

West Valley has three games remaining, two are GNL games, as they play at Pullman (on Feb. 7) and are home against Clarkston (on Feb. 11) for their final regular season game.

The great Northern League / District 7 2A boys basketball tournament will be held from Feb. 14-20 with the first three games being held at University High School. The championship game will be held at Clarkston High School on Feb. 19 at 6 PM.