You are the owner of this article.
Edit Article Add New Article
News
Sports
Opinion
Social Media
Advertising Opportunities
1 of 8 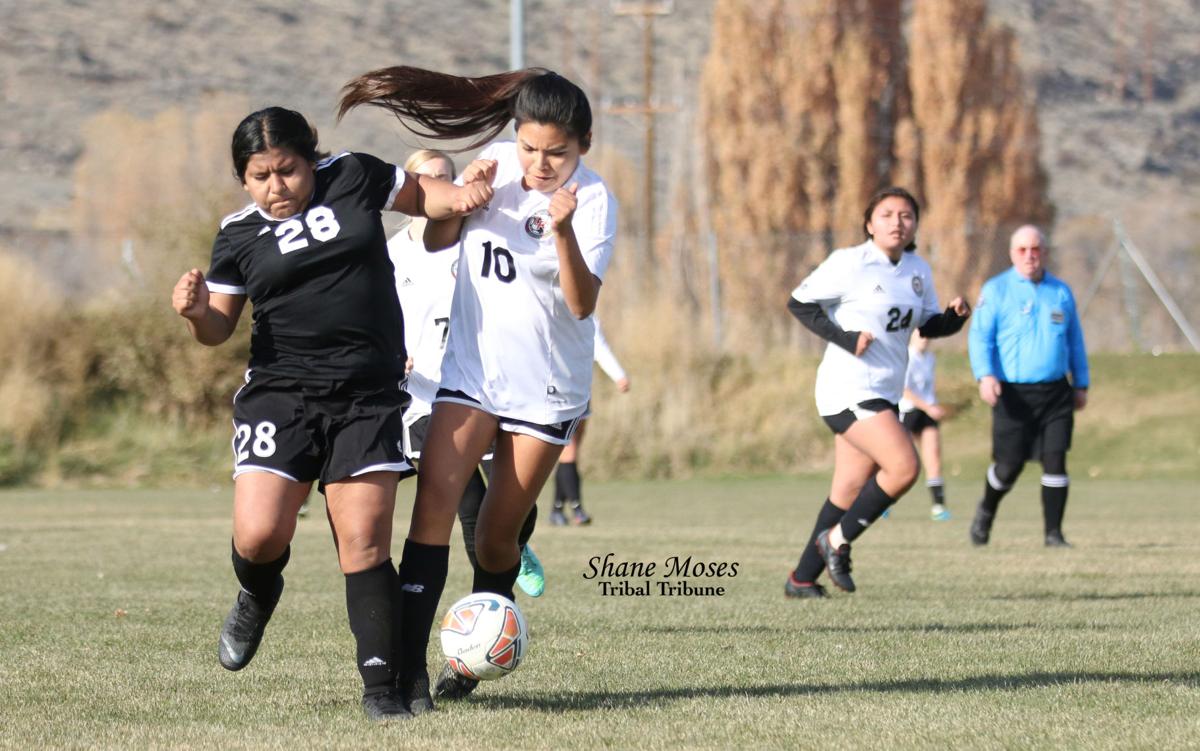 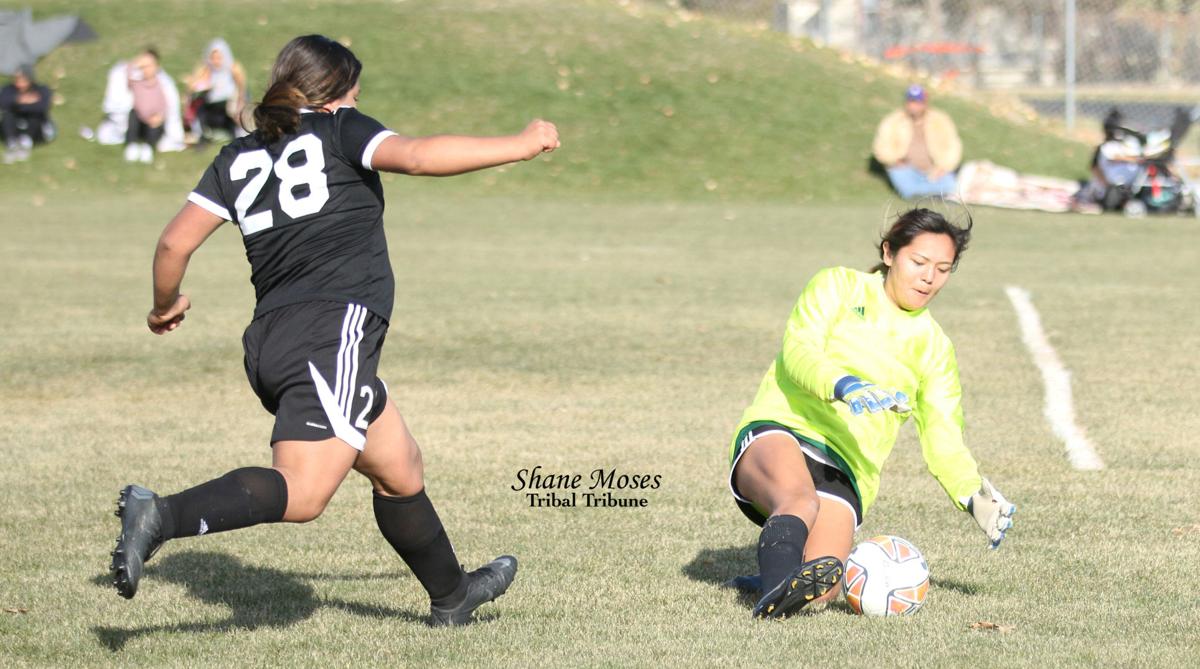 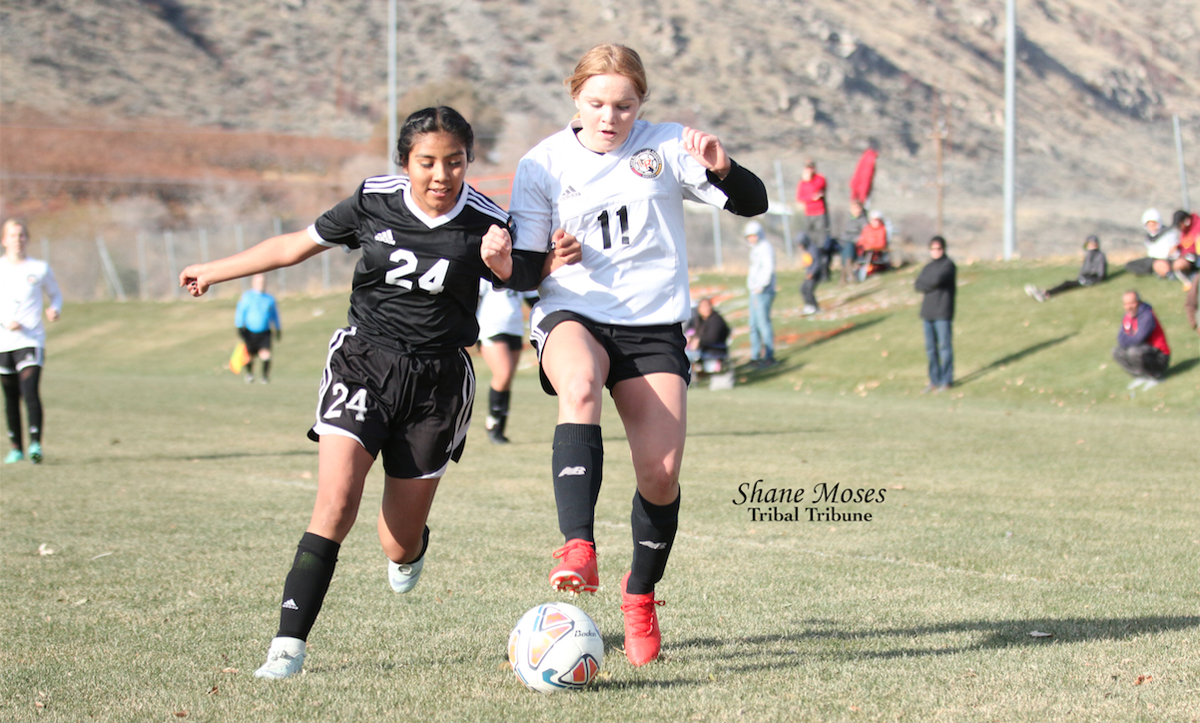 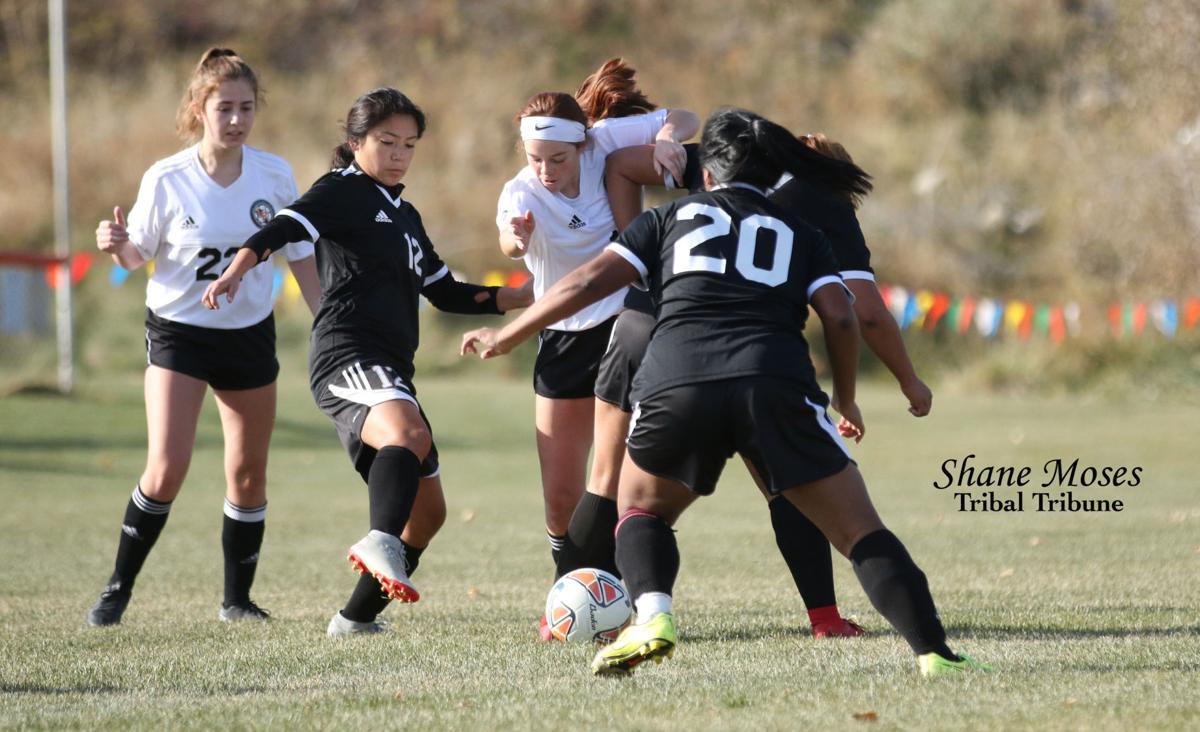 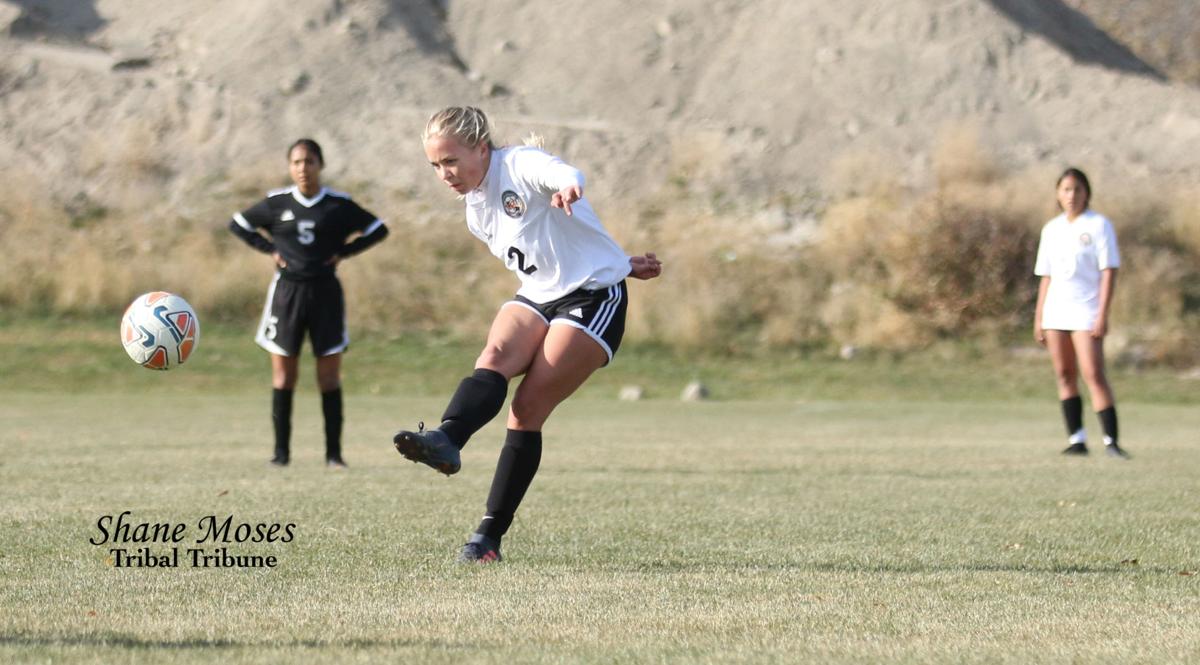 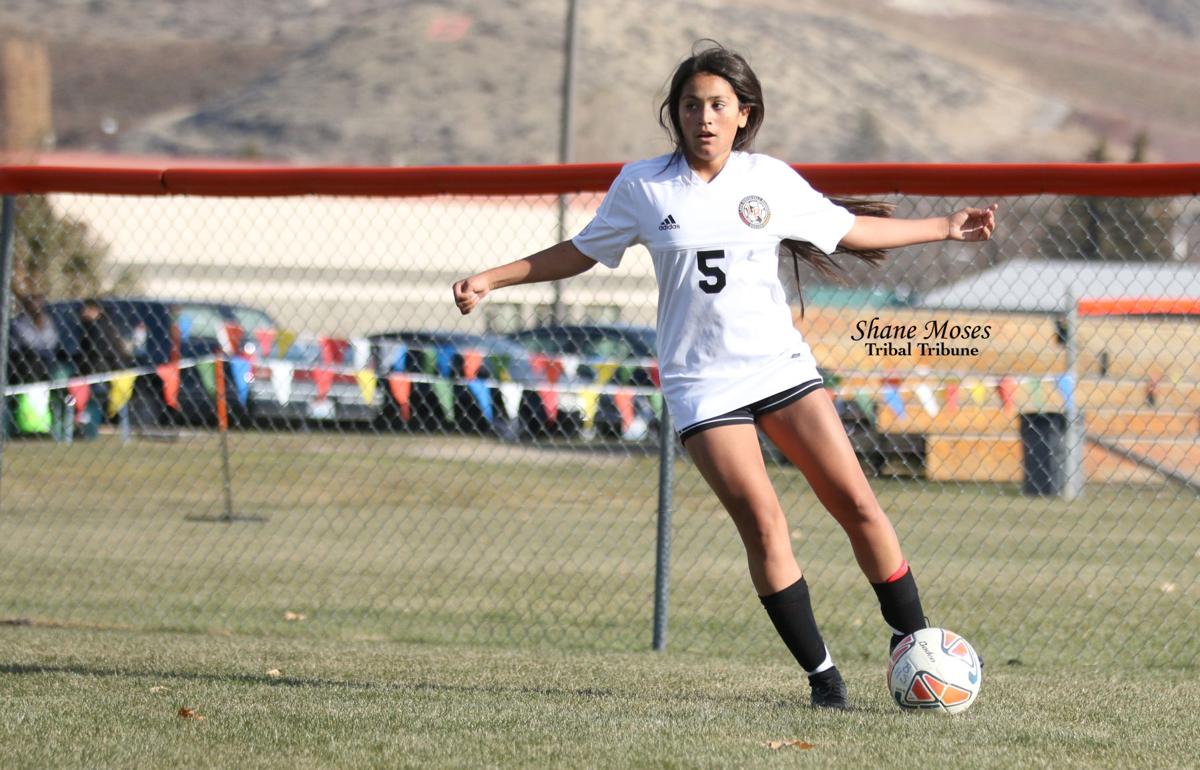 Colville tribal member Almeta Desautel ponders where to kick the ball against Bridgeport on Saturday (Nov. 2) morning in CWA 2B District Tournament 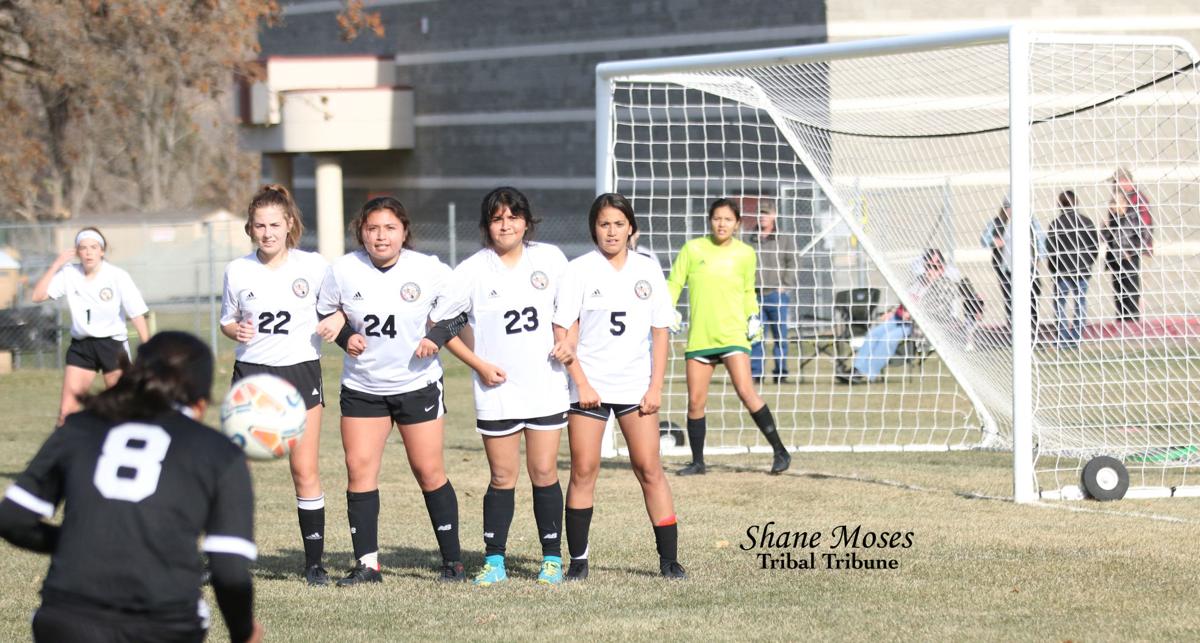 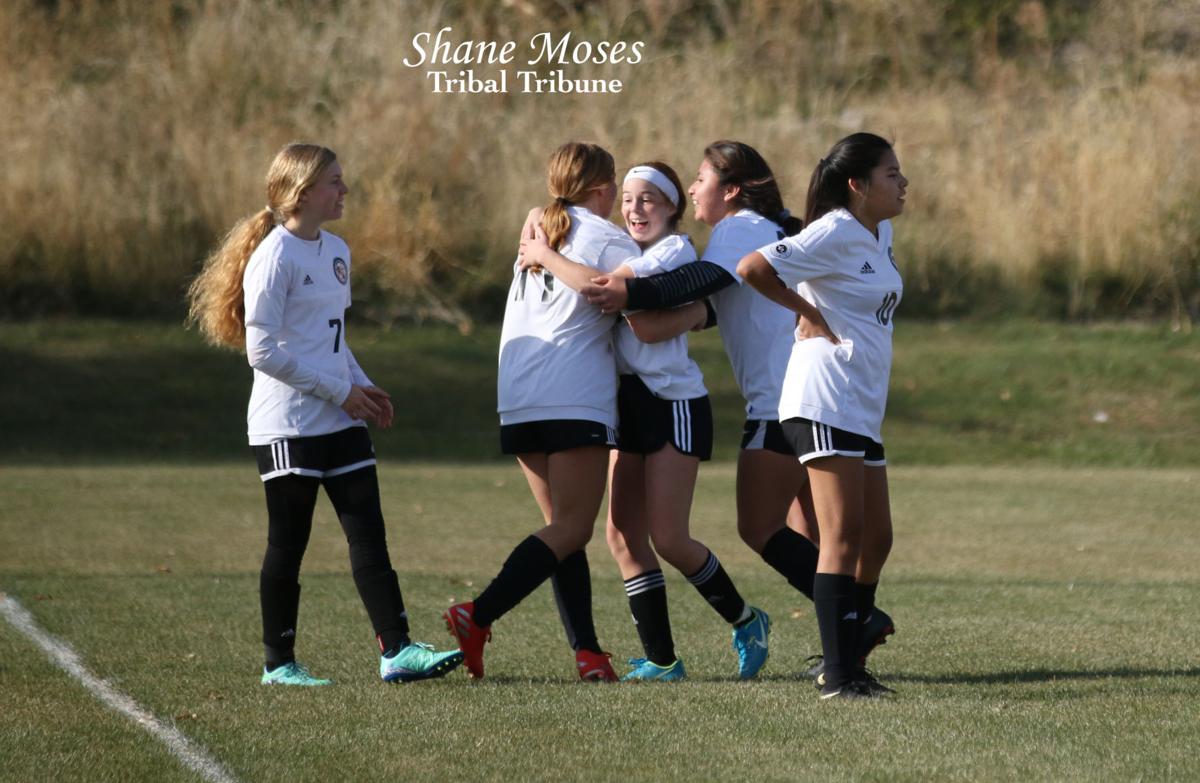 Colville tribal member Almeta Desautel ponders where to kick the ball against Bridgeport on Saturday (Nov. 2) morning in CWA 2B District Tournament

BRIDGEPORT – The situation for the Lake Roosevelt high school girl’s soccer team before their match up in Bridgeport could be summed up by saying, “Win and continue onwards. Lose and turn in your jerseys.”

With their season riding on the line, the Lady Raiders held off a late rally by Bridgeport to win 3-2, Nov. 2, in the Central Washington 2B League District playoffs.

“It was amazing,” said Jasilynn Schilling, (Colville tribal member) forward for Lake Roosevelt. “Since I’ve played, this is our first win against Bridgeport. It feels great.”

Getting a win over a team they have struggled with in recent years would propel the Lady Raiders to the semifinals of the CWA 2B League district playoffs, a first in program history.

“It feels great for us,” said first-year head coach Micah Esmonds of Lake Roosevelt. “We’re very proud of them. It feels great just to beat them.”

Lake Roosevelt’s Bryn Chaffee scored the opening goal 13 minutes into the game, giving the Lady Raiders a 1-0 lead off of a free kick from around 25 yards out.

Bridgeport’s Aracely Valdovinos booted a shot on goal, coming within inches of tying the game in the 33rd minute.

Just a minute later Lake Roosevelt countered, advancing the ball up field as Schilling poked the ball past Bridgeport’s goalie, giving the Lady Raiders a 2-0 lead at the 34th minute.

“That first goal was awesome and that second one was awesome,” said Esmonds.

Chaffee put the ball into the box, ultimately finding Schilling, who would go on to score her second goal of the game to give the Lady Raiders a 3-1 lead at the 51st minute.

Bridgeport would score late in the match as they got their second goal in the 80th minute, cutting the deficit to 3-2, but they would fall short. Bridgeport was awarded a penalty kick at the 78th minute, but they were unable to convert.

“The last 10 minutes they pressed high. It was a nail biter towards the end,” said Esmonds.

After defeating Bridgeport 3-2, Lake Roosevelt advanced to the semifinals against number one seeded Tonasket. They would end up losing that game 6-3 on Tuesday (Nov. 5) evening knocking them to the third place match.

The Lady Raiders would fall to Brewster 5-1 on Thursday (Nov. 7) in a loser out, winner advance format, ending their season.

Lake Roosevelt finished the season with six wins, nine losses and one tie.