You are the owner of this article.
Edit Article Add New Article
News
Sports
Opinion
Social Media
Advertising Opportunities
1 of 10 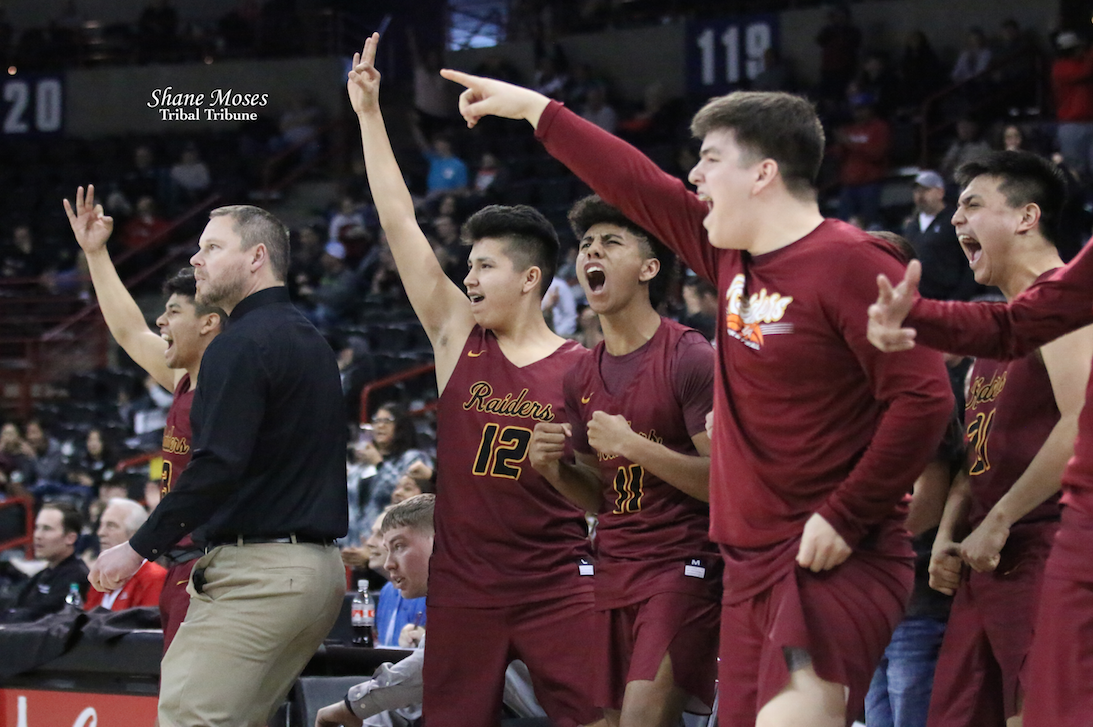 Players on the bench for Lake Roosevelt stand and cheer for their teammates against Toutle Lake in the 4th/6th place game on Saturday (March 7) morning. The Raiders held off Toutle Lake 49-46. 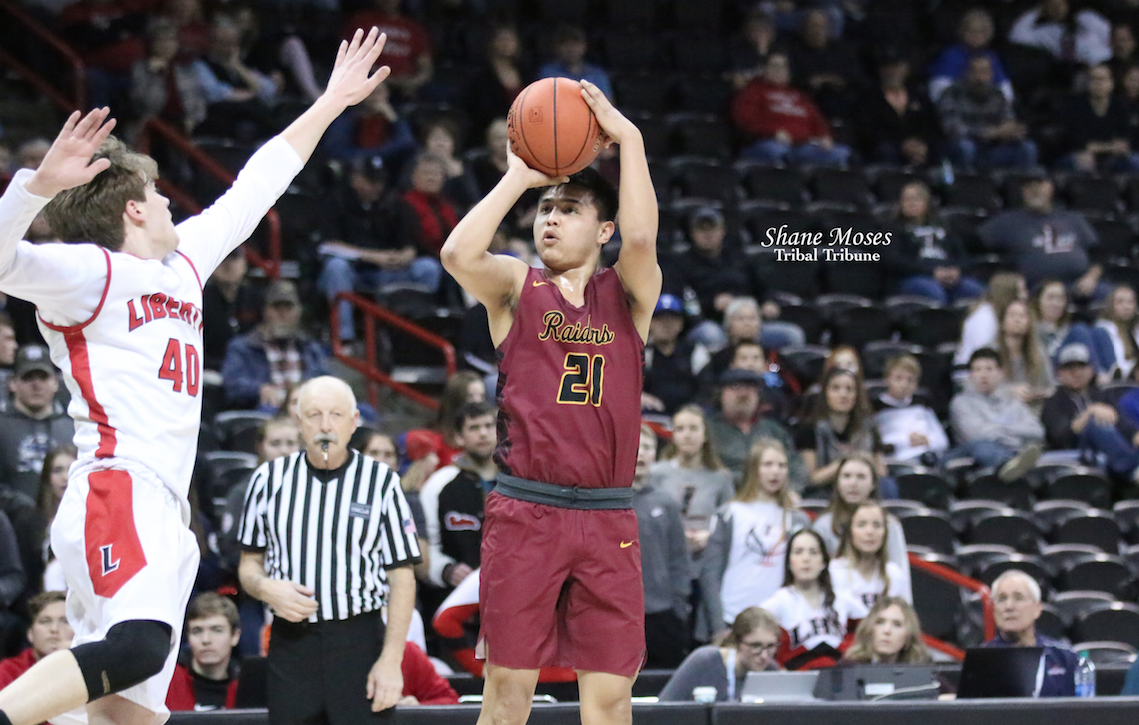 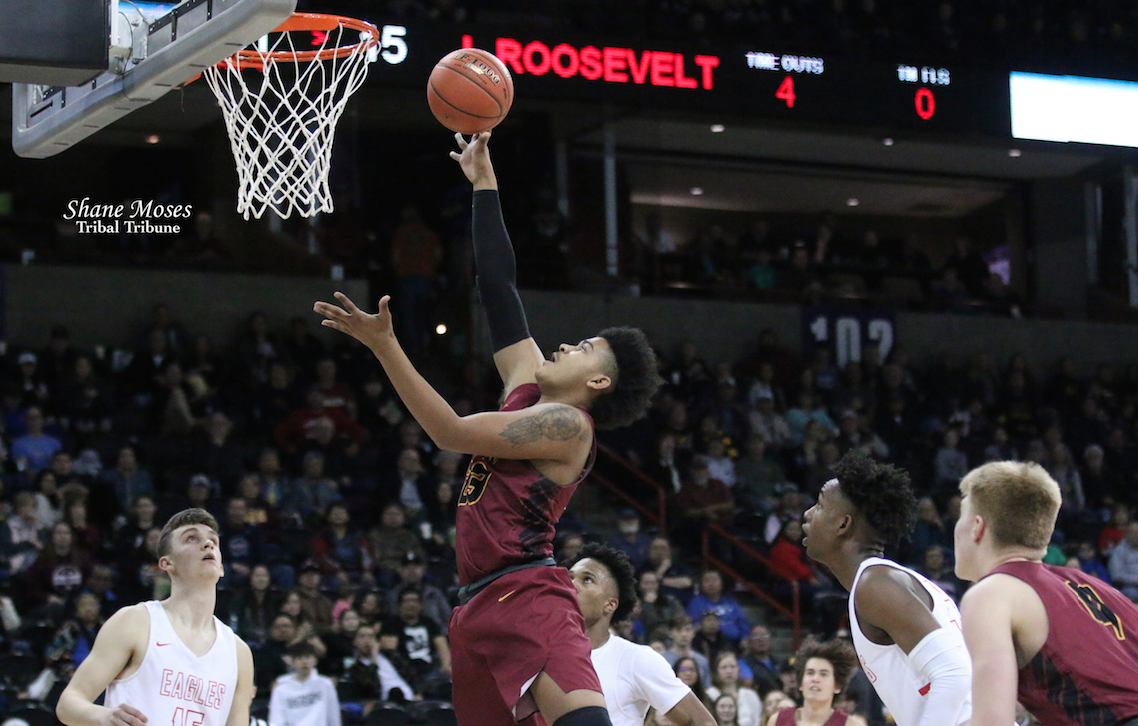 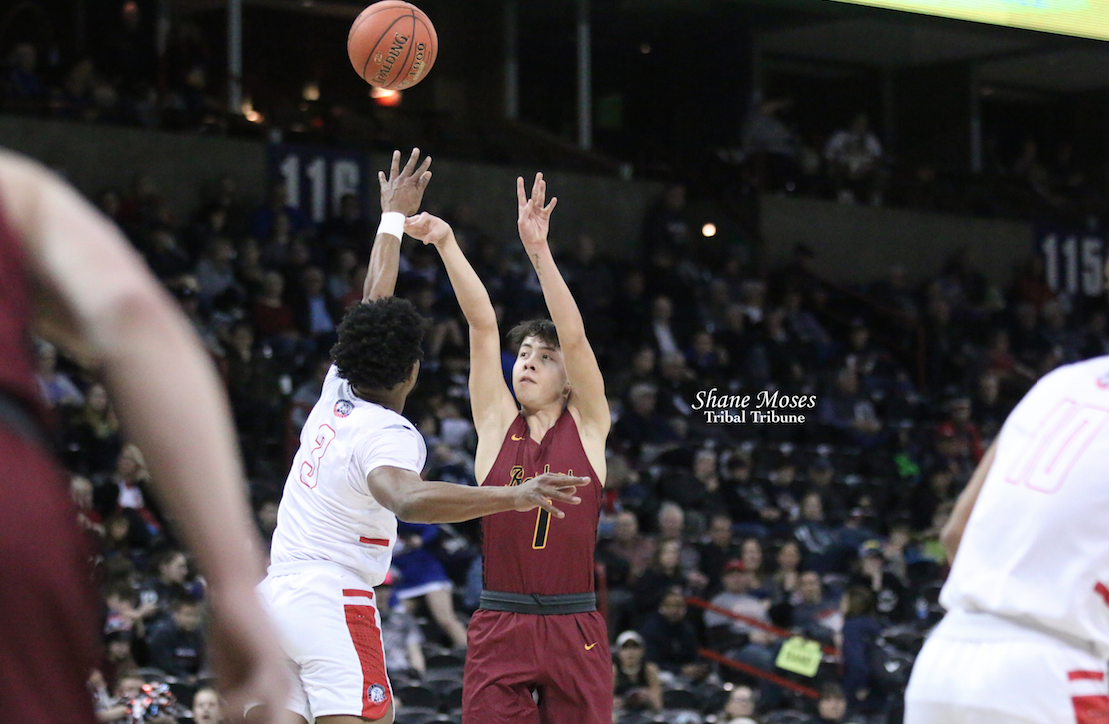 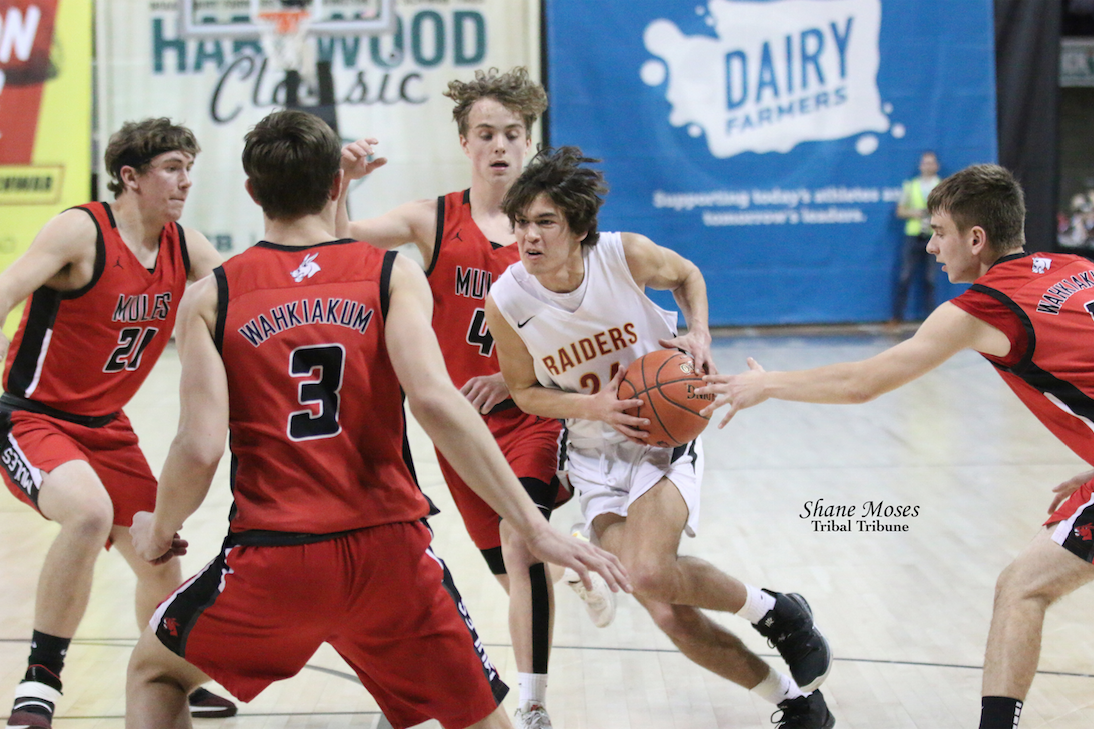 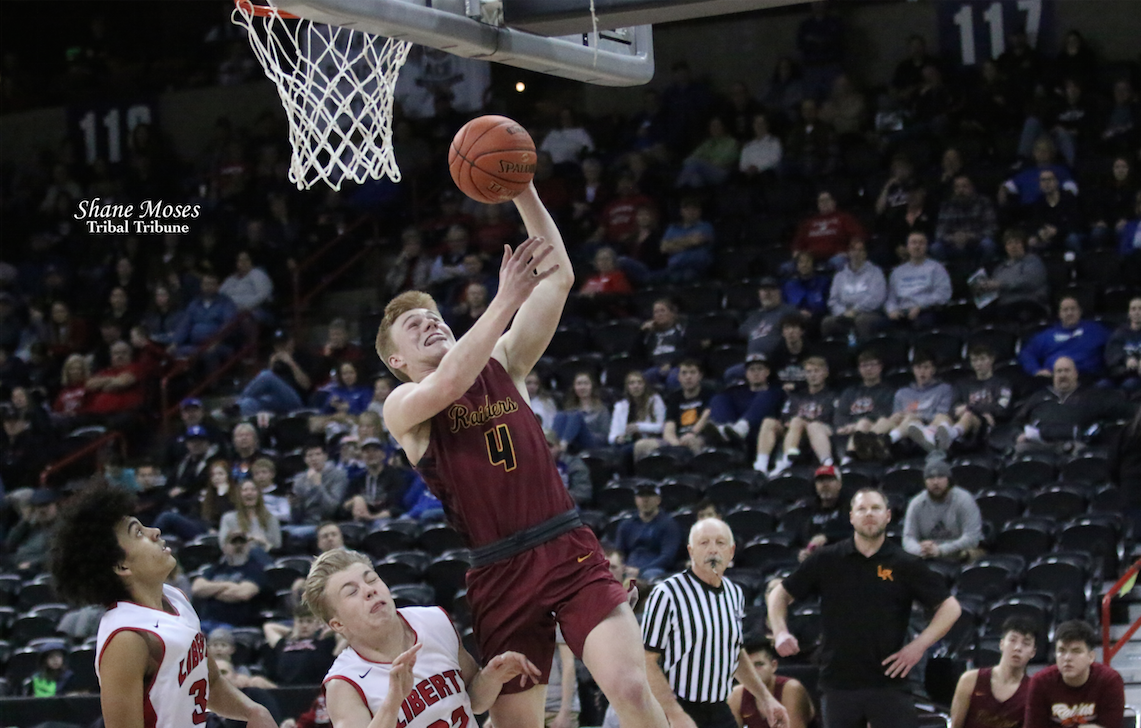 Colville tribal descendant Hunter Whitelaw (#4 red) of Lake Roosevelt takes the ball to the hoop for two points against Liberty (Spangle) on Friday (March 6) afternoon in the WIAA 2B boys basketball state tournament. 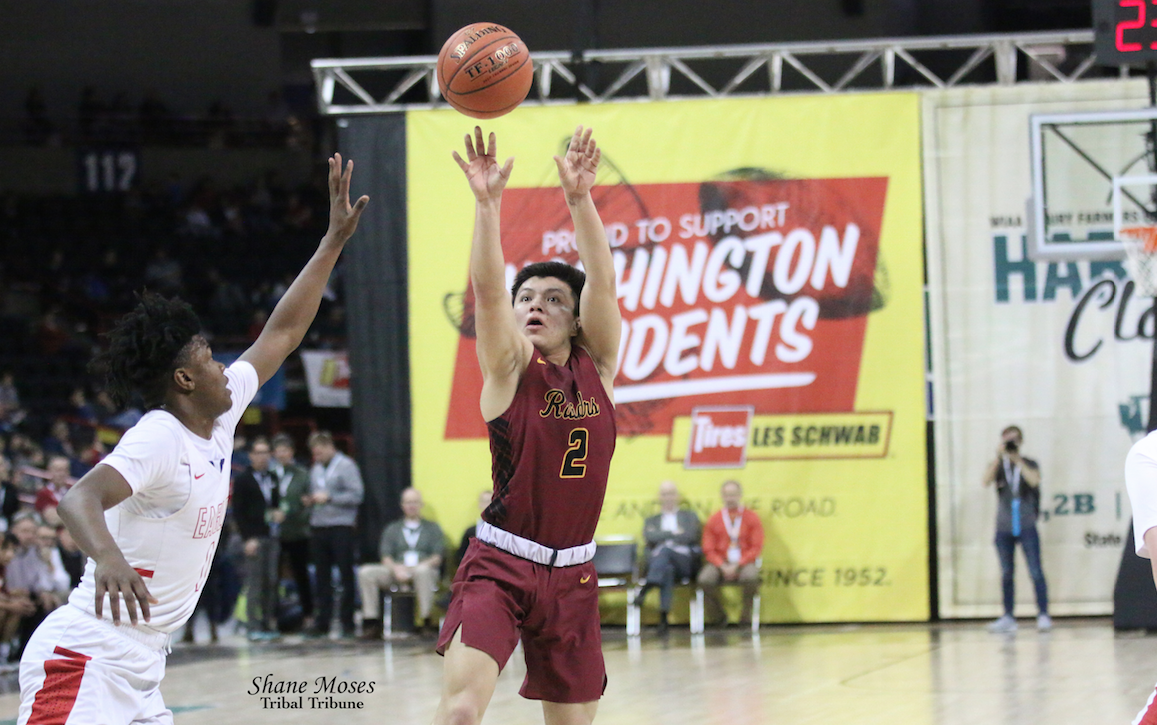 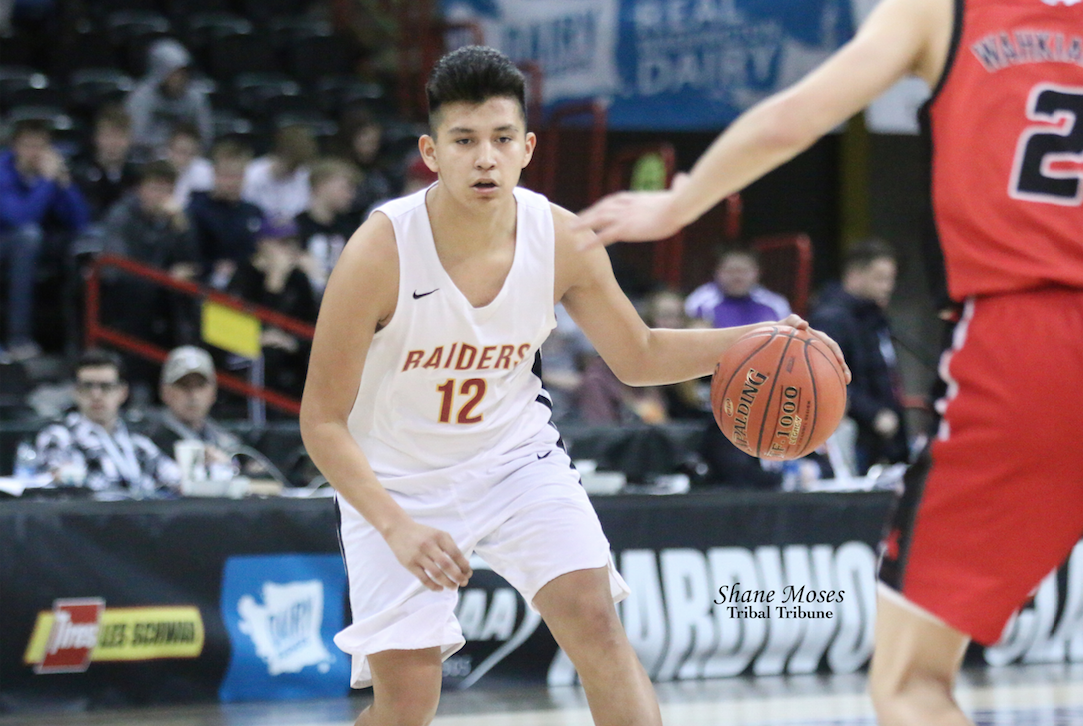 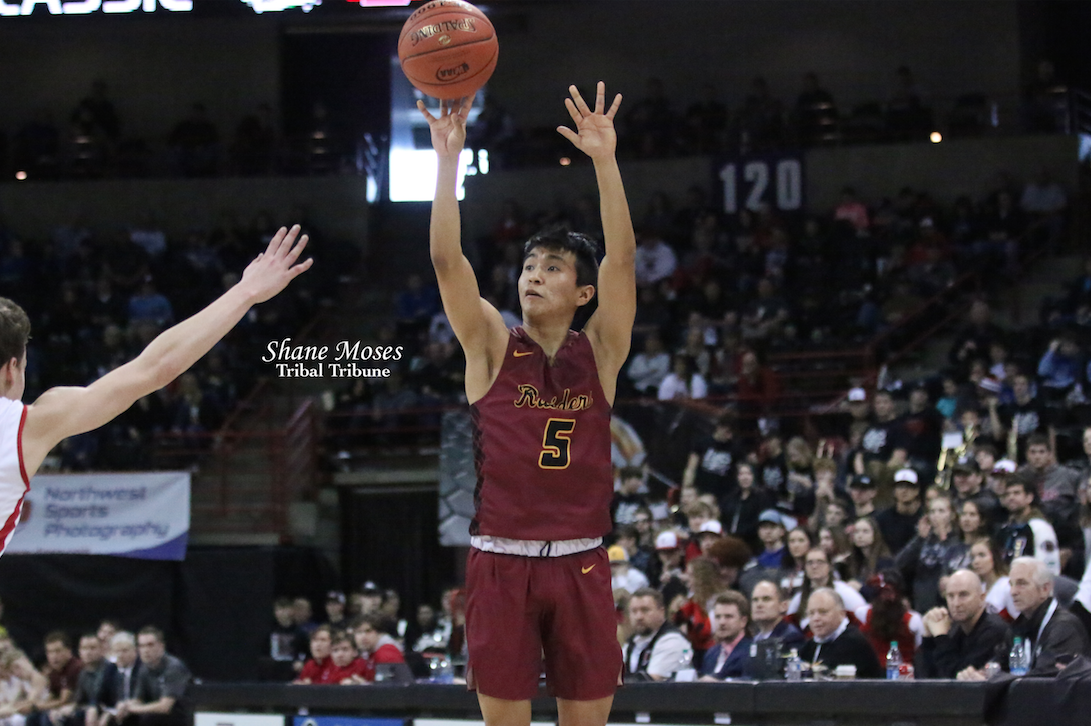 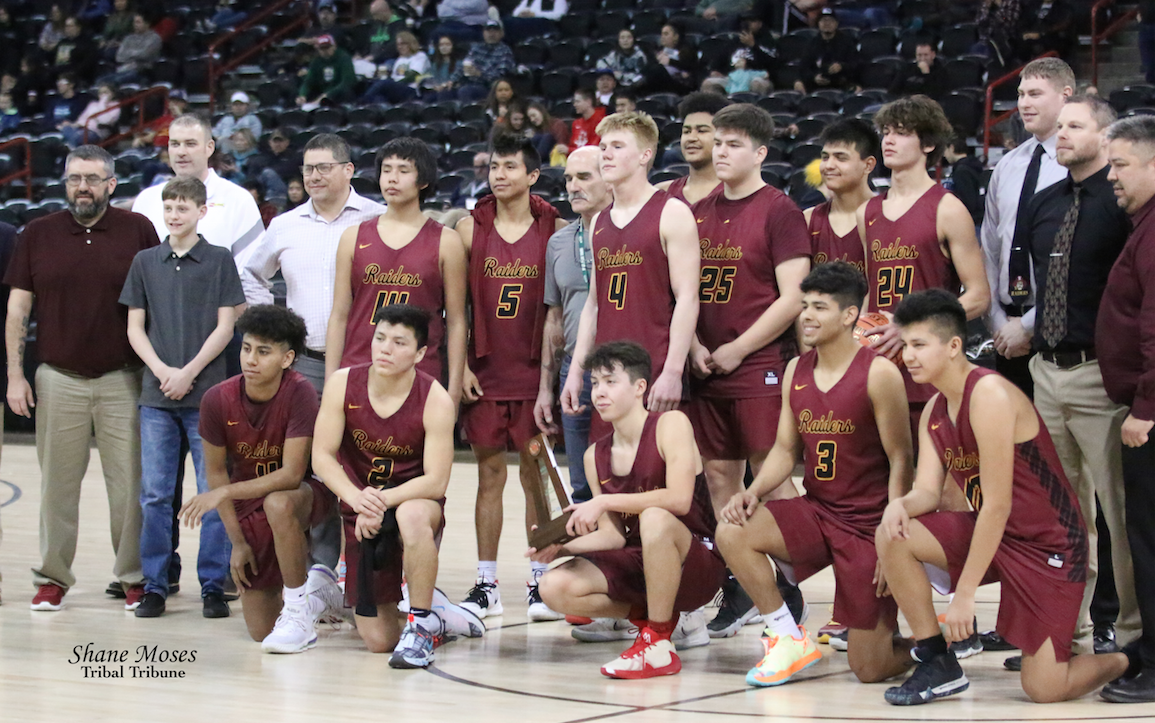 Players on the bench for Lake Roosevelt stand and cheer for their teammates against Toutle Lake in the 4th/6th place game on Saturday (March 7) morning. The Raiders held off Toutle Lake 49-46.

Colville tribal descendant Hunter Whitelaw (#4 red) of Lake Roosevelt takes the ball to the hoop for two points against Liberty (Spangle) on Friday (March 6) afternoon in the WIAA 2B boys basketball state tournament.

Raiders place 4th at WIAA 2B boys state tournament; second consecutive year of placing at the 2B hardwood classic

SPOKANE – Last year, Lake Roosevelt had to play at 8:00 a.m. in their final game of the WIAA 2B boys state tournament.

This year was a lot more agreeable as the Raiders would get a 9:30 a.m. tip off time.

It is safe to say, Lake Roosevelt took full advantage of the extra hour and half as they grinded out a 49-46 win over Toutle Lake for 4th place in this year’s WIAA 2B Boys state basketball tournament on Saturday morning at the Spokane Arena.

This year marks the second consecutive year that the Lake Roosevelt high school boys basketball team has brought home a trophy from the 2B Boys Hardwood Classic.

“This feels good,” said Soarin Marchand of Lake Roosevelt. “It’s not first, but it’s way better than not placing at all. A lot of our games have been close. I hit another big one. I am just hyped, just keep shooting.”

Just a few minutes into the fourth quarter, Toutle Lake had increased their lead to (42-39) but couldn’t hold off the Raiders.

Lake Roosevelt would turn up the intensity, offensively and defensively, ending the game on a 10-4 run in the final seven minutes.

“I mean it’s nice getting fourth and ending on a win,” said Hunter Whitelaw of Lake Roosevelt. “But we will get first. We’ll be here next year.”

Toutle Lake’s Zach Swanson heaved up a mid-court shot in an attempt to tie the game but would come up short, giving the Raiders the win.

These two teams played in the regional round, leading up to the state tournament. Toutle Lake got the best of Lake Roosevelt, winning 59-43 on Feb. 29 in virtually a home game for the Ducks. For that game, the Raiders had to travel over seven hours compared to Toutle Lake’s hour trip.

“We came and took fourth. I thought we could have done better, but it’s alright,” said St. Pierre. “We did better than last year.”

“I want to extend congratulations to the Lake Roosevelt Raiders’ young men for bringing home fourth and the Omak Pioneers for making it to the state tournament,” wrote Colville Business Council chair Rodney Cawston. “Getting to state required winning a lot of games and we are all proud of your hard work and dedication. Never, never give up achieving your dreams.”

SPOKANE – After falling behind early, Lake Roosevelt started chipping away at Life Christian’s lead, but eventually would run out of time.

The Raiders would see their hopes of making it to a state championship game come to an end as they lost to Life Christian Academy 57-46 on Thursday (March 5) afternoon in the quarterfinals of the 2B Boys Hardwood Classic at the Spokane Arena.

Despite the loss, the Raiders still had a shot to bring home a trophy from the state 2B boys tournament. They played Liberty (Spangle) in a loser out/winner advance format.

This year the Raiders held on for a 63-61 win over the Lancers, March 6, afternoon at the Spokane Arena in a loser out/winner advance format.

Lake Roosevelt’s defense and pressure forced Liberty’s Tayshawn Colvin to take an unbalanced shot with 3.8 seconds left, which he would end up missing giving the Raiders a nail-biting win.

Liberty entered the WIAA 2B Boys state tournament as the #1 seed. Lake Roosevelt entered as the #6 seed.

After falling behind in their first two state games, the Raiders took charge in their third game. They held a 15-14 lead after the first quarter and a 5-point lead (35-30) at halftime.

From there LR stretched the lead, getting up by 12 points at the 3:14 mark in the third quarter.  However, after building a dozen point lead, the Lancers would claw their way back.

Liberty (Spangle) kept chipping away and came to within one point on two different occasions of taking the lead but couldn’t.

Tribal members Cameron St. Pierre and Sam Wapato of Lake Roosevelt both scored 13 points apiece and both had three rebounds for Lake Roosevelt.

A surge of the bench, Jonathon Cante scored 12 points in 13 minutes of action.

Liberty entered the WIAA 2B state tournament with a 24-0 record. But after losing to Willapa Valley (71-62) in the quarterfinals, they would see their run at a state championship end and in their very next game would be eliminated from the 2B Hardwood classic with their second straight loss.

Lake Roosevelt would advance on to the 4th/6th game against Toutle Lake in the final game of the tournament.

Lake Roosevelt survives in opening round, knocking off Wahkiakum 62-59 in first round of 2B boys state tournament

Marchand juked his defender, creating open space. Clear, he shot from the top of the 3-point line, swishing the game-winning 3-point shot as time expired.

The basket gave the Raiders a 62-59 win over Wahkiakum on Wednesday in the opening round of the WIAA 2B Boys Hardwood Classic at the Spokane Arena.

“Shooters shoot, “ said Marchand. “That felt nice, probably one of the best feelings I’ve ever had. I knew I had to shoot it. I didn’t want any regrets.”

Lake Roosevelt, who played long stretches of the game having to play catch-up, advanced on to the quarterfinals of the 2B boys state tournament, ensuring themselves at least two more games after holding off the Mules in this winner advance/loser out game.

The Raiders would move on to play Life Christian Academy who they lost to last year in the 2019 2B boys state tournament, in this exact same round. They lost last year 64-44 to LCA.

Wahkiakum jumped out to an early 17-10 lead in the first quarter and would take a 8-point lead (35-27) into halftime.

As they’ve done a handful of times throughout the year, the Raiders turned up the intensity a notch in the third quarter going on to outscore Wahkiakum 20-9 to take a 3-point lead (47-44) heading into the fourth.

The Raiders held a 51-44 lead at the 5:54 mark in the fourth quarter but slowly the Mules started to creep back into the game.

Wahkiakum’s Jake Leitz would come down on the other end of the floor and you might have guessed it. He made a 3-point shot, giving the Mules a 59-57 lead with 1:21 left in the game.

Cameron St. Pierre (Colville tribal member) of Lake Roosevelt didn’t have his best game offensively but was able to contribute in other ways.

He stole the ball with less than a minute to go, drawing a foul as he drove to the hoop. St. Pierre would go on to make both free throws, tying the game at 59-59 with 44 seconds left in the game.

Both offenses stalled for the remaining 40 seconds as Marchand would go on to convert the game winning shot as time expired.