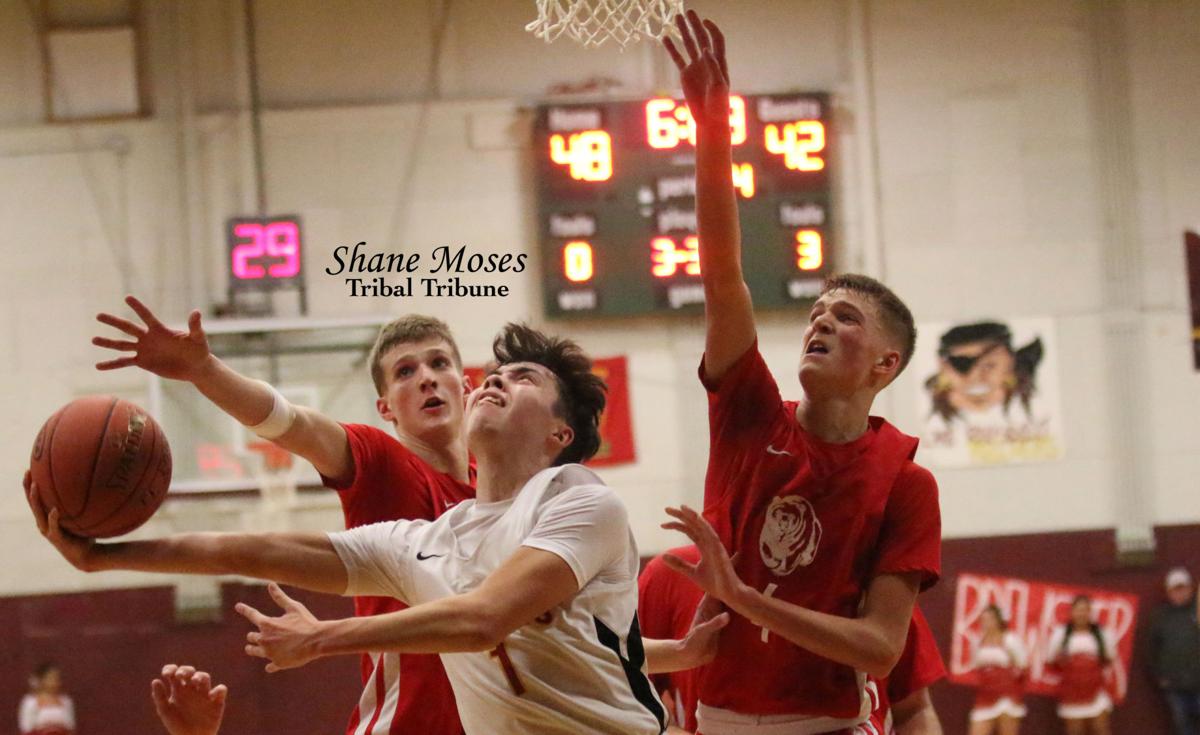 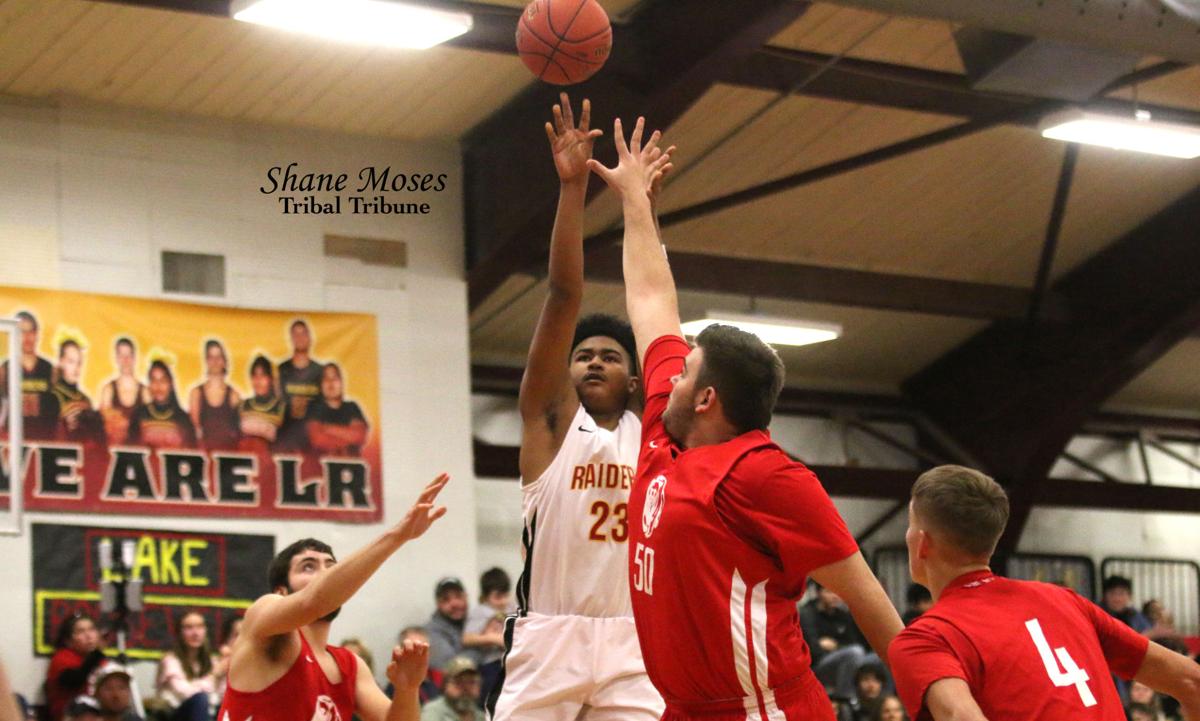 Colville tribal member Tyler Jordan (#23 white) of Lake Roosevelt gets a shot up and over the arm of 6-foot-7 Conner Ashworth of Brewster on Tuesday (Jan. 7) night 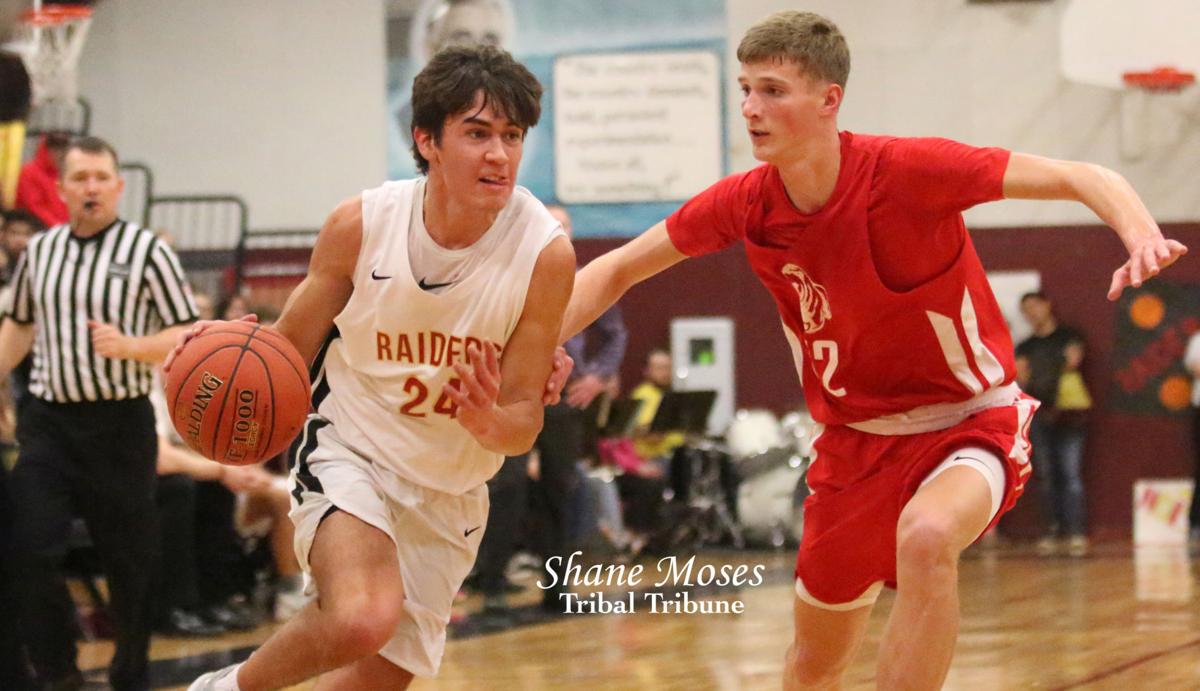 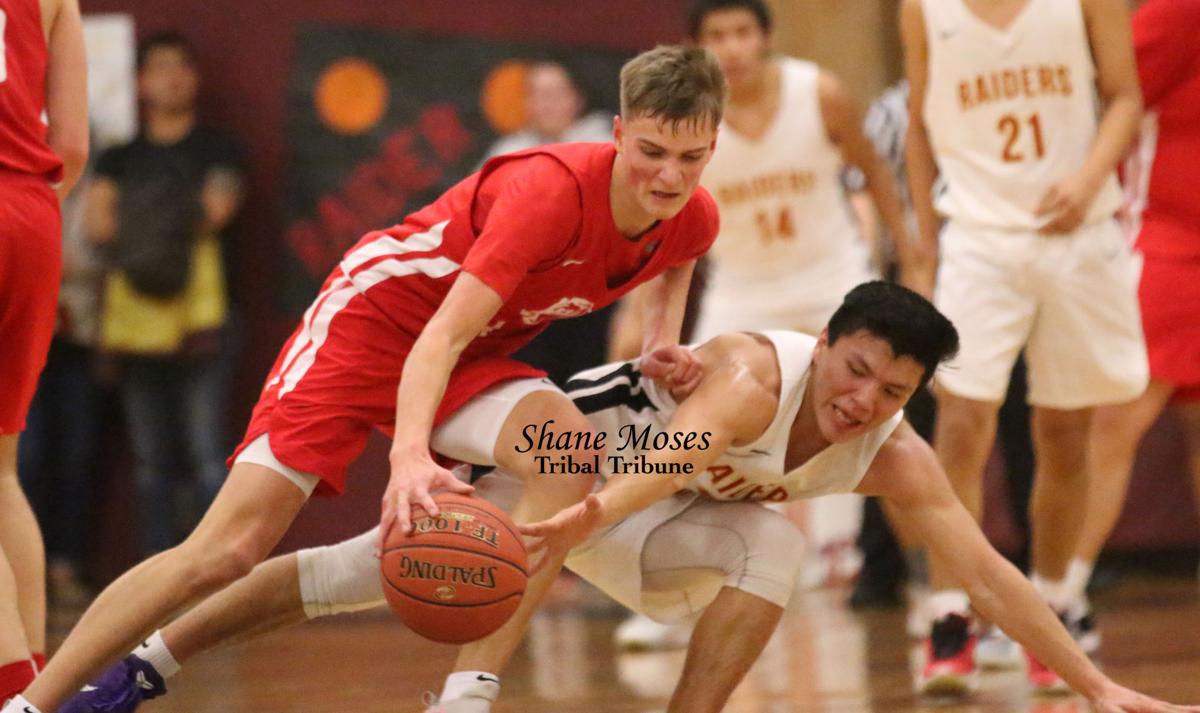 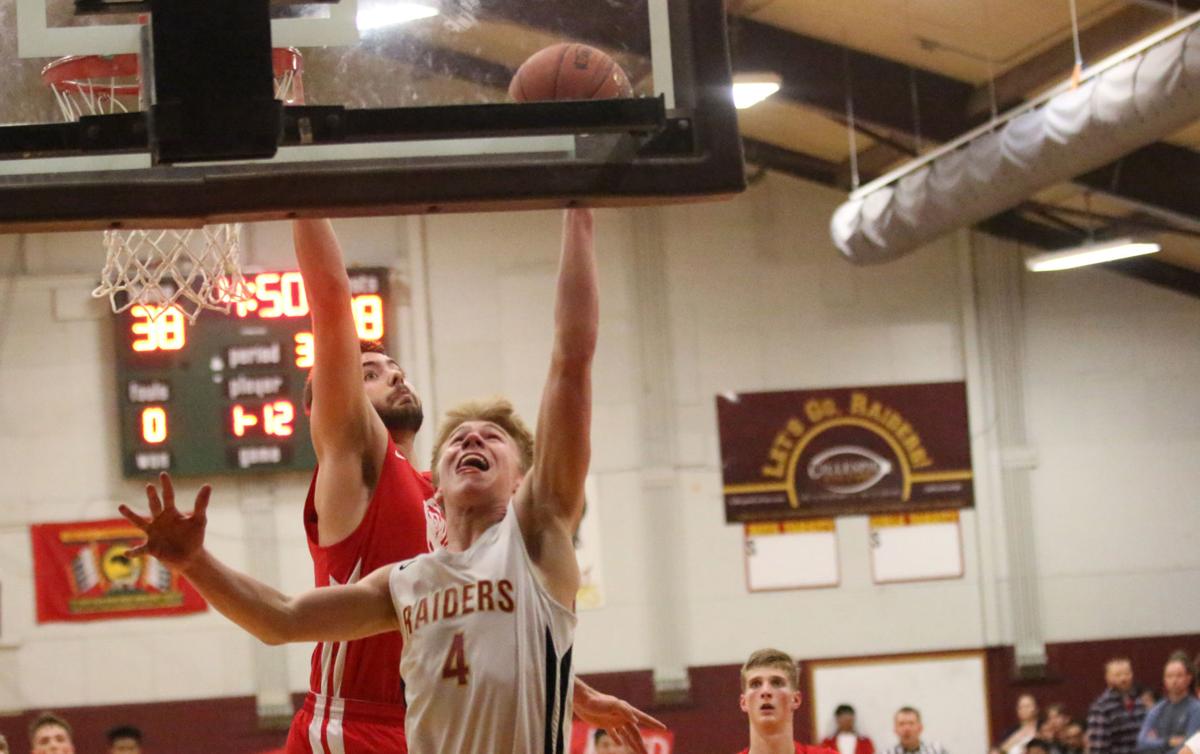 Colville tribal member Tyler Jordan (#23 white) of Lake Roosevelt gets a shot up and over the arm of 6-foot-7 Conner Ashworth of Brewster on Tuesday (Jan. 7) night

Lake Roosevelt takes control in the second half, beating Brewster 67-54 and moving up to first place in CWB 2B league standings

COULEE DAM – Balanced scoring combined with a suffocating defense in the second half propelled Lake Roosevelt to a 67-54 win over Brewster on Tuesday evening in Central Washington 2B league action.

“We’ve been looking forward to this game for awhile,” said Jeremy Crollard, head coach for Lake Roosevelt. “Our kids stepped up to the challenge tonight. It’s awesome for these kids, and it’s awesome for this community.”

Brewster held a 34-30 lead at halftime but would find it harder to score in the second half.

The Raiders turned up the intensity a notch in the third quarter and it showed on the defensive end, as Brewster would score a combined 20 points in the third and fourth quarter.

Sam Wapato (Colville tribal member) started the momentum shift as he drained a 3-point shot at the 6:58 mark in the third quarter to bring Lake Roosevelt to within one point (34-33). A minute later, he would sink another 3-point shot to tie the game at 36-36.

With Brewster on the ropes, a big part of the Raider comeback?

The Raiders would close out the third quarter with an eight-point lead (48-40) over the Bears.

Brewster managed to cut the lead down to four-points (48-44) at the 5:39 mark in the fourth quarter but would draw no closer after that.

Hunter Whitelaw (Colville tribal descendant) of Lake Roosevelt found himself out on the 3-point line with no Brewster defender in sight.

Whitelaw stepped up and rattled in a 3-pointer, giving the Raiders a 51-44 lead at the 5:22 mark of the fourth.

“He’s the kid that every coach would love to have,” said Crollard. “He’s the heart and soul of the team.”

A pair of Whitelaw free throws would give the Raiders a 56-44 lead with 2:55 left in the game and Lake Roosevelt would eventually grind out a 13-point win (67-54) over their long time rivals.

The Raiders had four players score in double figures, as Whitelaw led the way with 15 points for the Raiders. Wapato finished with 13 points. Jordan had 11 points and St. Pierre scored 10 on the night. Colville tribal members Soarin’ Marchand finished with eight points and Adam George had three points.