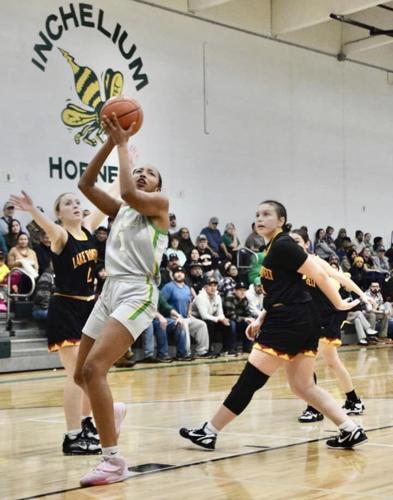 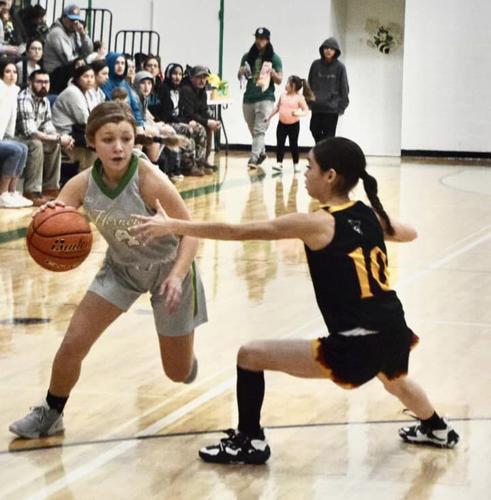 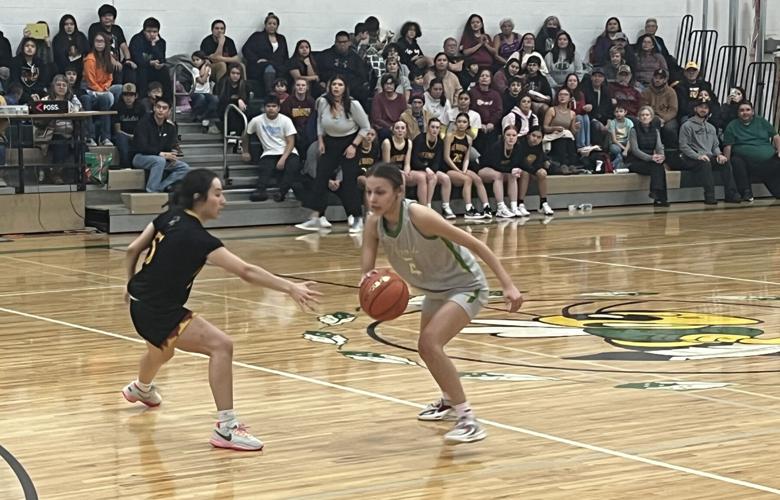 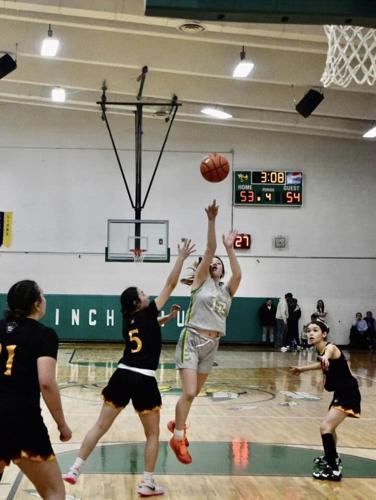 Colville tribal member Bella Finley of Inchelium gets a shot up against Lake Roosevelt on Wednesday (Jan. 4) evening from Inchelium HS. 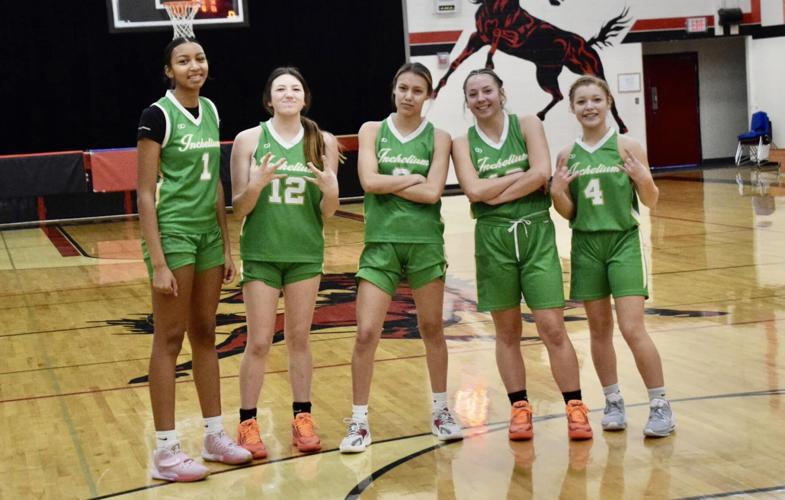 The Inchelium High School varsity girls basketball team stops for a photo before their game against Northport in NE1B League action on (Dec. 12).

Colville tribal member Bella Finley of Inchelium gets a shot up against Lake Roosevelt on Wednesday (Jan. 4) evening from Inchelium HS.

The Inchelium High School varsity girls basketball team stops for a photo before their game against Northport in NE1B League action on (Dec. 12).

INCHELIUM, WA. – January 4–The Inchelium Hornets hosted the Lake Roosevelt Raiders in non-conference play. The Lady Hornets were ranked #4 in state with a 5-1 record before tipoff. The Lady Raiders brought in a 2-1 record under new Coach Melissa Meza. Inchelium and Lake Roosevelt were tied at the end of four quarters, 52-52. In Overtime, it would be the Lady Hornets with the slim victory, 59-56.

In the first quarter, the Lady Raiders would rely on the play of Cylia St. Pierre for the majority of their scoring, while the Lady Hornets had production from five different players. Senior Zalissa Finley who stands 6’1” had an impact on the game with her height and length that made it difficult to score in the lane, and cleaned up the rebounds, giving key second chance opportunities down the stretch. The game was close, 14-12, in favor of Lake Roosevelt after the first quarter.

Inchelium continued its balanced attack through the second quarter, getting points from five different players: Finley, Anne Marie Simpson, Hailey Peone, Tiana Flett, and Torrence Finley. Lake Roosevelt relied on the steady play of St. Pierre, while she got help from Juniors Raeley Portch and Carly Neddo. The lead for either team never exceeded four points and it was knotted up at 27-27 heading into Halftime.

The Third Quarter was low scoring for both teams. There were nine team fouls whistled that kept either team from getting in a rhythm, and it was Inchelium leading Lake Roosevelt, 35-34, heading into the fourth quarter.

The action in the fourth sped up, as both teams would match each other with jumpers and three-point field goals made. Finley and Simpson each had a three pointer for Inchelium. Aaliyah Marchand of Lake Roosevelt sank three shots beyond the arc, as coach Lonnie Simpson implored his players to guard her even as she stood a few steps behind the three-point line. Lake Roosevelt’s defense heated up at the end of regulation, but was unable to convert the last possession into any points and the game went to Overtime, 52-52.

Lake Roosevelt won the tip and quickly turned the ball over, and committed a foul trying for a steal that sent Peone to the freethrow line for the Double-Bonus. She made the first to take the lead, 53-52, but a lane violation negated the next free throw. Lake Roosevelt’s Carly Neddo had a nice cut down the lane where Aaliyah Marchand found her for two points, to take the lead, 54-53.

Lake Roosevelt called a timeout with 1:50 to play, the Home team had 8 team fouls to the Guests’ 10. St. Pierre scored two for Lake Roosevelt and it was tied 56-56. Isabella Finley hit a go-ahead three and LR took another timeout with 1:05 in Overtime remaining, trailing Inchelium, 59-56.

Isabella Finley blocked Shyanne Marchand’s shot after the timeout on a set play. A jump ball gave the possession back to Lake Roosevelt. Raeley Portch missed a three to tie the game. Inchelium corralled the rebound and Coach Lonnie Simpson called for a timeout with 15 seconds left to play.

Inchelium beat the press on the in-bound, but missed two free throws that would have sealed the game. Talliyah Timentwa had a good look at three to tie it, but her shot bounced off the rim. LR fouled with 1 second remaining. Isabella Finley missed two free throws and the clock expired to the delight of the Inchelium faithful in favor of the Lady Hornets, 59-56.

Inchelium has now won 13 consecutive games as they are 14-1 on the season and 9-0 in NE 1B League action.

The Lady Hornets have three games remaining on the season with a home game against Wellpinit on Jan. 24, followed by a road game at Mary Walker on Jan 28 and Senior Night on Feb 1 against Cusick to close out the regular season.