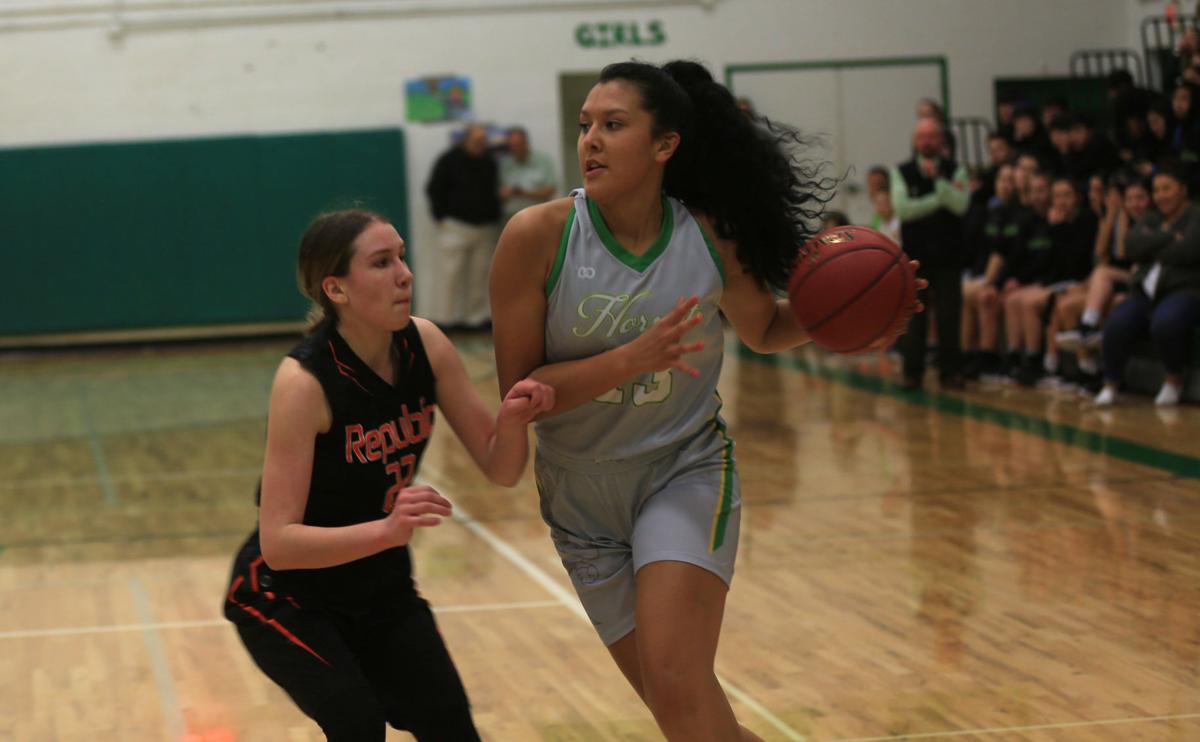 Tribal member Mia Pakootas (#13 grey) of Inchelium drives to the basket against Republic in NE 1B League action on Dec. 17. 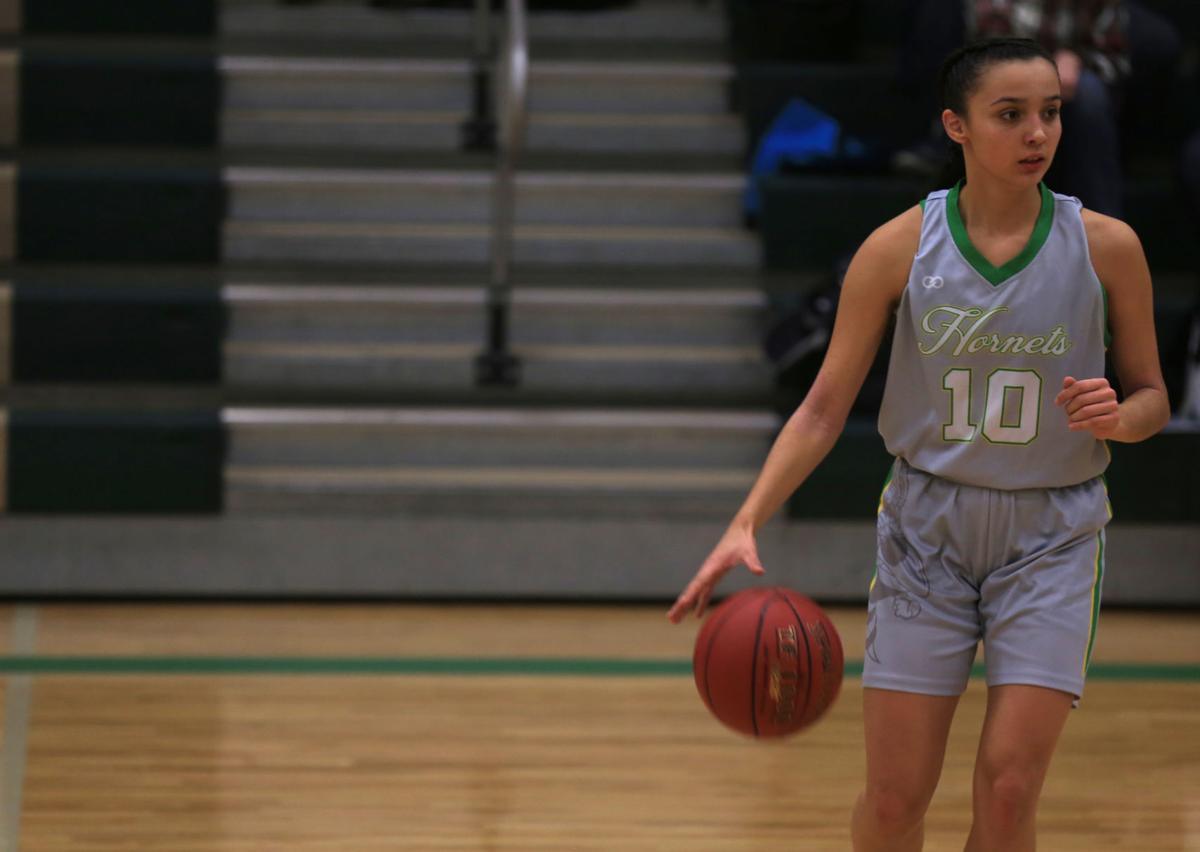 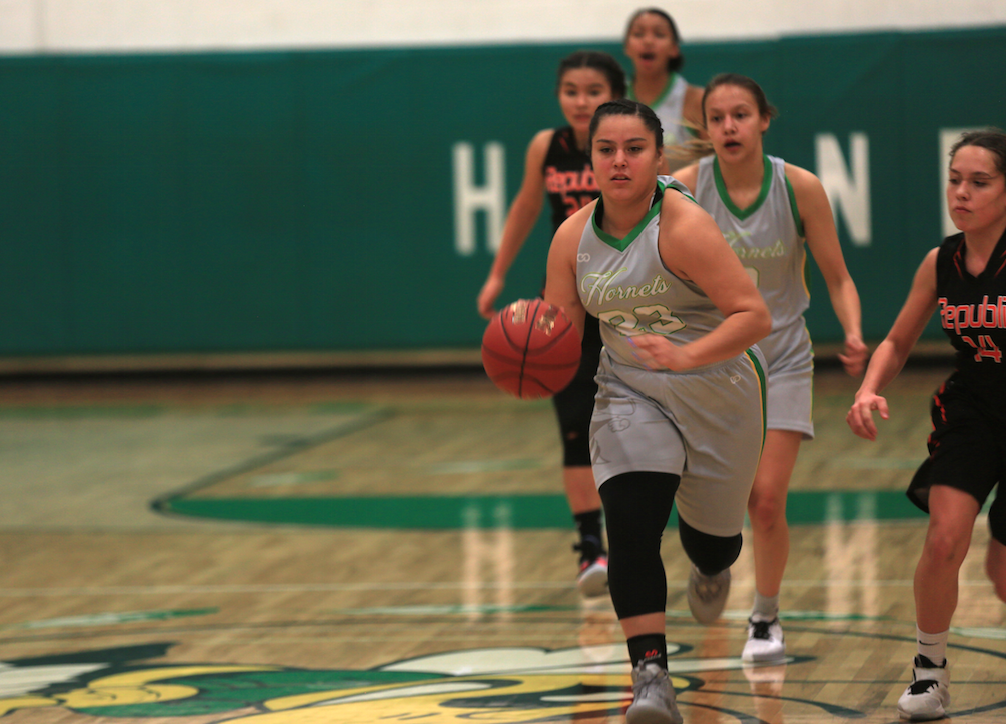 Tribal member Erika Romero (#23 grey) of Inchelium dribbles down the court against Republic in NE 1B League action on Dec. 17. 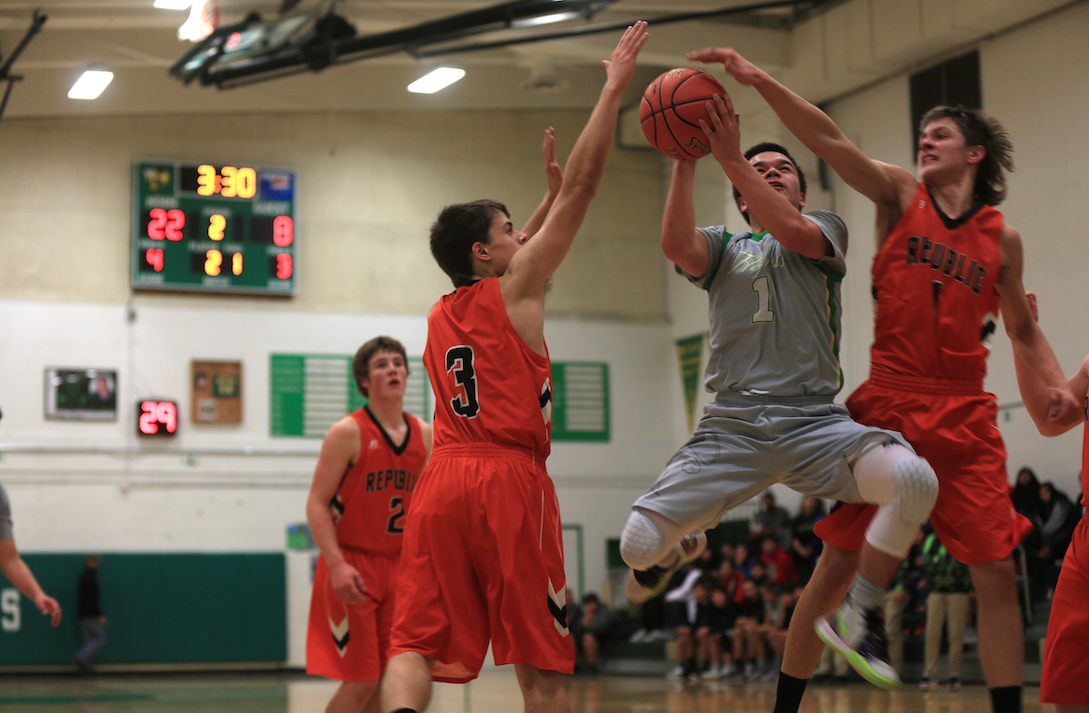 Tribal member Isaiah Seymour (#1 grey) of Inchelium drives to the hoop against two Republic defenders on Dec. 17 in NE 1B League action. 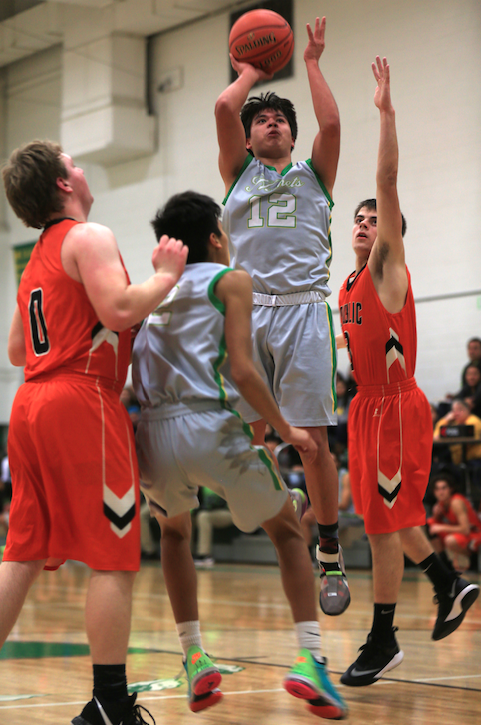 Tribal member Robert McKinney (#12 grey) of Inchelium drives to the hoop against two Republic defenders on Dec. 17 in NE 1B League action.

Tribal member Mia Pakootas (#13 grey) of Inchelium drives to the basket against Republic in NE 1B League action on Dec. 17.

Tribal member Erika Romero (#23 grey) of Inchelium dribbles down the court against Republic in NE 1B League action on Dec. 17.

Tribal member Isaiah Seymour (#1 grey) of Inchelium drives to the hoop against two Republic defenders on Dec. 17 in NE 1B League action.

Tribal member Robert McKinney (#12 grey) of Inchelium drives to the hoop against two Republic defenders on Dec. 17 in NE 1B League action.

There’s a buzz around Inchelium this winter. Fans are flocking to the gym in support of their winning boys and girls basketball teams.

There wasn’t much seating room available in mid-December as the Hornet faithful packed the Inchelium School Gymnasium to get another glimpse of their two exciting teams.

The girls’ team has fans believing they’ll not only be back at the State 1B Girls Basketball Tournament, but they will surpass last year’s success — and perhaps make history by besting their 4th place finish in 2007. The boys’ team shows flashes of postseason potential as well after last year’s winning season.

Not so surprising is the success of the 10-2 girl’s team, which added the towering 6-foot-2 transfer Mia Pakootas (formerly Smith) from Lakeside High School, where she was a standout volleyball player.

The boy’s team, however, is also on a good track at 5-4, and has also added a Pakootas — head coach Chrystal, Mia’s mother, whose credentials include earning a basketball scholarship to UCLA.

During a match with Republic in December, the Hornet teams showcased their potential, with the girls winning 76-22, followed by a 56-43 boy’s victory.

“I think this year’s team is just more functional,” Desautel said. “We just play the game all-around: We have the guards, we have the posts this year. We’re a lot faster this year, so I think we’re going to compete at state really well.”

Inchelium is ranked No. 2 in the state’s RPI rankings behind 10-0 Pomeroy, who finished as runner-up to Colton last year at state. Offensively, no team in the district can come close to the Hornets, who have scored 820 points through 12 games. The Inchelium girls have lost a couple nail-biters this season, though: 60-57 to Curlew and 63-55 to Yakama Nation Tribal School. Head coach Ted Torzewski said there’s still room to grow.

“The girls are working hard every day in practice. They’ve just got to string through four quarters of basketball,” he said. “The girls have to work hard every game and we’ve gotta stay out of injury. We’ll be there (in the postseason).”

Potential is booming on the boy’s side. They appear to be buying into Pakootas’ respect-driven coaching philosophy. Assistant coaches J.D. Wilson and Brandon Kohler, both tribal members, provide valuable input and mentorship.

“I think the boys are giving us all they’ve got right now,” Pakootas said. “Their attitude’s changed this year. Their attitude on the court toward other players, towards each other, toward the crowd, and now the attitude toward their homes and the school. Everything’s looking up for the boys. It’s great.”

Many fans wanted to tell me how impressed they were with Isaiah Seymour. By the end of a back-and-forth game with Republic that saw each team go blow-for-blow for three quarters until Inchelium pulled away, it was clear that he —a 5-6 senior point guard with good ball-handling skills and a penchant for acrobatic drives to the rack — is a leader to lean upon.

“The boys stuck together,” Pakootas said. “It was their own plan to make sure all they had to do was keep boxing out and keep fighting hard. They’re just taking baby steps every game.”

Upperclassmen Lonnie Simpson, Payton Boyd and Robert McKinney are also key to this year’s success; while freshmen Amari Pakootas, Isaac Hoskie and Garrett Mason bring high energy on both sides of the ball.

The Hornet boys boast a 5-4 record thus far, including 4-2 in district play. They’ve scored 459 points and allowed 449. Compare that to the district’s top team in Odessa (7-0), whose scored 487 and allowed 273, and the difference is defense.

“I think our quickness is one of our greatest strengths,” Pakootas said. “And that comes with Isaiah Seymour, Robert McKinney; Garrett Mason is a beast on our press. We have Payton and (Lonnie), and they’re our big guys and they’re still running the floor. We’ve always been a run-and-gun type of team, but now we can go inside, outside — and that’s our strength, we just need to be able to control it for four quarters.”

In returning home, Pakootas said she didn’t have aspirations to be a coach.

“It feels so good coming home and it feels so good to have everyone in our community coming to our games and cheering on our kids,” she said. “I didn’t come back to coach our teams. I came to be a parent in the stands. When it came down to it, the boys said, ‘We want you.’ I told them to make sure they want me, because I’m tough.

“I barely have a voice right now,” she added. “I’m yelling at them and catching their attention and telling them how great they are every time I can. For all the boys to want to listen, want to learn, to want to do better in school, to want to do better home and make good decisions out just so they can stay in this gym… I’m all for it. I’ll do whatever I can for these boys.”

Pakootas coaches in a gymnasium that features a familiar face, the late tribal member Jerry Signor, on the wall as a tribute for his decades of positive impact in the community.

“Jerry Signor brought a lot to the community. He brought a lot to me,” Pakootas said. “It really means a lot because Jer brought spirit everywhere he went. Here he would have been the loudest in the stands. I try to make that myself."