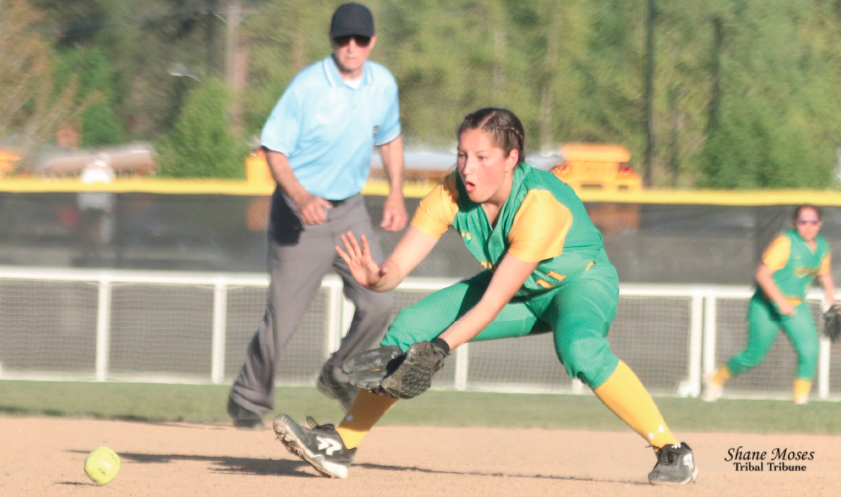 Tribal member Rylee Desautel shortstop for Inchelium fields a ground ball against Sunnyside Christian in the first round of the Regional 5/6 and 7/9 softball tournament last year at the Dwight Merkel Softball Fields in Spokane. Inchelium would go on to win 11-0. 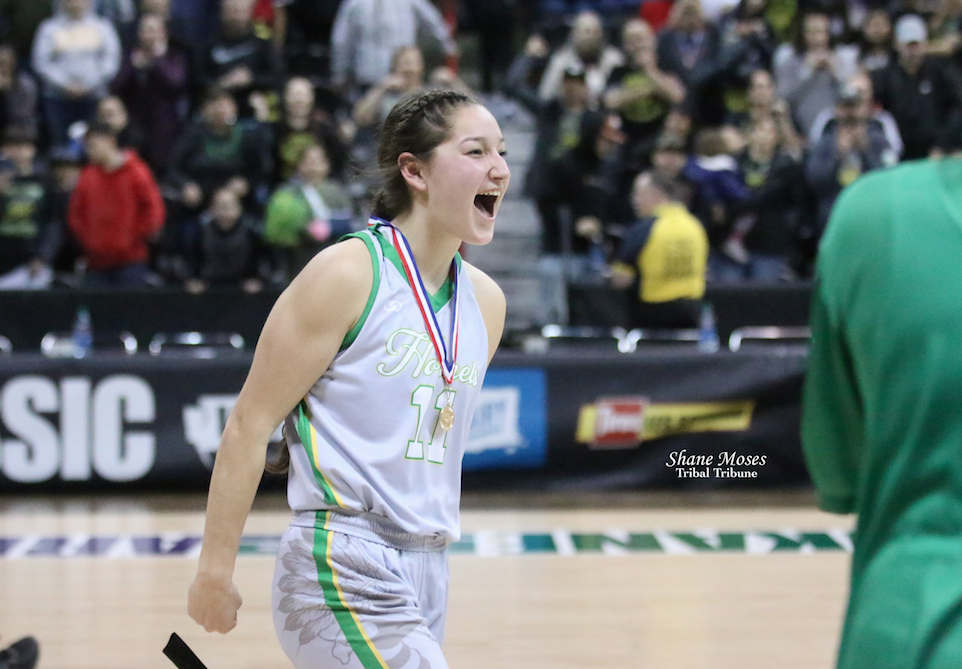 Tribal member Rylee Desautel of Inchelium cheers and celebrates after helping Inchelium beat Mount Vernon Christian in the semifinals of this year’s girls 1B state tournament. She was awarded with the sportsmanship award after the game.

Tribal member Rylee Desautel shortstop for Inchelium fields a ground ball against Sunnyside Christian in the first round of the Regional 5/6 and 7/9 softball tournament last year at the Dwight Merkel Softball Fields in Spokane. Inchelium would go on to win 11-0.

Tribal member Rylee Desautel of Inchelium cheers and celebrates after helping Inchelium beat Mount Vernon Christian in the semifinals of this year’s girls 1B state tournament. She was awarded with the sportsmanship award after the game.

INCHELIUM – This wasn’t how her senior year was supposed to end for Rylee Desautel of Inchelium.

Normally she would be going to school with her fellow classmates, enjoying their last months of school together, learning and getting ready for graduation.

After school got out each day, she and her fellow teammates would make their way down to the softball field and start their process of getting a minimum of 10 practices in before they could play their first game.

Now, with the Coronavirus affecting the entire world, sports have been called off in the state of Washington by the governing sports body, the WIAA, and with that the hopes and opportunity to win another state championship as well.

“I am truly devastated for my senior classmates on the softball team,” said Desautel. “My major disappointment is not being able to spend this time with my friends. We were all excited to spend these last few months together.”

The past two years, Inchelium’s softball team has placed third at the 1B Girls softball state tournament. Many of the athletes, like Desautel, were looking at the softball season having just won the WIAA 1B Hardwood State Basketball tournament championship.

So this year, with a senior heavy squad, a deep run in the state tournament was in the cards for the Lady Hornets.

“We all were so excited about the season,” Desautel said. “Especially for the chance to win another state championship.”

Despite not getting to share more memories with her fellow classmates and softball teammates and perhaps another state title, Desautel is one of the few that will continue onwards with their athletic career.

“I am fortunate enough to not be completely done. I still have college to play,” she says. “But most of my classmates will never get to play organized sports again”

Desautel, who played shortstop and pitched, will bring her bat to Pasco.

“I am so excited to go to Columbia Basin College,” she says. “I cannot wait. It really is a dream come true for me.”

On top of getting the opportunity to play at the college level, Desautel also excels in lots of other areas.

She was featured in KXLY’s Shining Star segment.

“I enjoyed the segment. It made me feel accomplished. Even though it was inspired by my senior year being cut short,” she explains. “It was nice to hear all that I have done in my high school years. Highlighting the State Championship was definitely the best part.”

And that state championship? Desautel helped Inchelium win their first ever girls state title on March 7 when they beat Oakesdale 46-34 for the girls 1B state title where she’s an all-state player.

Not only an exceptional athlete, Desatuel also pulls her weight in the classroom.

“Being a part of running start and earning my AA has always been a goal of mine,” said Desautel. “I remember when one of my cousins graduated with her AA. I was so inspired, believing that I could do it too. So now, I hope that I can show kids that you can do it all, running start, sports and extracurricular activities.”

Desautel is the daughter of Galen and Bridgett Desautel and has two younger sisters.

The WIAA has received clarification that the order issued by Governor Inslee on Monday includes the cancellation of all in-person extracurricular athletics and activities through the end of the school year. This will include all regular season contests and practices as well as all postseason tournaments and championship events.

The decision was undoubtedly a difficult one for Governor Inslee. However, it was done so to keep the students and families of Washington safe. The WIAA Executive Board and the WIAA Staff feel for those students around the state that have had their seasons or careers cut short. This terrible disease has not only prevented students from creating lifelong memories through competition, it has limited the valuable lessons gained through participation in education-based athletics and activities.

The WIAA will continue to work with member schools around the state of Washington to navigate this unprecedented time. We have already seen some outstanding examples of athletic directors and coaches making the best of their situations and we know that work will continue.