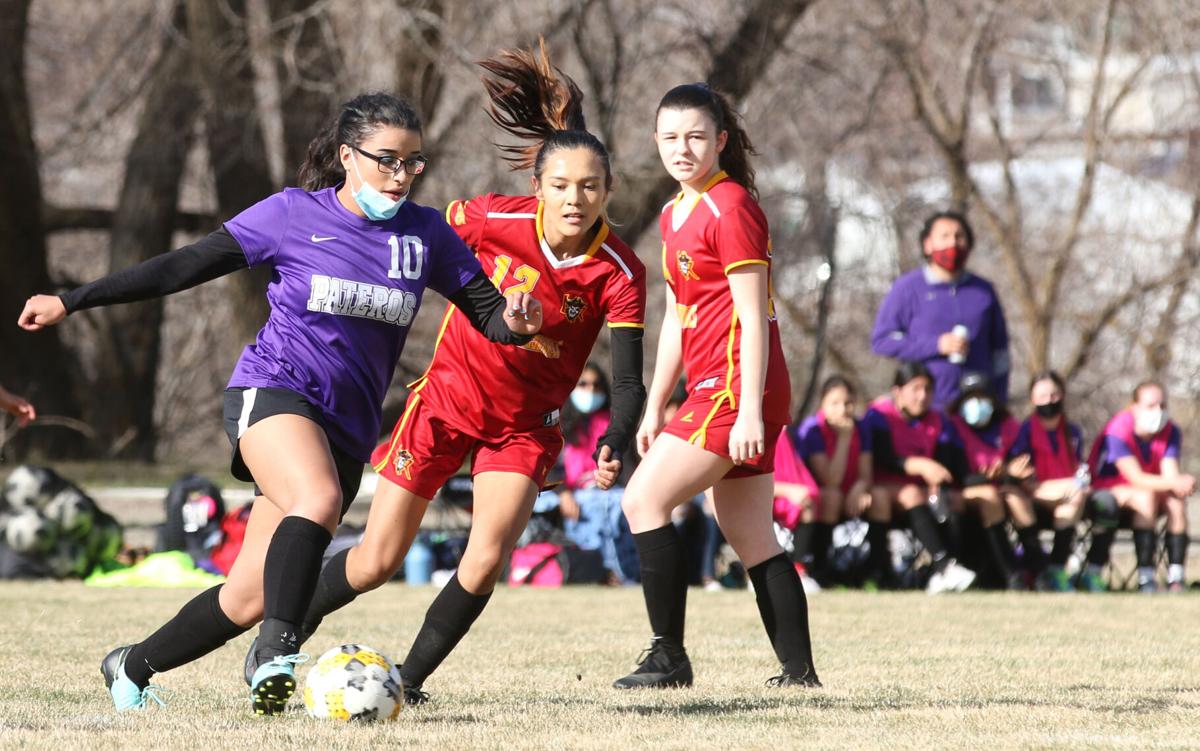 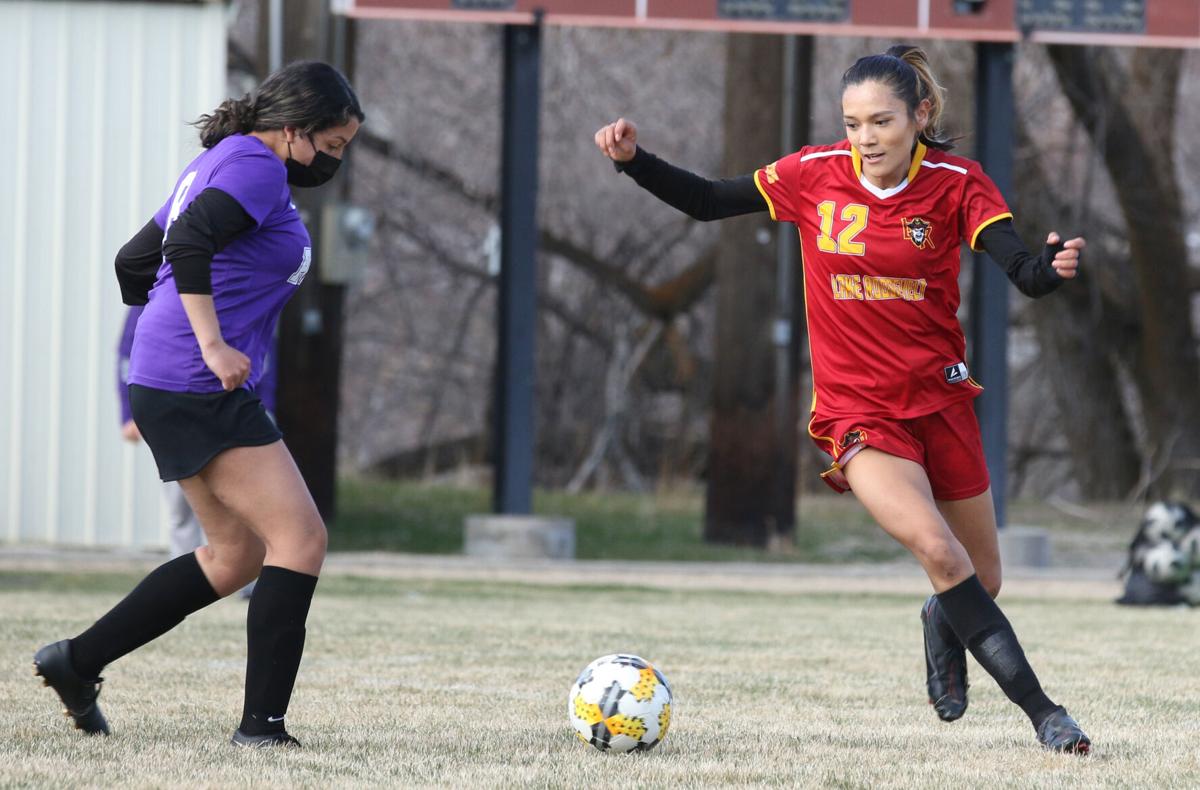 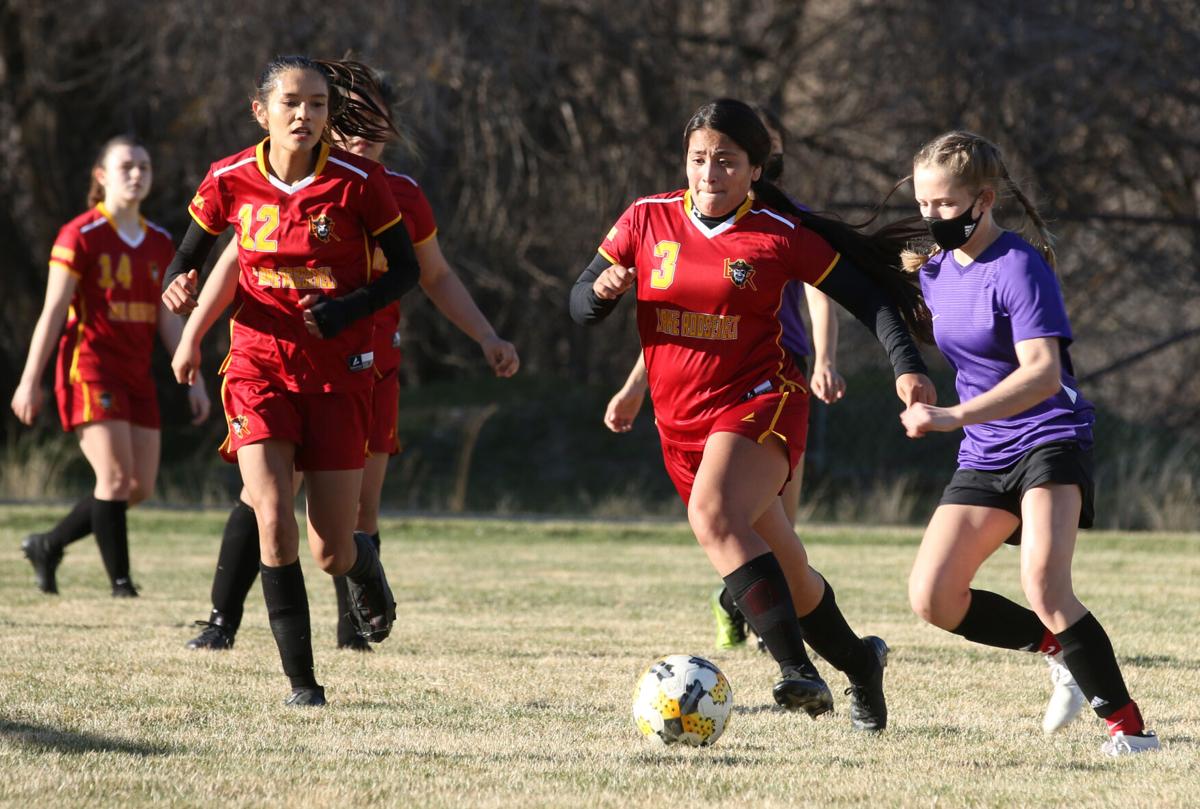 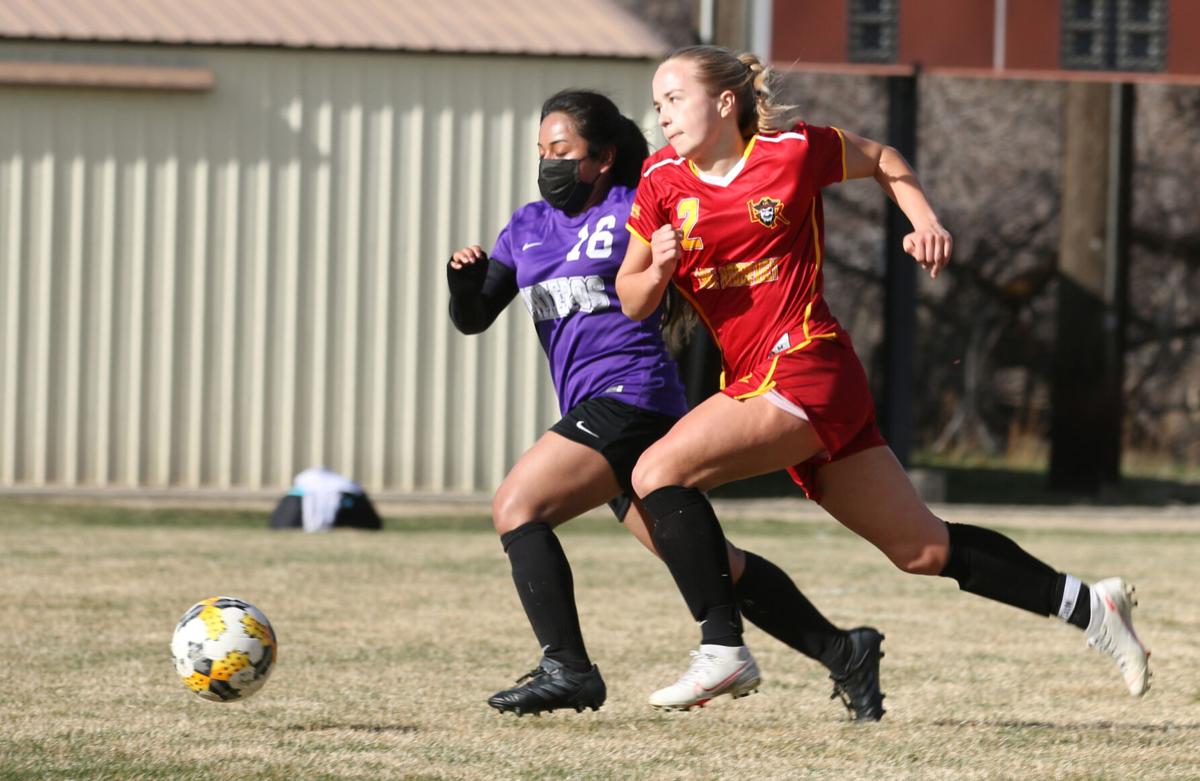 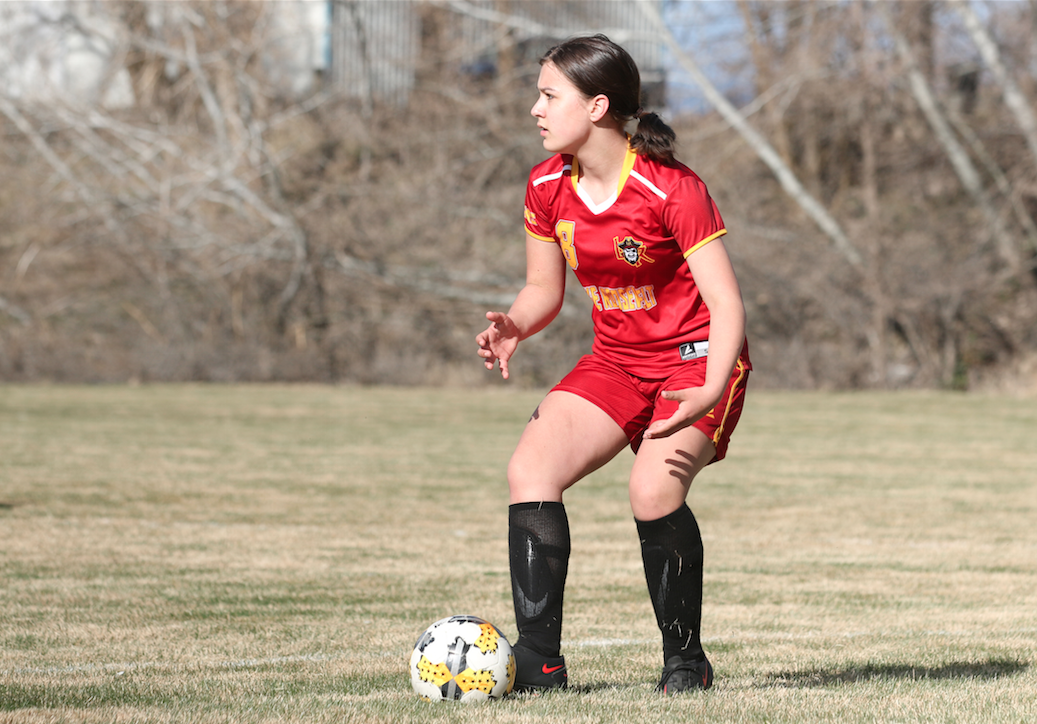 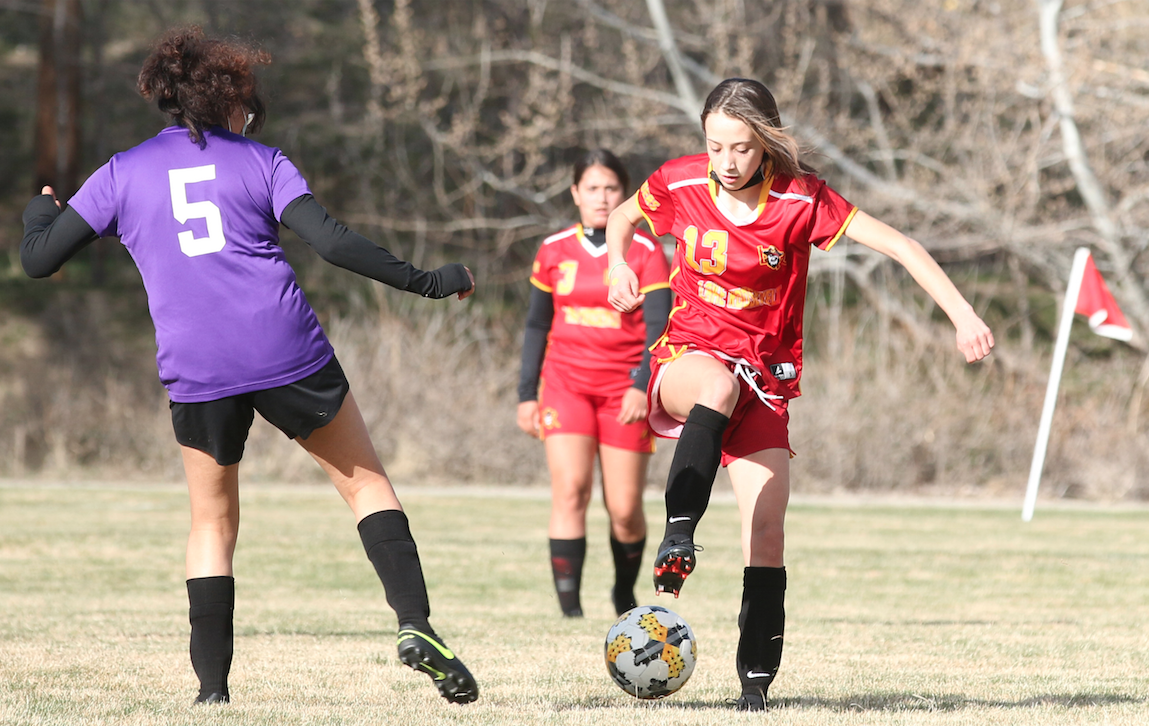 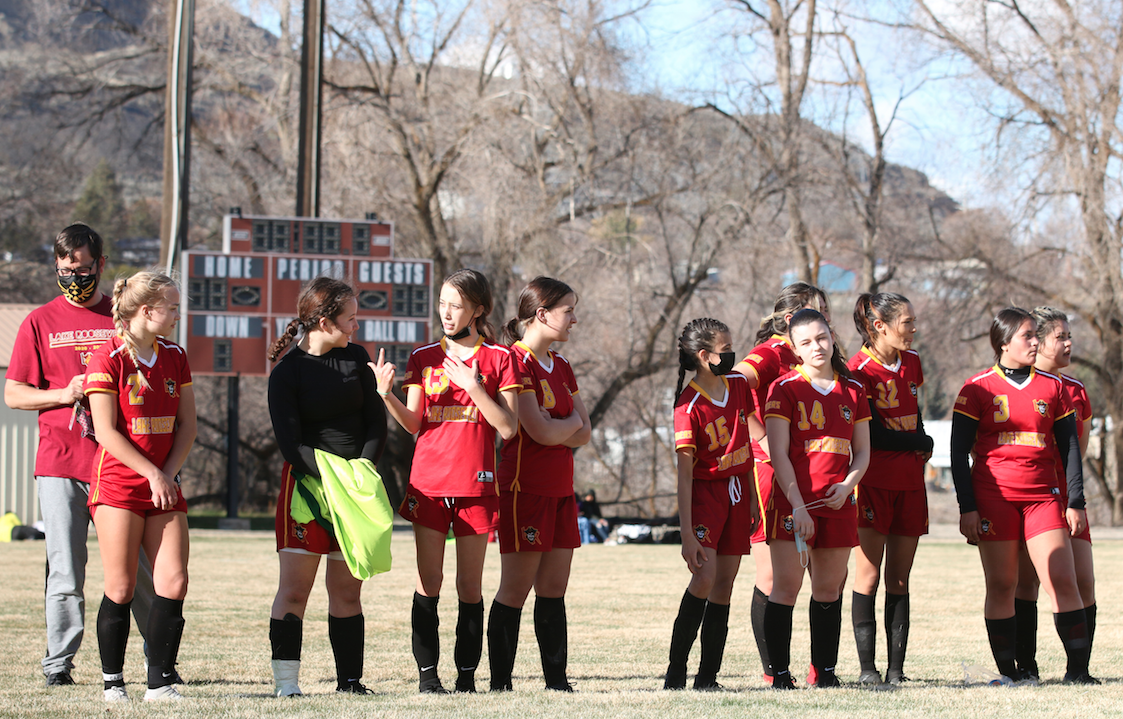 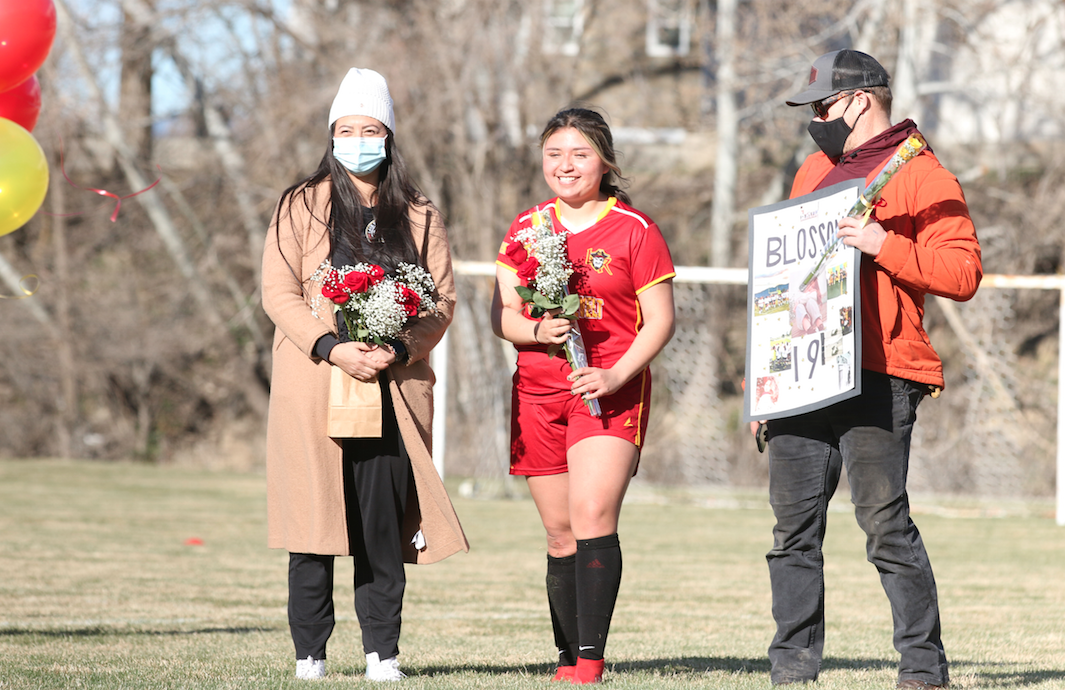 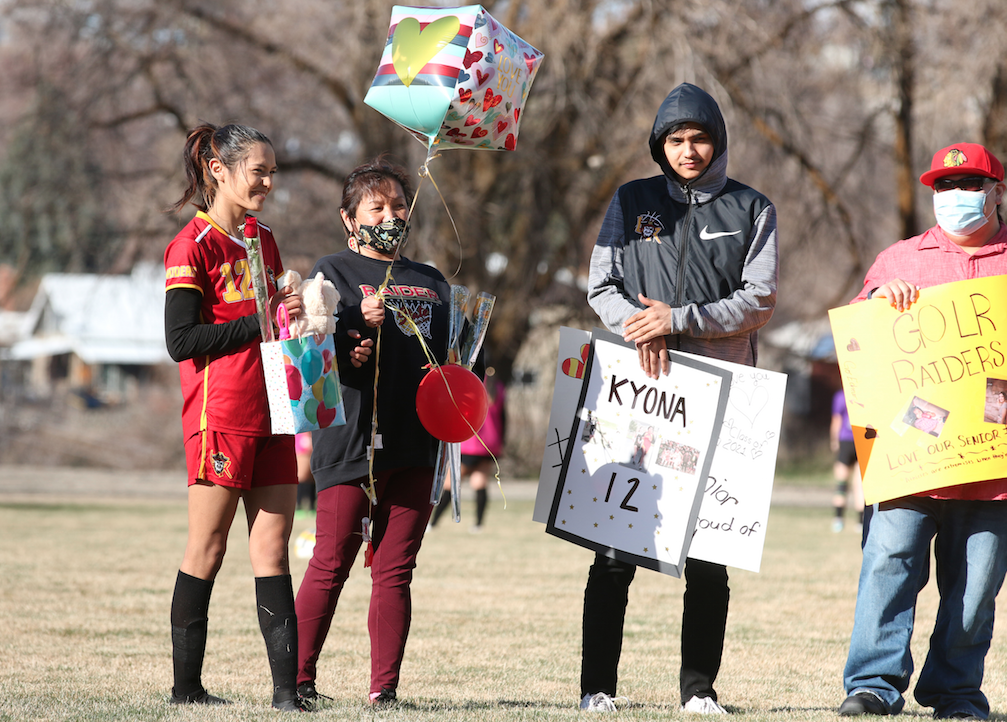 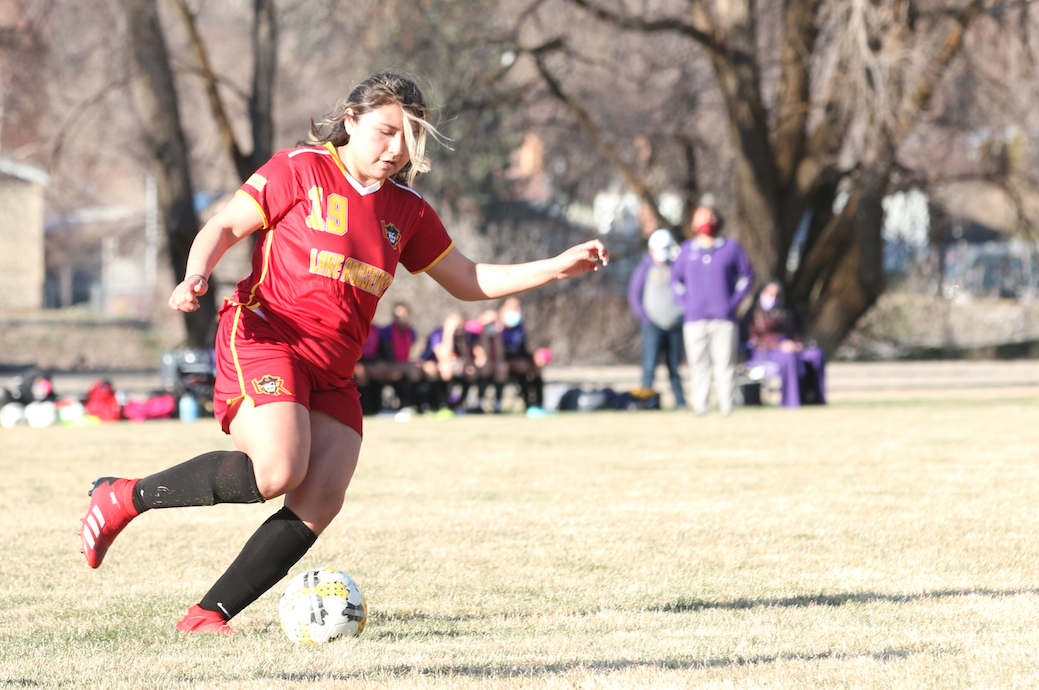 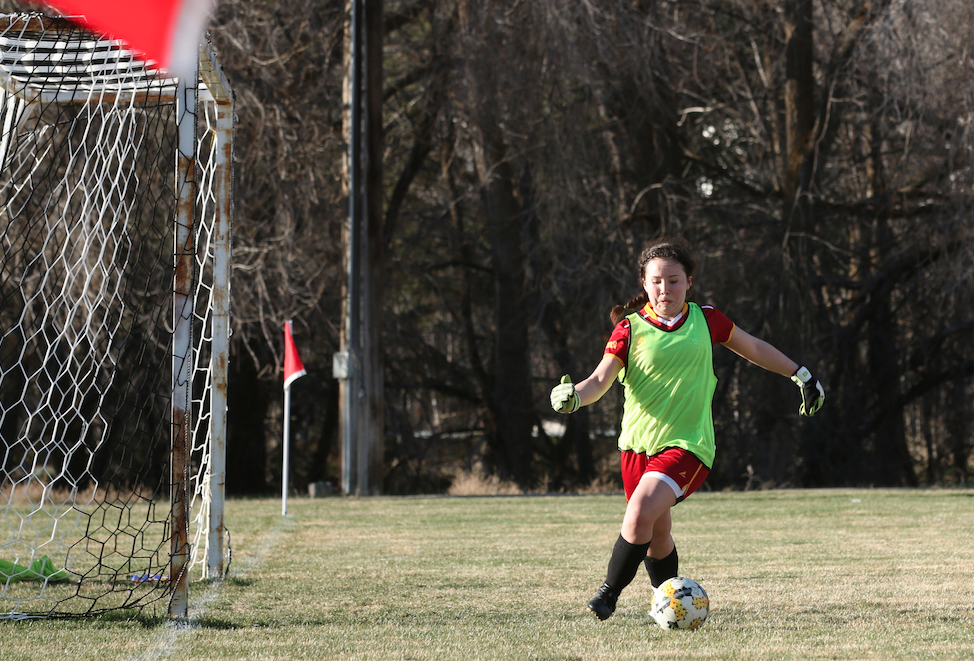 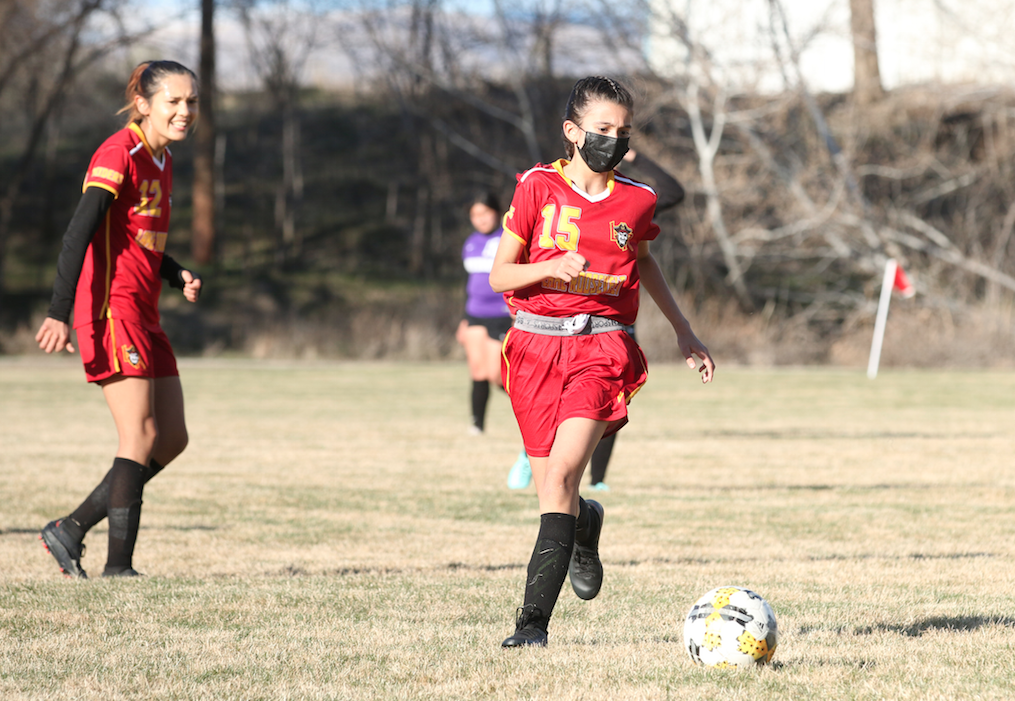 GRAND COULEE – The strategy for the Lake Roosevelt High School girls soccer team was to get ahead and hold one, and they did just that: Scoring their first goal minutes into the match, the Raider’s were eventually able to hold off Pateros for a 6-3 win, March 25.

In her final home game, Kyona Edmo (Colville tribal member), forward for the Lady Raiders, held nothing back as she finished the match with two goals and an assist against the Nannies.

On the other side, Aleeka Miller-Smith (Colville tribal member), forward for Pateros, netted home a goal in the first half and almost had another from a penalty kick but was blocked.

Lake Roosevelt’s Bryn Chaffee scored the opening goal five minutes into the match to give the Lady Raiders an early 1-0 lead.

Seven minutes later, Lake Roosevelt’s Blossom Armstrong chipped in a goal at the 12-minute mark, giving the Lady Raiders a 2-0 lead. Edmo set up the pass that would lead to the goal.

Midway through the first half, Edmo got on the board as she netted home her first goal of the match, dribbling the ball past the outstretched arms of the Pateros goalie at the 20-minute mark to give Lake Roosevelt a 3-0 lead.

Miller-Smith took matters into her own hands as she got the ball around midfield and dribbled it all the way down into the box of Lake Roosevelt where she struck home the first goal for Pateros at the 35th minute, cutting the deficit to 3-1.

Only a few minutes later, The Lady Raiders would strike again as Armstrong would net her second goal to make it a 4-1 lead at halftime.

Five minutes into the second half, Pateros scored their second goal of the match to make it 4-2 at the 45th minute.

“We started off a little nervous, just because it’s senior night,” said Edmo.

A Lake Roosevelt handball would give Pateros a penalty kick at the 60-minute mark and chance to cut the lead down more. Miller-Smith stepped up and fired away but just missed netting home her second goal.

Edmo would give the Lady Raiders a 5-2 lead as she chipped in her second goal of the game at the 67th minute.

Just a few minutes later, Pateros would strike back, getting a goal at the 69-minute to bring them to within two goals at 5-3.

In the finals minutes, Chaffee advanced the ball all the way to the Pateros goal and had a near goal but missed, her teammate Armstrong was there to clean up the rebound and struck home her third goal of the match to give the Lady Raiders a 6-3 lead.

“These girls never cease to amaze me. They’ve faced so much adversity last season and this season. We had to have several games rescheduled or cancelled because we didn’t have the numbers,” said Merlee Liberty, assistant coach for Lake Roosevelt. “I’m very grateful that we got enough girls out here to have a season.”

Lake Roosevelt finished the season with three wins, three loses and one draw (3-3-1). In their final match, the Lady Raiders lost to Royal City 3-1 on March 30.

The Lady Raiders say goodbye to three seniors in Bryn Chafee, Blossom Armstrong and Kyona Edmo but bring back most of their team, which could be the youngest team in the league.

“I have four eighth graders on the team this year that are playing the whole game,” said Liberty. “Some of my girls playing this year, have virtually no-prior soccer experience so to see the growth they’ve made, I’ am so proud.“