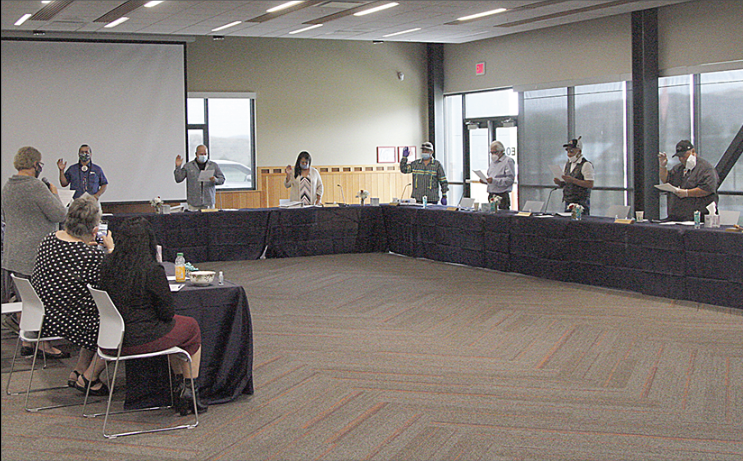 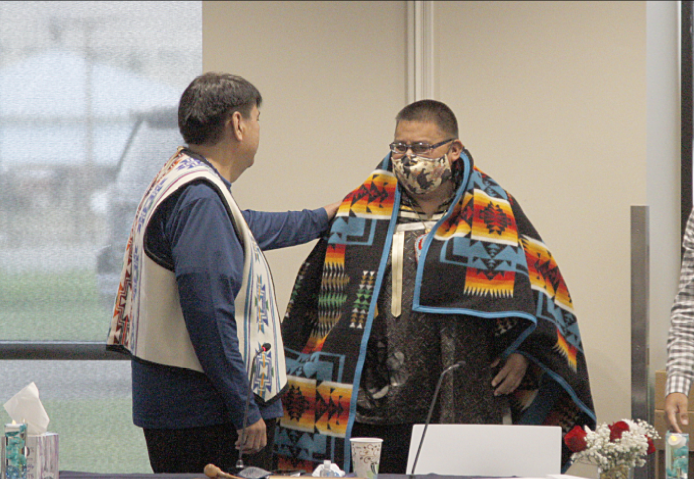 NESPELEM - With the Lucy F. Covington Government Center closed down due to the COVID-19 pandemic, the Colville Business Council concluded the 2020 CBC Elections with the oath of office, July 9, swearing in four new candidates and three incumbent candidates elected by the tribal membership.

“We are in very troubled times, very unprecedented times,” said Colville Business Council Chair Rodney Cawston. “Since the declaration of the pandemic, as a council, we’ve talked with the Center for Disease Control, as well as I.H.S., and we’ve been reviewing the World Health Organization guidelines of how to deal with this pandemic. We’ve sat in on many webinars and conference calls since all this began. We’ve looked, studied, and engaged in many meetings, including for today, about how we would proceed. It was advised to us to have the minimum here today for this swearing in, but it is in our constitution that we have to have a regular session on the second Thursday of July... We’ve done well with this pandemic. It is after this holiday weekend that we are sort of spiking, getting more cases. We are doing everything we can to stop or slow down this pandemic as much as we possibly can here on the Colville Reservation.”

Cawston further noted CBC plans to hold a celebration for the incoming council members at a later date.

“We ask for your prays and your patience, because there have been so many things we’ve had to deal with over these last several months,” said Cawston.

The Colville Tribes first announced a partial government shutdown, March 19, and announced the temporary closure of the government center, July 6.

The event was held in the auditorium, with at least 6 feet between each attendee. Sanitation stations were set up and only a handful of employees were asked to attend.

Outgoing CBC member Darnell Sam was presented with a Pendleton blanket and thanked for his time in office.

“It’s been a tough job,” said Sam. “It’s been a self-gratifying job. The thing we do, the tribal politics is one thing, but the litigation work, the legislative work, there is where it is at. It’s been my pleasure and my drive to work at holding everybody accountable to their trust responsibilities or their fiduciary responsibilities of what our elders were fighting for. I said it yesterday and I’ll say it again, we’ve been handed a baton by our elders and our ancestors to continue on the work they gave to us and shown to us to be here today.”

Committee chair appointments were as follows: