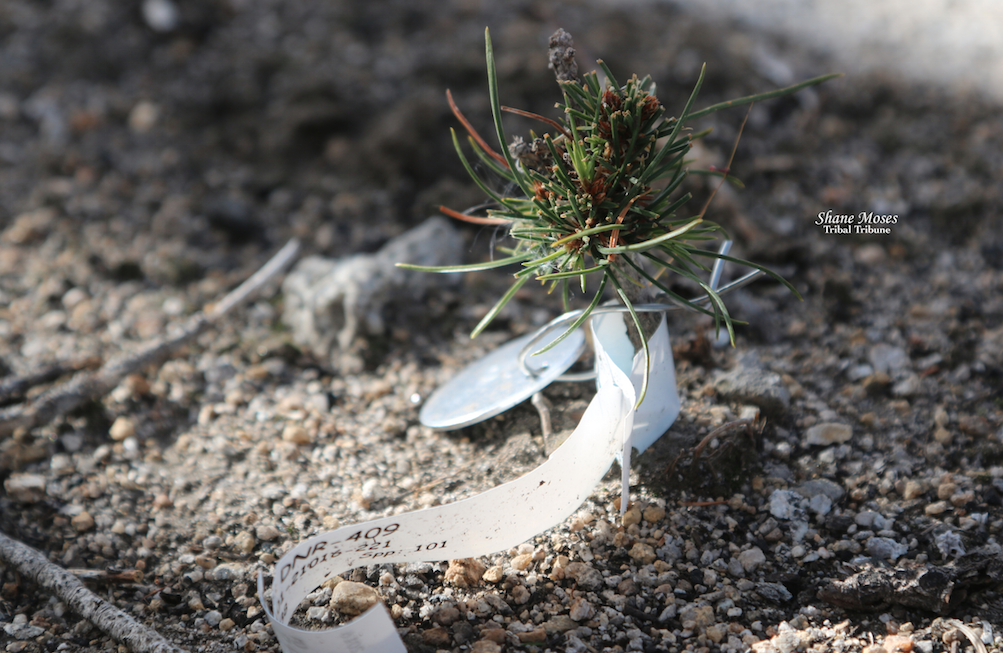 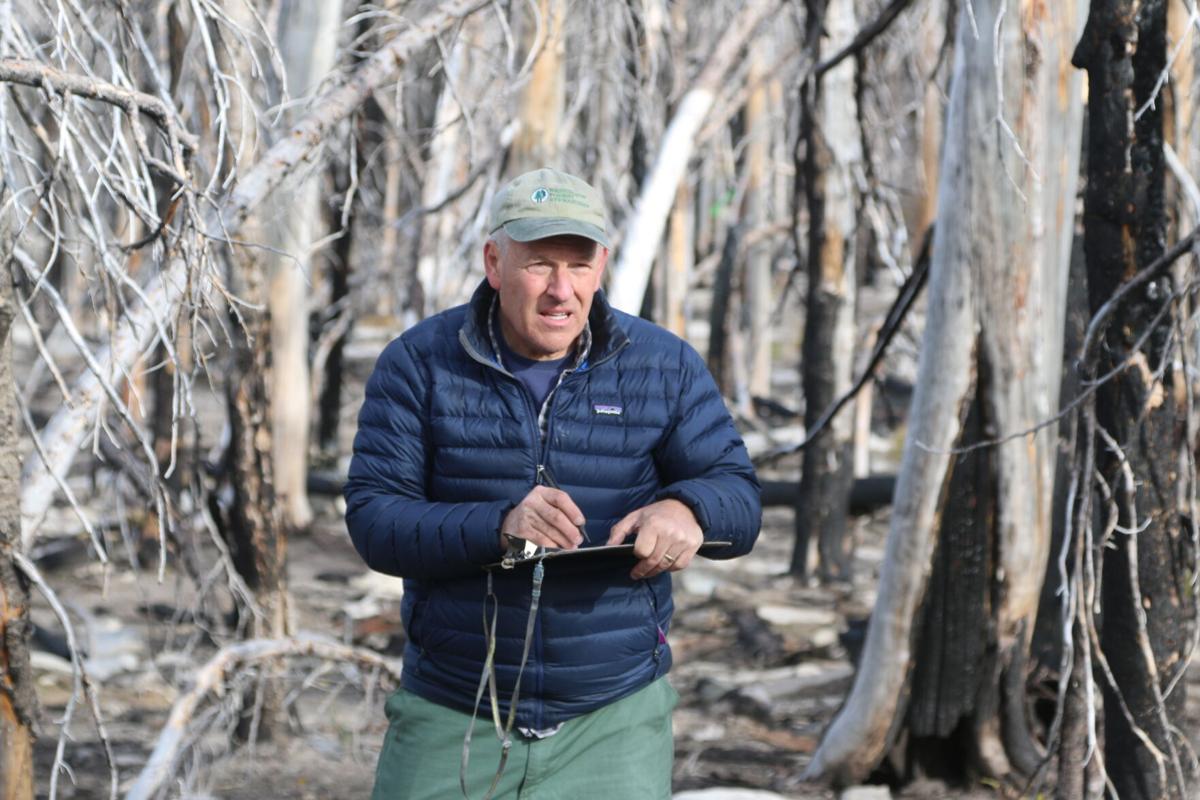 Daniel Omdal, a Forest Pathologist for the Forest Health and Resiliency Division of the Washington Department of Natural Resources takes notes and re-tags certain whitebark pine that was planted, checking on the survival of the trees growing on the top of Moses Mountain on Tuesday (Oct. 8). 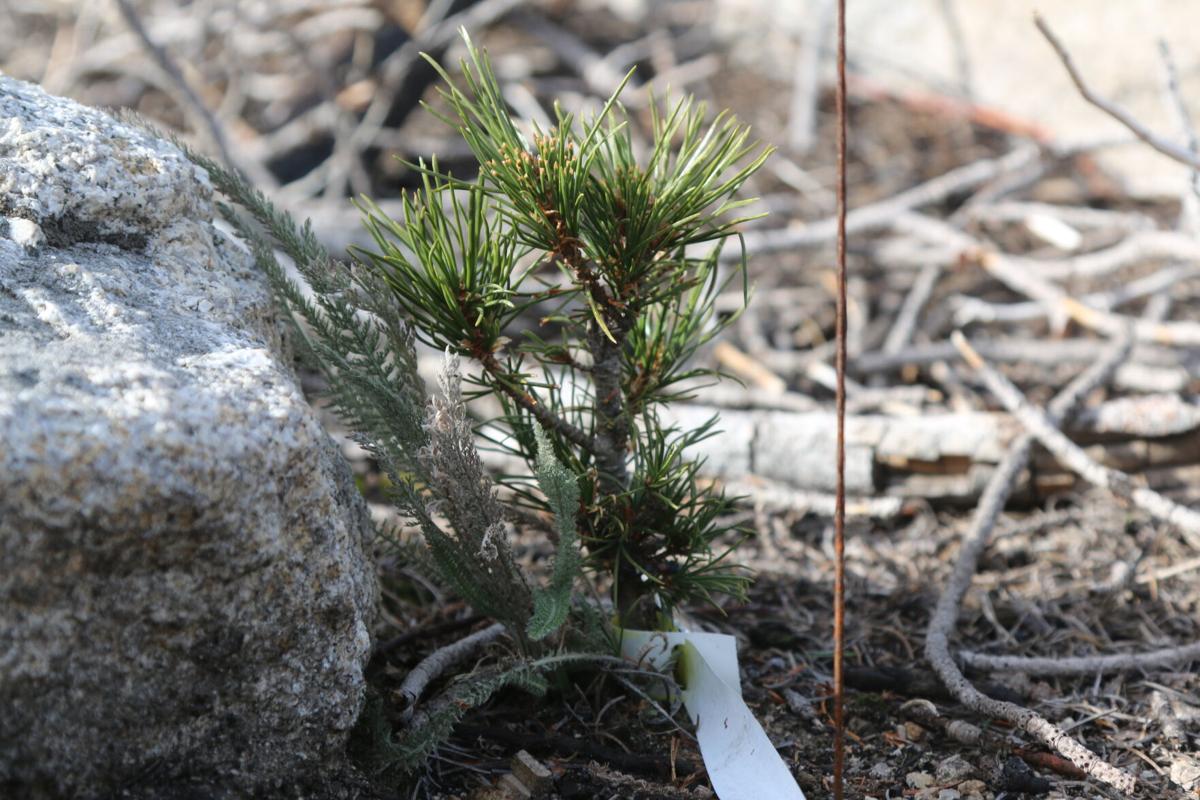 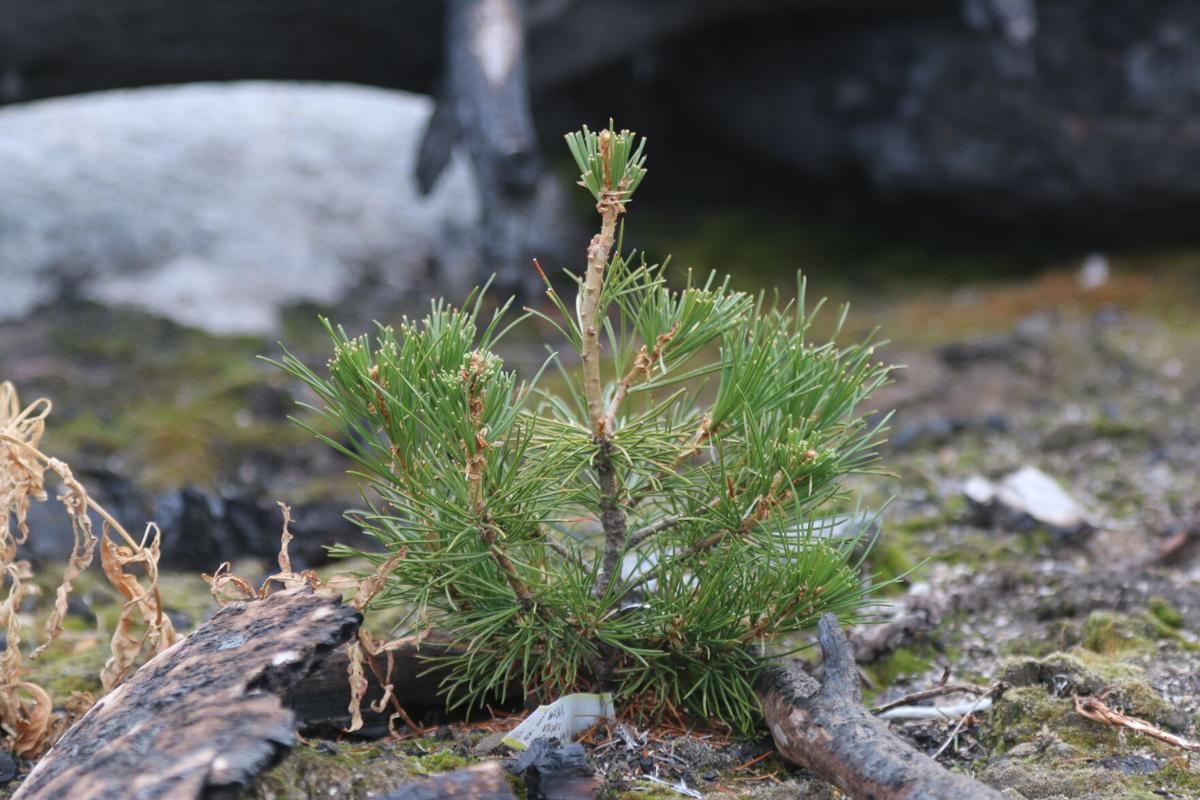 Daniel Omdal, a Forest Pathologist for the Forest Health and Resiliency Division of the Washington Department of Natural Resources takes notes and re-tags certain whitebark pine that was planted, checking on the survival of the trees growing on the top of Moses Mountain on Tuesday (Oct. 8).

MOSES MOUNTAIN - Colville Tribal Forestry Department, along with the BIA, successfully planted around 37,600 whitebark pine seedlings over a 200-acre area atop Moses Mountain this fall.

This accomplishment was the culmination of an eight-year process of collecting the seed from mature whitebark pine on the mountain in 2013 & 2018, growing the seedlings for two years and then finally planting them this fall.

The only population of whitebark pine on the Colville Reservation occurs at the very peak of Moses Mountain. The nearest other whitebark pine stand is 80 miles to the north on Mt. Bonaparte.  It is anyone’s guess how this exclusive species came to be on top of Moses. Genetic testing done seems to indicate that the Moses Mountain stand is unique to any other population in the world.

Whitebark pine is a wide-ranging species and found at higher elevations across the Rocky Mountains of Alberta, British Columbia, Montana, Idaho and Wyoming and in the Cascade Mountains of Washington and Oregon.

Excessive mortality of whitebark pine populations have occurred across the range over the last century. The species decline is caused by several factors, including a fungal disease brought into western North America in the early 1900s on infected seedlings called white pine blister rust.

Whitebark pine also faces the threats of native bark beetles, climate change, and loss to severe wildfires.  Due to these losses, and the future looking unwelcoming for whitebark pine populations that occur in a narrow band of high elevations, the U. S. Fish and Wildlife Service proposed the listing of whitebark pine as a threatened species under the Endangered Species Act of 1973 in December 2020.

The unique population up on Moses Mountain is no exception to mortality caused by white pine blister rust and severe wildfire. High mortality of mature, seed producing whitebark pines across the stand occurred from the Northstar Fire in 2015, making it even more important to replant whitebark pine.

Seed from Moses whitebark pine was collected and sent to Dorena Genetic Resource Center, a U.S. Forest Service center for genetics and plant disease testing, located near Eugene, Oregon, where they grow the seedlings and infect them under controlled conditions in order to determine the levels of natural genetic resistance to white pine blister rust.

Collecting seed from whitebark pine, testing seedlings for natural resistance to white pine blister rust and outplanting the best seedlings are currently the most practiced strategies to conserve whitebark pine in the face of an introduced disease, severe wildfires, and climate change.

The top of Moses Mountain is designated a Natural Area and no timber harvest activities occur within this Natural Area.  Whitebark pine is not considered a desired species to be harvested regardless of its location or population status, but it does fill a significant ecological niche and most likely was used historically by local Tribes.

Whitebark pine is considered a ‘keystone’ species and an essential part of high elevation forests where it occurs. In addition to retaining snowpack and providing species diversity, many animals rely on the large, nutritious seeds it produces.

The Clark’s nutcracker, an intelligent bird in the same family as the crow and magpie, main food source is whitebark pine seeds.  The nutcracker caches seeds in numerous locations and has an amazing memory to revisit these caches and retrieve seeds.  Inevitably though, some cached seeds are lost or not consumed and this aids in the regeneration of the stand.

Historically, grizzly bears were known to target whitebark pine trees with ripening cones as an excellent food source to help them fatten up for winter hibernation.  Black bears use this seed source for the same function to this day.  A large black bear was seen foraging on whitebark pine seed this past August by Forestry personnel atop Moses.  Many other birds and small mammals consume the seeds to a lesser degree as well.

This 200-acre planting area of over 37,000 whitebark pine seedlings on Moses Mountain covers about half of the total area we are interested in planting.  Once enough onsite seed is collected, this process will be completed over the northern portion of Moses at roughly the same size of area and elevation.

Many people had a hand in the planning, development and implementation process of this project.  A narrow window for planting was available that allowed for adequate moisture, but before frozen ground and snow made planting impossible.

The final implantation phase was faced with a very challenging site due to morning frozen ground, and steep rocky slopes.   Funding for the Project came from three main sources; (1) A grant from U.S. Department of Agriculture (USDA) Forest Health Protection Program, (2) Burned Area Emergency Response (BAER) Funding and (3) local Tribal Funding.  My hat is off to all involved.