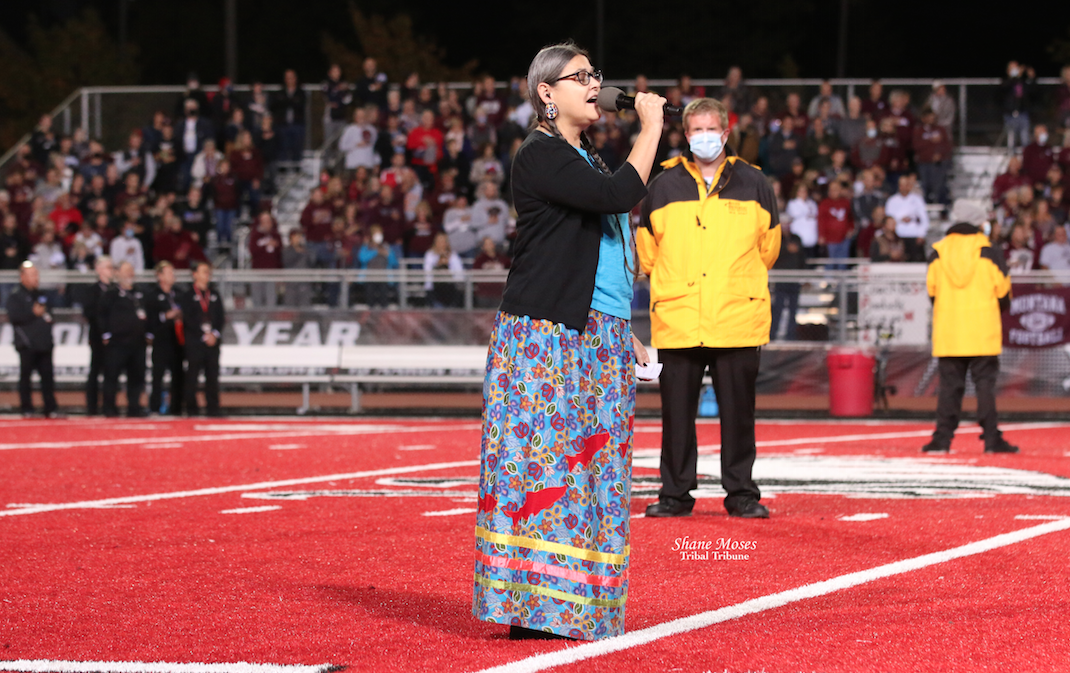 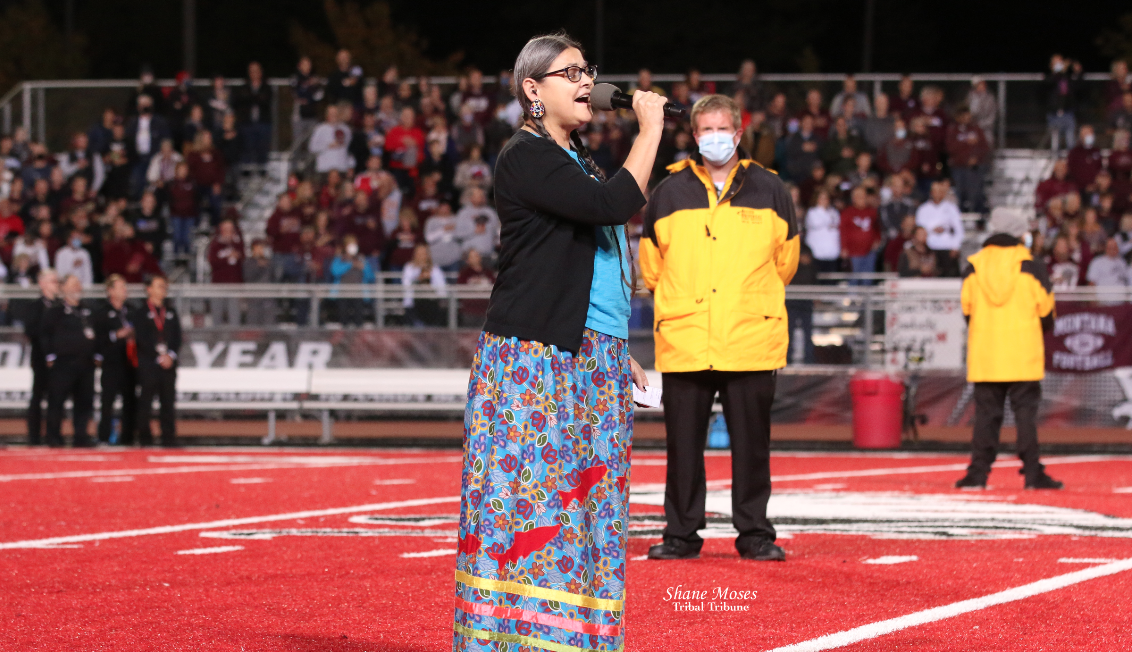 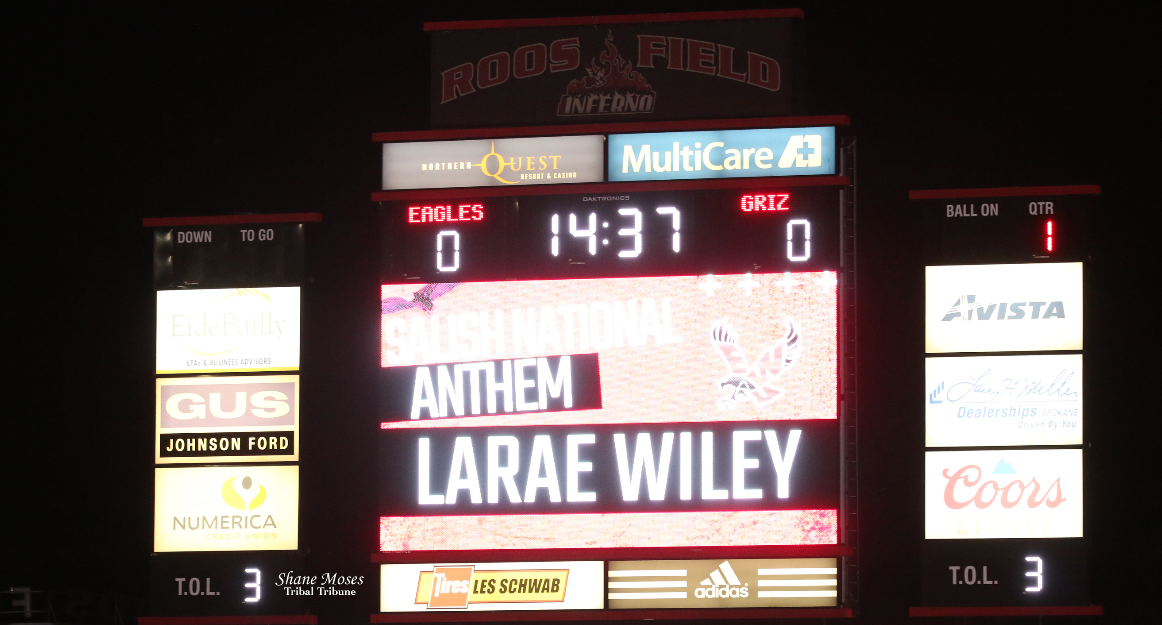 CHENEY – Just minutes before Eastern Washington University and the University of Montana were set to kick off in arguably the biggest game of the year for both schools, the singing of the National Anthem was set to take place.

Now, this is nothing new, before every home or away game the National Anthem is always played or performed. However, this time would be slightly different.

In front of a sold-out crowd of 7,944 fans, Colville tribal member LaRae Wiley would have the honor of singing the National Anthem, the only difference for this particular occasion?

She would be singing in her native Salish Language.

With energy and excitement all over the stadium, Wiley made her way towards the middle of the field, and within a few seconds, the crowd then turned on the silent button.

She began singing in Salish and within a few minutes, the song was over with the crowd letting out a big roar of cheers.

“The excitement of the crowd was amazing,” said Wiley. “I could definitely feel the anticipation and energy.“

Being able to sing in front of thousands, priceless.

“For me, singing the national anthem at sporting events is an opportunity to share our beautiful language with people,” says Wiley. “I feel proud that I was able to bring something special by singing the National Anthem in Salish.”

“I am an EWU alumnus and grew up in Cheney, so it felt like being home,” she said. “

Wiley who is the executive director at the Salish School of Spokane is a teacher at heart.

“It’s an opportunity to educate people too,” says Wiley. “Most people don’t know about our language, how endangered it is, or that it even exists.”

“For me, Ms. Wiley singing the National Anthem in Salish is a powerful declaration that we are still here, living among the non-Native communities,” said Erin Ross, director of Tribal Relations for Eastern Washington University.

“Her beautiful voice draws people in and it felt like a prayer – a prayer in which we still desire true freedom for all inhabitants.”

Of course, situations like this don’t just happen randomly out of the blue.

“Erin Ross, the Director of Tribal Relations at EWU reached out to me to see if I would be willing to sing at the game,” Wiley said.

“I was asked to assist in finding artists who would be willing to share their talents with our audience for Native American Heritage Day,” said Ross. “Our athletic team remembered that Ms. Wiley had graciously sung for our football games in the past. I reached out and without hesitation, she said “Yes.”

Leading up to the game, Wiley went through her usual routine.

As the game drew closer and closer, nerves started to sink in.

“I was very nervous. I get nervous every time I perform,” says Wiley. “I did some positive self-talk, said a prayer, and took some deep breaths.”

After it was all said and done, Wiley expressed how she was extremely happy with how it all turned out.

For Wiley and Ross, this was a great opportunity and platform to spread more cultural awareness about Native American/Indigenous culture and traditions.

“Sharing our traditions pulls people in and raises our visibility on campus, which in turn, raises awareness of our issues such as Missing and Murdered Indigenous Women,” said Ross. “We are not the sum-total of what people have seen on T.V. or movies – caricatures of what non-Native people think we should look like, talk like, and dress like. We are finding avenues through which to maintain our values and traditions while learning how to thrive in a world and within systems that are not designed for us.”

The game was televised nationally on ESPN2, a first for any football team in the Big Sky Conference and for both EWU and Montana. Eastern Washington went on to hold off Montana for a 34-28 win on Oct. 2.