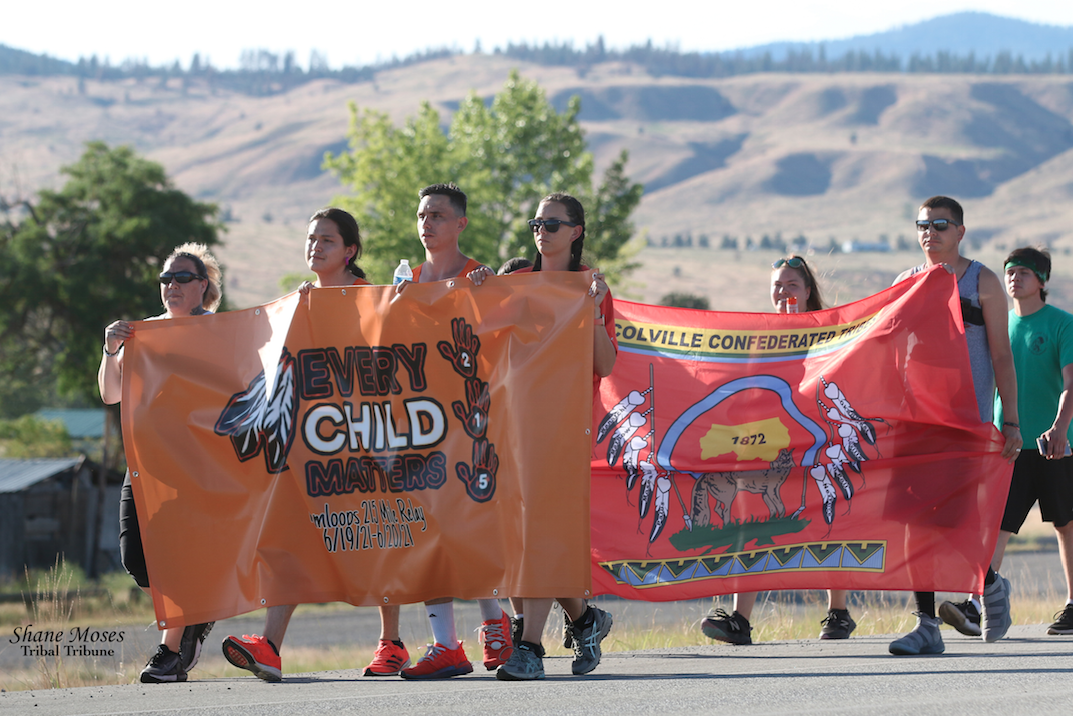 FROM L-R: Kim Erickson, Terrance Gallaher, Danny Brigman and BreAnn Brigman all carry the sign, “Every Child Matters” as they finish the last stretch of the 215-mile relay, making their way up Highway 155, June 20. Behind them are, Noel Flavell, Jarred-Michael Erickson and Kyle Abrahamson 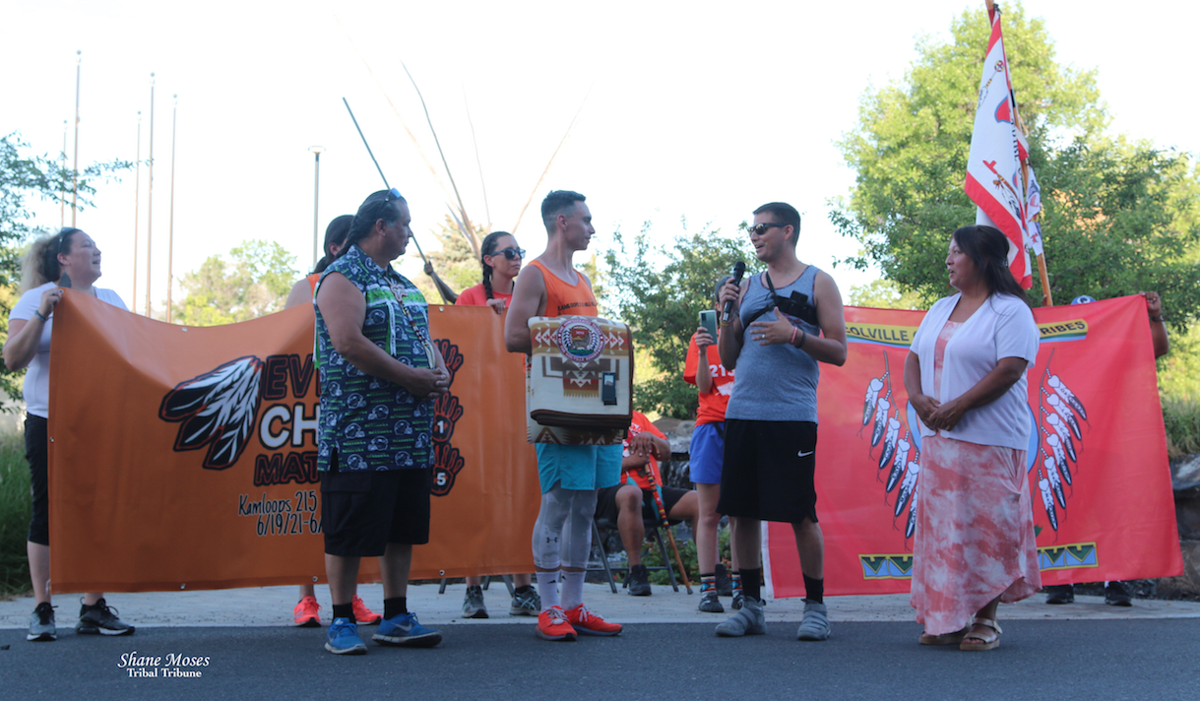 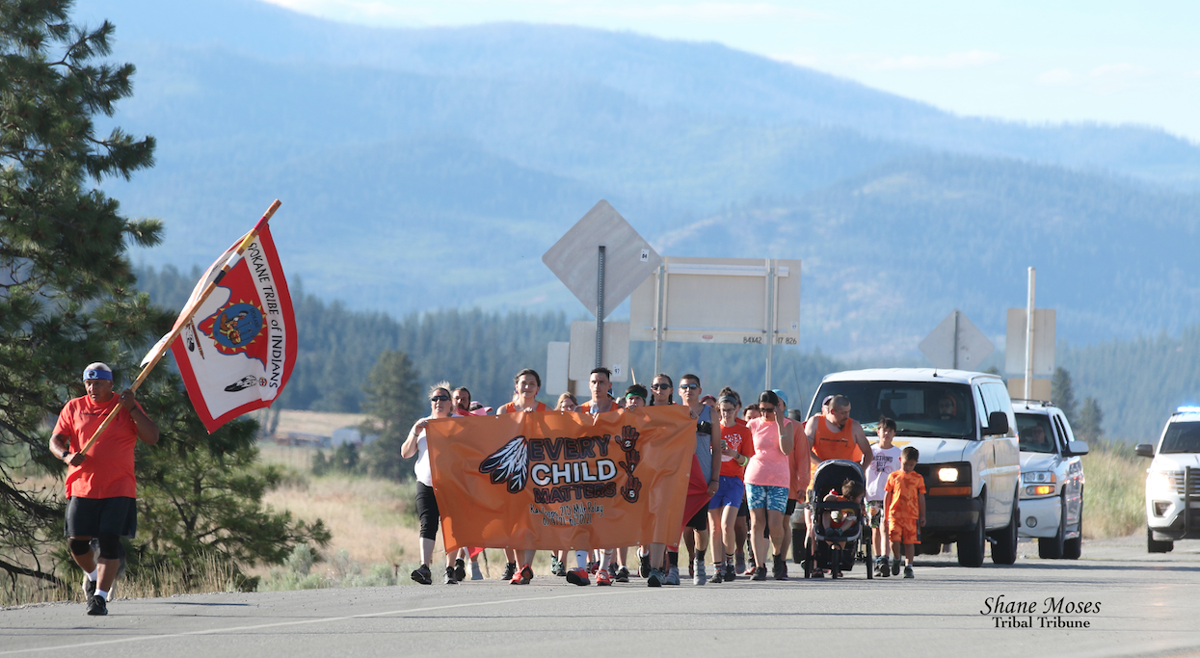 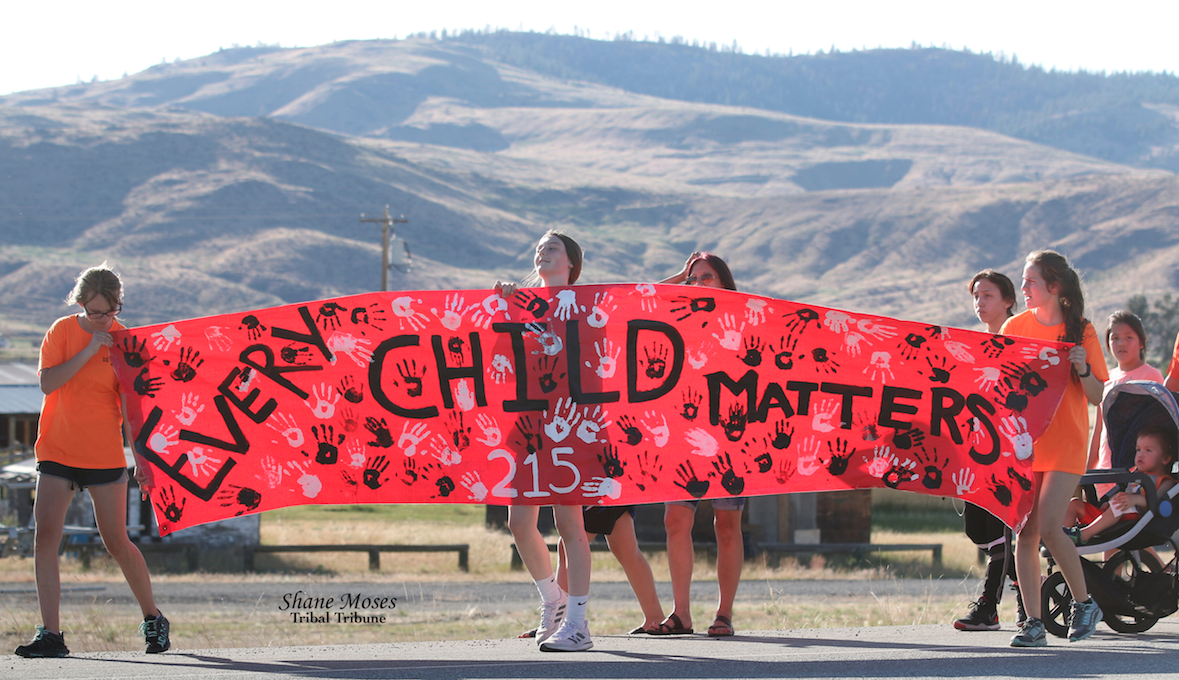 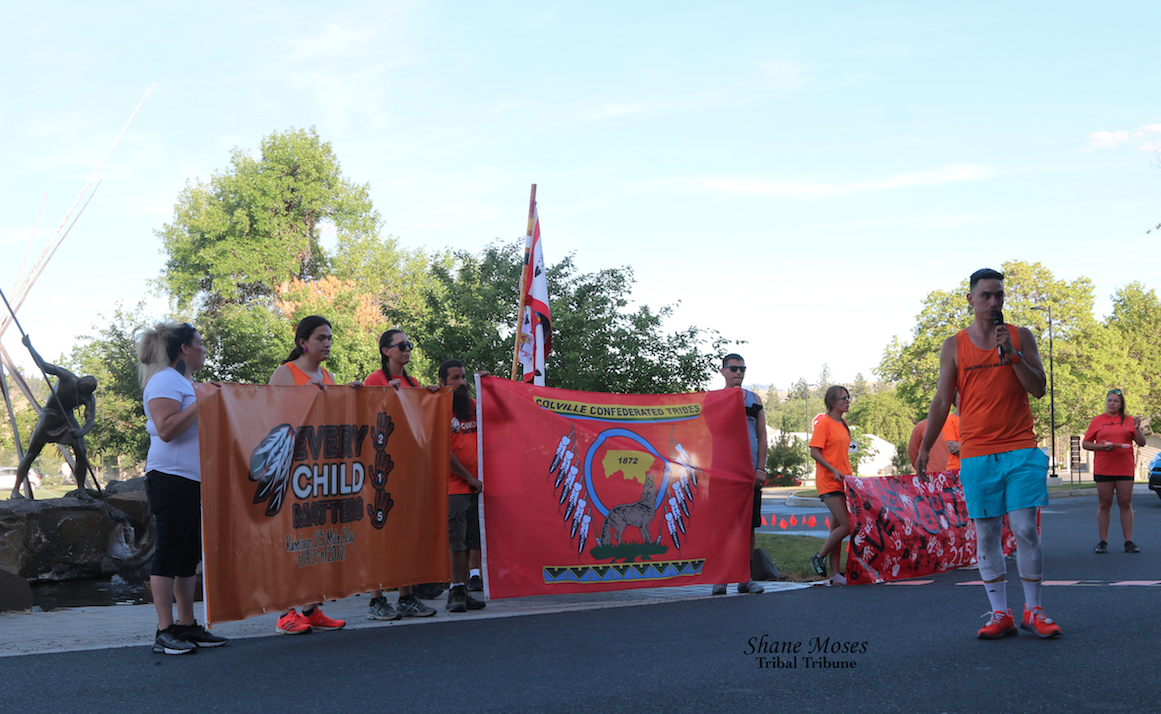 FROM L-R: Kim Erickson, Terrance Gallaher, Danny Brigman and BreAnn Brigman all carry the sign, “Every Child Matters” as they finish the last stretch of the 215-mile relay, making their way up Highway 155, June 20. Behind them are, Noel Flavell, Jarred-Michael Erickson and Kyle Abrahamson

NESPELEM –When it was announced that the remains of 215 Indigenous children had been found on the grounds of a Kamloops Indian Residential School, it made national headlines.

The news was something hauntingly unsurprising in Indian Country: A horrific uncovering of hundreds of unmarked graves of children ripped from their families. Children that were forced to go into the boarding school system never to return again.

Danny Brigman, a member of the Spokane Tribe, wanted to honor and bring awareness to the children found in the mass burial at a Kamloops Residential School, an issue that hits him personally.

“Part of why I wanted to try and do something for this, it really hit close to home for me with my Grandma Alvina Flett going to boarding schools,” he said. “Specifically her older sister Virginia and her father Joseph, they went do a residential school in Kamloops.”

Brigman took it upon himself to honor the 215 Indigenous children whose lives were taken from them.

With the help of others, Brigman organized a 215-mile relay that started in his hometown of Wellpinit and came to an end at the Colville Indian Agency’s government center June 20.

The 215-mile relay started on June 19 with every mile representing a child recently found at the Kamloops boarding school.

“Words can’t express my gratitude,” Brigman said. “I just want to thank every single person so much for making this happen. It wasn’t just me. There was an army of people, working and tackling different tasks jumping in and helping. I really appreciate it.”

Brigman put in 40 miles over some grueling stretches and by Sunday evening was walking slowly with stiff legs as he spoke about what it was like first trying to get this all set up and the experience once it had taken place.

“This is one step to get that awareness out there and help,” Brigman said. “Thank you everybody for being here and wanting to be apart of it and wanting to make this happen.”

“We’ve been overwhelmed with the donations. We have a good chunk of money to donate up to Kamloops that they will use to further investigate or dedicate a memorial for the children.”

This relay also united many people from different tribal nations and backgrounds across the western United States.

A group of three girls from Curlew High School sporting orange shirts took part in the relay as they tackled a stretch of Highway 155 outside of Nespelem to the Agency.

Orange is the way to honor and to help spread awareness for children who attended residential schools. The orange shirt symbolizes these children having their identities stripped away.

“I’m so appreciative and this is really bringing awareness,” said Brigman.

The Colville Confederated Tribes Police Department stepped in and gave the relay runners an escort to ease and slow the traffic on Highway 155.

Brigman expressed that certain spots during his run from Tonasket to Omak got very worrying at times as they had no police escort at that particular stretch.

With cars and semi trucks flying down the road and not really slowing down at all as they passed Brigman jogging in front of their van, he expressed that they had to stop a few times out of caution.

Brigman was able to get that stretch of road completed and was able to carry out the mission at hand and finish.

“It really helped out with the canoe journey jumping in a tackling Sherman pass so I didn’t have too,” Brigman said laughing.

“Thank you Danny Brigman for putting this together in such a short time period and for putting in 40 miles yourself,” said Jarred Erickson, Colville Business Councilman from Nespelem District who took part in the relay as well. “It was great to see all the people turn out and runners from all different walks of life.”

Some out there can relate to what to what it was like going to a boarding or residential school.

For Colville Business Councilman Andy Joseph, he remembers what it was like for him as a young child.

“When I was a young boy and going to St. Mary’s Mission, I used to sneak out at night and sing our elders winter dance song,” Joseph said. “I wanted to be home during the ceremonies. When I went down to boarding school in Utah, I used to do the same thing. Always wanting to be home. It was a really hard time. It’s like opening a wound.”

Joesph, Erickson and Colville Business Councilwomen Sharlene Zacherle presented Brigman with a Pendleton blanket at the end of his journey.

“On behalf of the Colville Confederated Tribes we really want to thank you for having this on your heart and in your mind,” said Joseph “I’m proud of each and every one of you, your all leaders in my eyes and heart, I just wanted to say thank you.”

“Thank you from the bottom of my heart for everybody that participated. I’m very honored that you guys ended your 215-mile journey here,” said Zacherle,