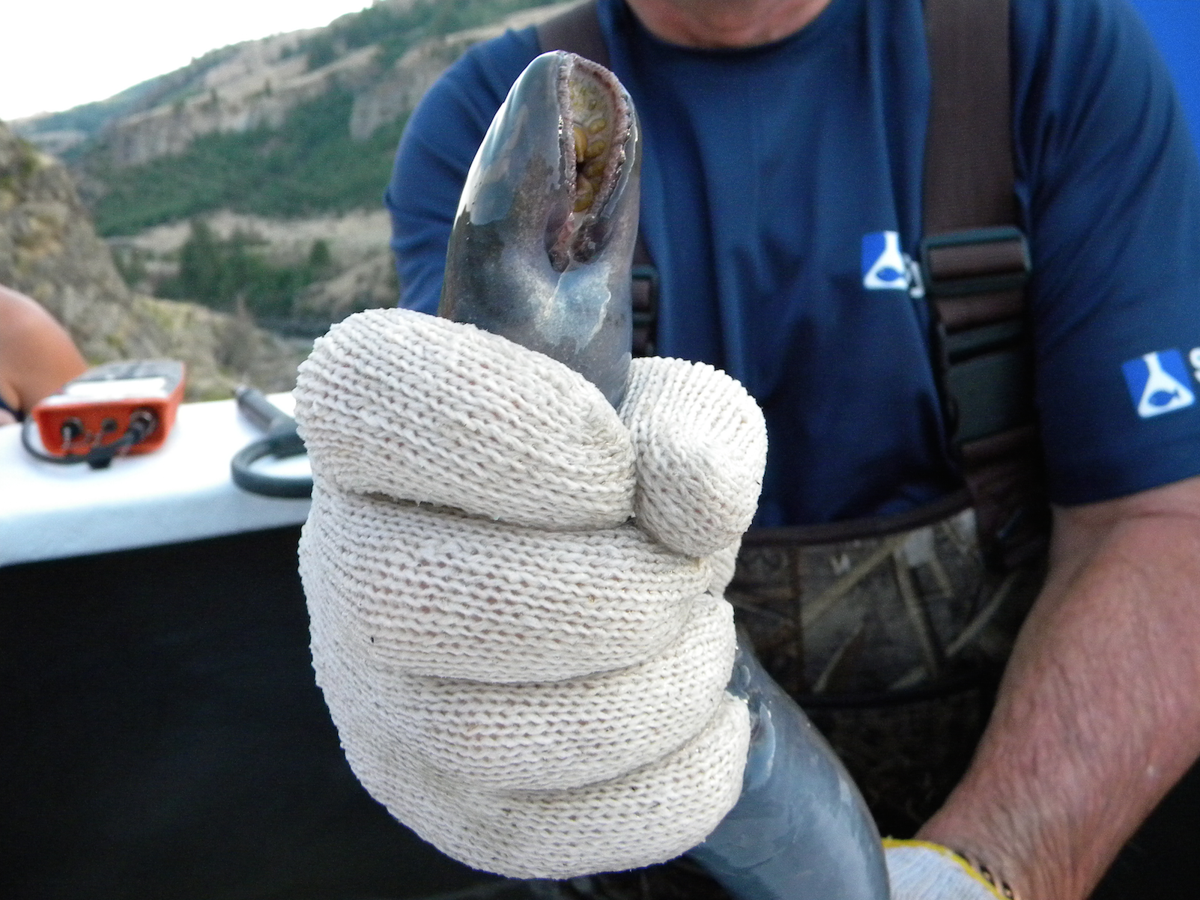 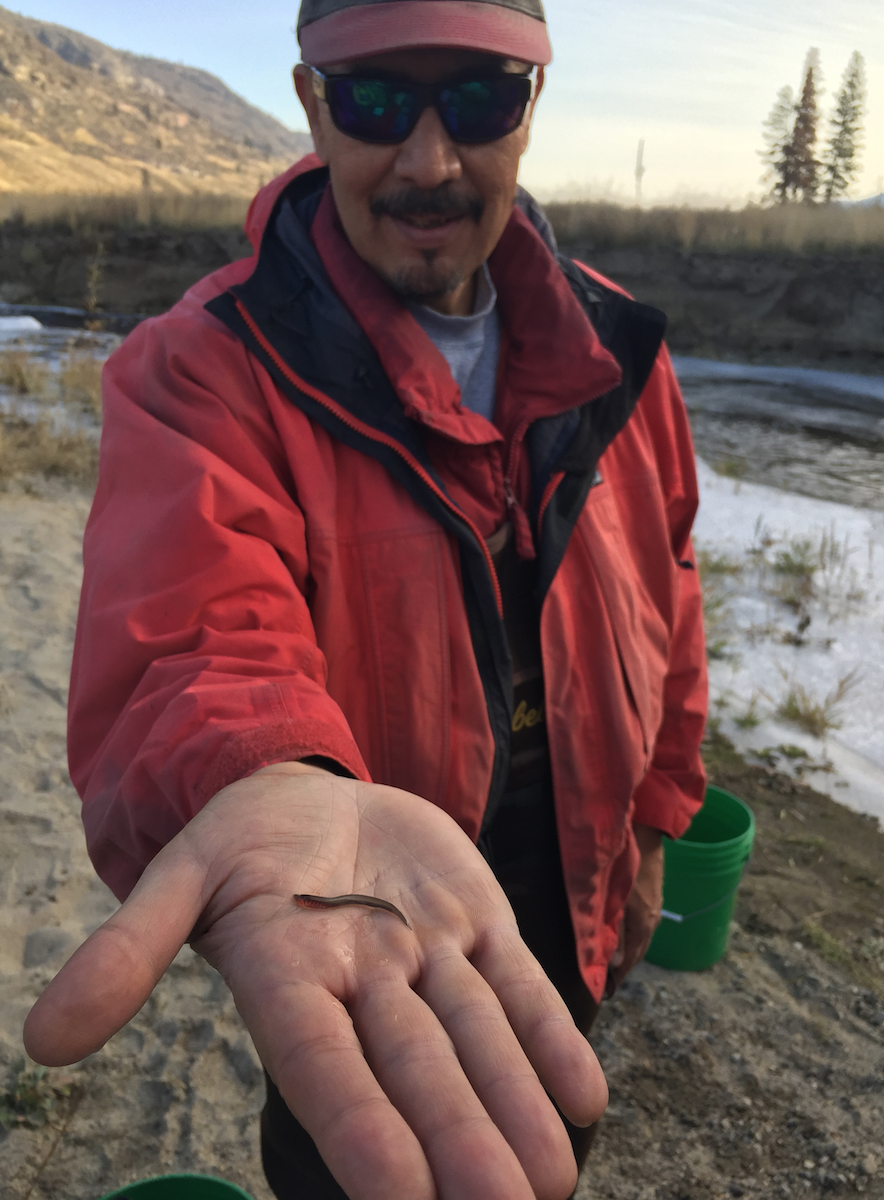 NESPELEM –   Fisheries managers have been working to restore Pacific lamprey in the Okanogan River basin since 2017. This year, two generations of larval lamprey have been sampled in multiple tributary streams proving those efforts are working.

“Since the fall of 2019, the Okanogan Basin Monitoring and Evaluation Program (OBMEP) crew started to see larval lamprey while they were electrofishing for steelhead in both Salmon Creek and Omak Creek,” said Matt Young, fish biologist for the Colville Confederated Tribes (CCT).  “We coordinated with biologists from the U.S. Fish and Wildlife to spend a day electrofishing in both streams to collect DNA samples from larval lamprey to better understand their parentage.  In 2019, larval lamprey would have been 1-year old and averaged 35 mm in length.  In the fall of 2020, OBMEP crews sampled that same generation of lamprey as 2-year old’s and they are noticeably larger averaging 105 mm in length.  Larval lampreys have also been reported in the Similkameen River.”

“We have been monitoring 266 Pacific lamprey that were PIT tagged and released above Wells Dam in the fall of 2020 and as of October 21, 18 lamprey have been detected at the PIT tag antenna in the Okanogan River near Malott, Washington,” said Young.  “While fish are still migrating, this is the highest number of Pacific lamprey migrating into the Okanogan River basin we’ve ever detected. There is still a long road ahead to restore lamprey in the upper Columbia, but these early trends are showing positive results.”

The adult Pacific lamprey that the CCT fisheries staff receives are captured by the Yakama Nations and Douglas County Public Utility District staff at downriver dams on the Columbia River such as John Day and Priest Rapids.

“Douglas PUD funded lamprey trapping at Priest Rapids Dam, transported the fish to Wells Fish Hatchery and PIT tagged them there, and then handed off a portion of the tagged lamprey to CCT staff to be transported to and released in tributaries in the Okanogan River Basin,” said Chas Kyger, Aquatic Resource biologist for Douglas County PUD.  “The work took place July through September this year and it’s scheduled to occur again in 2021.”

“This year, a total of 89 adult lamprey were released in Omak Creek, Salmon Creek, Loup Loup Creek, and the Similkameen River,” said Young. “These fish will hold in those streams until they spawn between March and July of next year. Similar to salmon, lamprey do not feed once they enter fresh water. They solely rely on fats stored in their body to survive the winter.”

Biologists selected release sites in areas that contain prime spawning and larval rearing habitat to provide the adults and their offspring the best chance to survive.  Since 2017, a total of 467 adult lamprey have been released in the Okanogan River basin.  “The coordination among natural resource managers, federal dam operators and Douglas and Grant PUD’s has been essential in providing the lamprey sources for translocation efforts,” said Kirk Truscott, Anadromous Fish Program manager for CCT.

Some may still wonder how are they going to get back to areas they came from to spawn when adult fish ladders and downstream juvenile bypass facilities at some of the Columbia River dams were constructed for salmon passage and not lamprey passage.  The good news is, Federal and mid-Columbia PUD dams have already undergone alterations to their fishways to improve passage for lamprey.

Lamprey are one of the oldest fish in the world appearing in fossil records about 450 million years ago. They are an ancient fish that survived ice ages. Lamprey have three eyes and they smell using a nasal pore on the tops of their heads. They have a large, jawless sucking mouth with several teeth. It uses its suction-cup mouth to attach itself to rocks or larger fish in the ocean. They spend 3-7 years in freshwater streams, filter feeding on algae, plant material and poop from insects and fish. As juveniles they leave their natal streams and swim to the ocean where they stay in the ocean for 2-3 years, then return to fresh water to spawn. Females lay about 100,000-300,000 eggs that the males fertilize and after they spawn, they die and provide nutrients and energy to the stream.