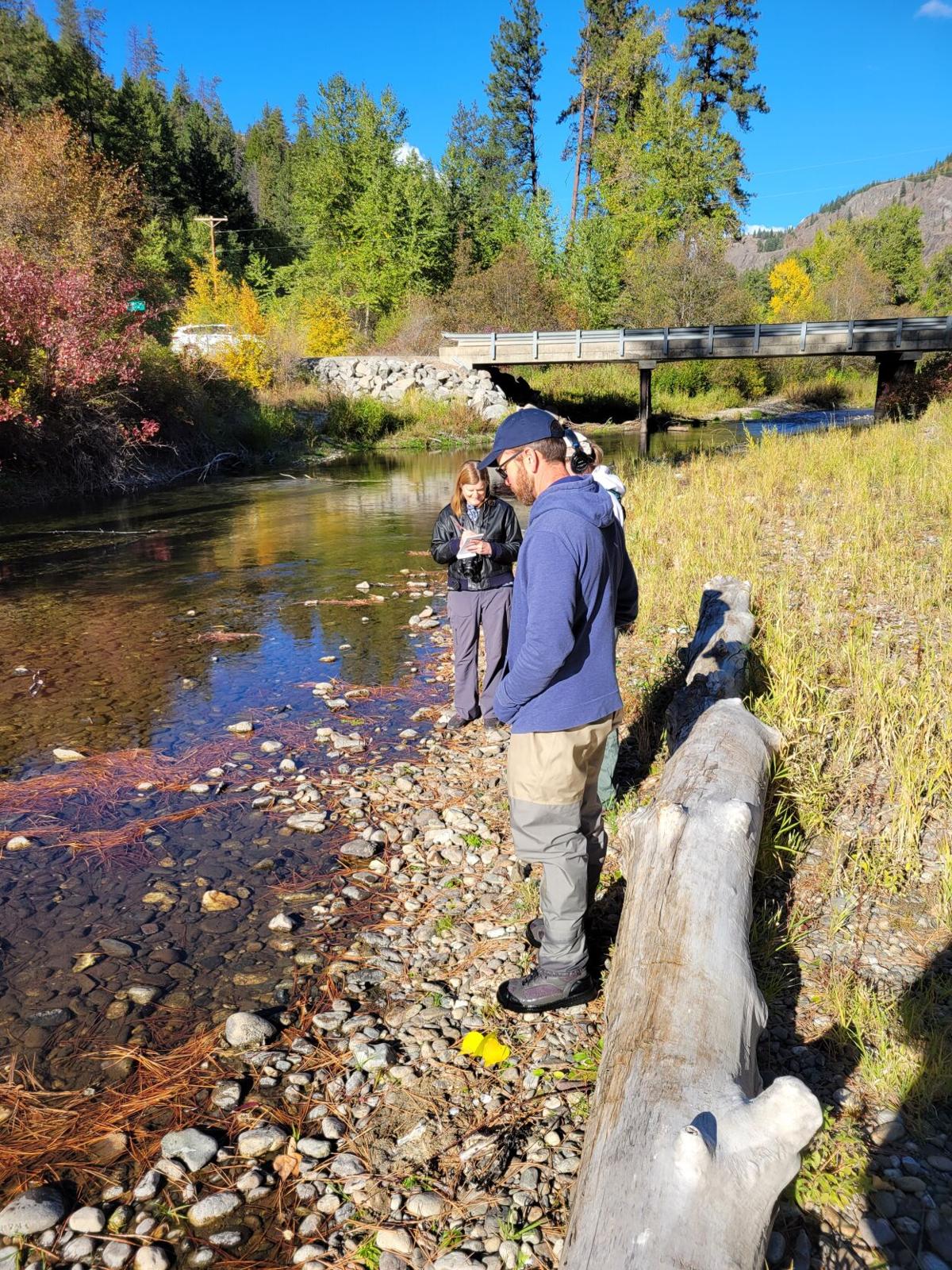 Casey Baldwin, research scientist for the Colville Confederated Tribes (CCT), and a team of biologists observe chinook salmon spawning in late October in about a 10-mile stretch of the Sanpoil River. 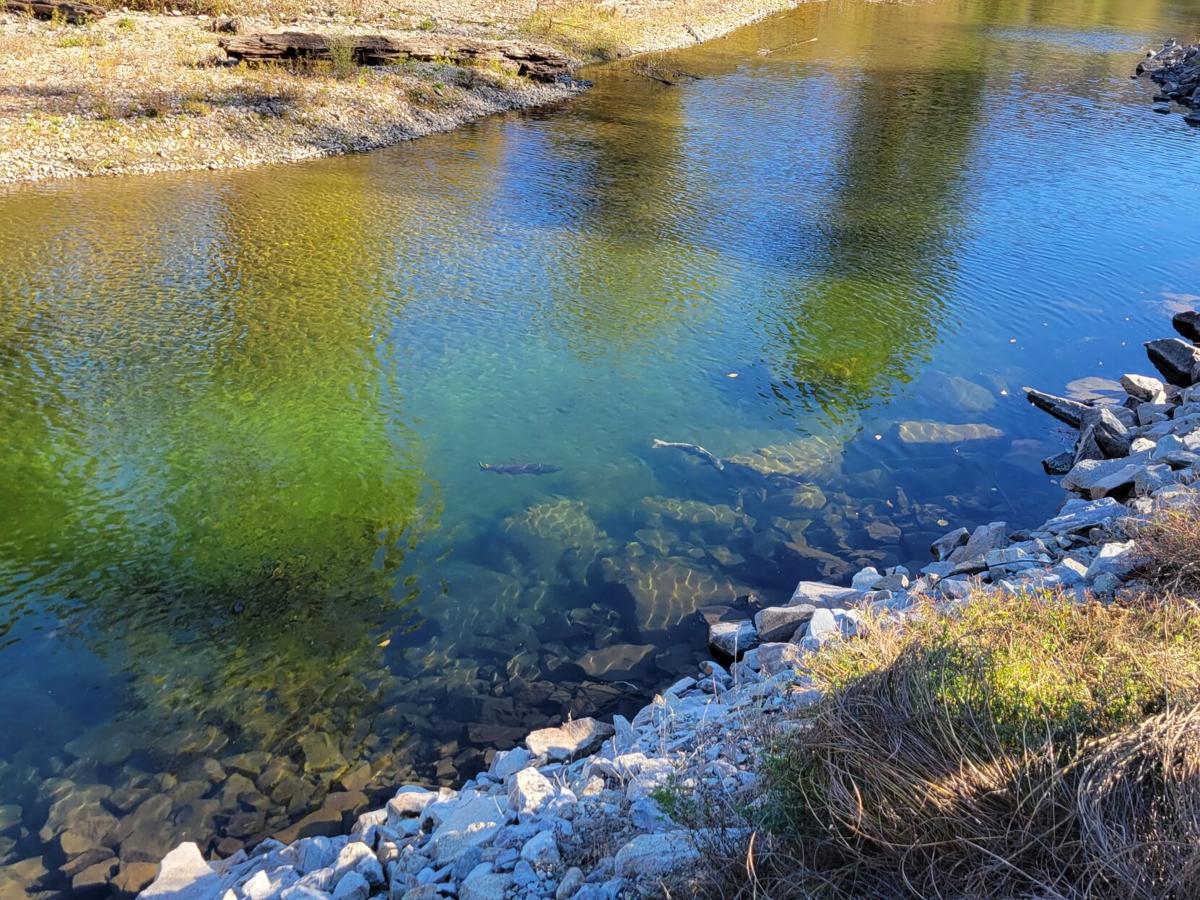 Chinook salmon spawning and swimming around in the Sanpoil River.

Casey Baldwin, research scientist for the Colville Confederated Tribes (CCT), and a team of biologists observe chinook salmon spawning in late October in about a 10-mile stretch of the Sanpoil River.

Chinook salmon spawning and swimming around in the Sanpoil River.

For the second year in a row, chinook salmon have spawned successfully in the upper reaches of the Columbia River, above Chief Joseph and Grand Coulee dams

NESPELEM - Casey Baldwin, research scientist for the Colville Confederated Tribes (CCT), and a team of biologists observed chinook salmon spawning and counted redds for several weeks. They counted 73 redds by late October in about a 10-mile stretch of the Sanpoil River.

“The spawning ground surveys demonstrated that we had another successful year of salmon spawning in the Sanpoil River,” said Baldwin.  “We increased the number released and put some of the fish in a different location than last year, and they did well in both areas.”

In August 2021, the tribe held several cultural releases, 178 adult chinook were released in the Sanpoil River, 57 in Lake Roosevelt and 107 in Lake Rufus Woods. All of the adult salmon were PIT tagged.  The releases gave traction to study the spawning activity of the salmon but there are ecological benefits as well.

Baldwin noted that they observed bald eagles feeding on the carcasses of the salmon after the fish had spawned and died. “The spawning salmon improve the health of the river in several ways, many animals such as bears, otters, birds, juvenile fish and invertebrates will feed directly on the carcasses.  The carcasses also provide nutrients to the stream which benefits aquatic productivity and riparian vegetation,” he said.

The salmon used in the releases were surplus hatchery summer chinook from the Wells Fish Hatchery. Baldwin says that Douglas PUD’s cooperation on this project is key to its success.

The adult chinook were trapped at the Wells fish hatchery ladder and were tagged and tissue sampled for genetics and disease testing by the Washington Department of Fish and Wildlife (WDFW).

“WDFW has assisted with disease testing by processing samples in their Olympia Labs and subsidizing the cost of the sample processing to reduce costs to the tribes and streamline the ability to move fish into the blocked area,” said Chris Donley, regional fish program manager for WDFW.

The CCT have been working closely with the Upper Columbia United Tribes (UCUT) and the WDFW to pursue a phased approach to reintroducing salmon in the blocked areas, upstream of Chief Joseph and Grand Coulee dams. They completed Phase 1, science and feasibility evaluations and recently completed an implementation plan for Phase 2. The second phase will include multiple studies to test feasibility and determine the most appropriate path forward for reintroducing salmon into the blocked areas. The CCT, UCUT, the Spokane Tribe of Indians, the Coeur d’ Alene Tribe and the state of Washington have funded the salmon reintroduction efforts thus far, but more funding is needed for Phase 2.

“WDFW fully supports salmon and steelhead reintroduction efforts into the Blocked Area of the Columbia River and we are eager to assist where needed with staff expertise and funding, when available,” said Donley. “We embrace the value of reintroduction both ecologically and culturally and continue to look for ways to be helpful to the Colville Tribe and our UCUT partners.”

“There are economic, ecological, and spiritual benefits,” said UCUT Executive Director DR Michel. “Reintroducing salmon in the blocked areas doesn’t just benefit the tribes, it benefits all people up and down the Columbia River.”

The CCT’s juvenile trout monitoring program counted over 1,450 salmon smolts from June 2021 until October 2021.  The trap only captured a portion of the fish that were produced in the Sanpoil River.  These fish were produced by the 100 adult salmon the tribe released in the Sanpoil in 2020. Next spring, fisheries staff will again be able to document out-migrating salmon smolts and tag them in order to document their journey to the ocean and back.

“We were excited to document that the salmon successfully produced offspring in this tributary where the dams have excluded them for over 80 years,” said Baldwin.  If the project can be ramped up to levels envisioned in the phased approach, there will be benefits throughout the Columbia River and the ocean. The upper Columbia summer chinook contribute to the ocean ecosystem and are harvested all along the Columbia and in the ocean as far away as the Gulf of Alaska.”