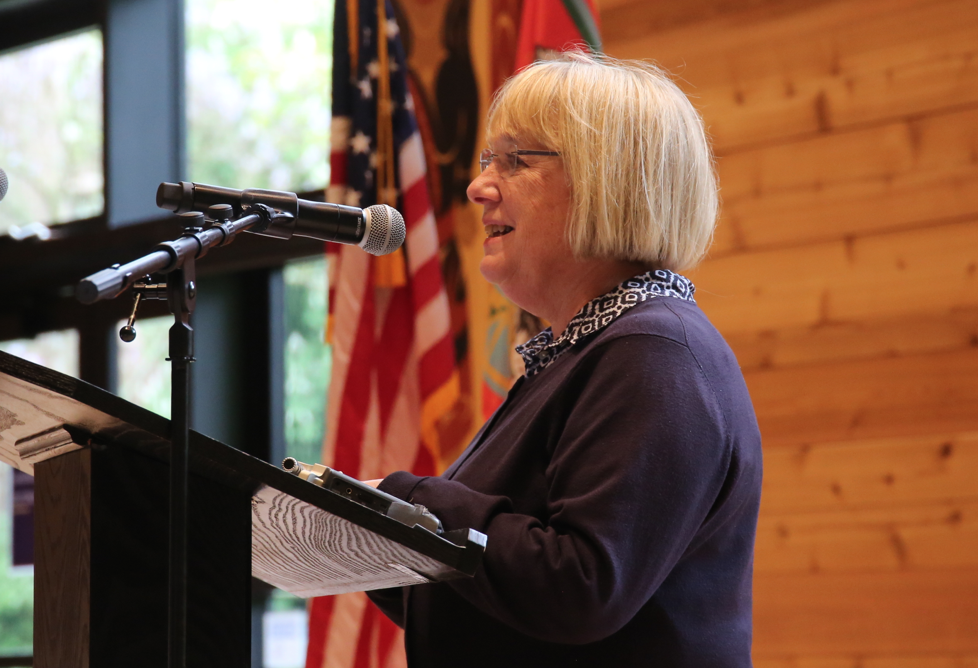 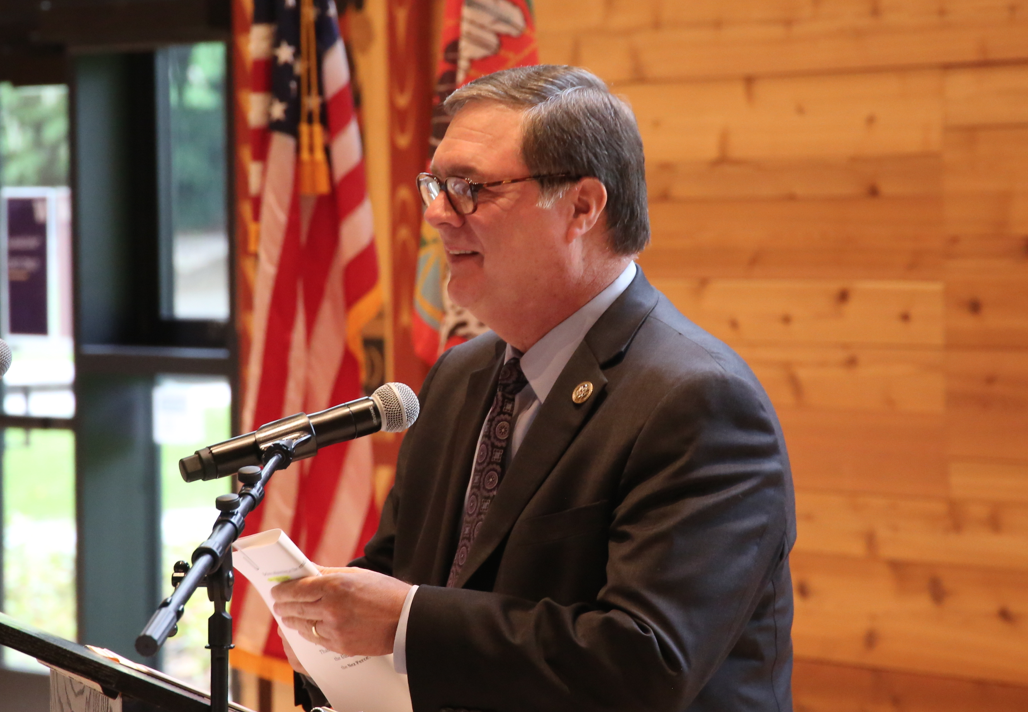 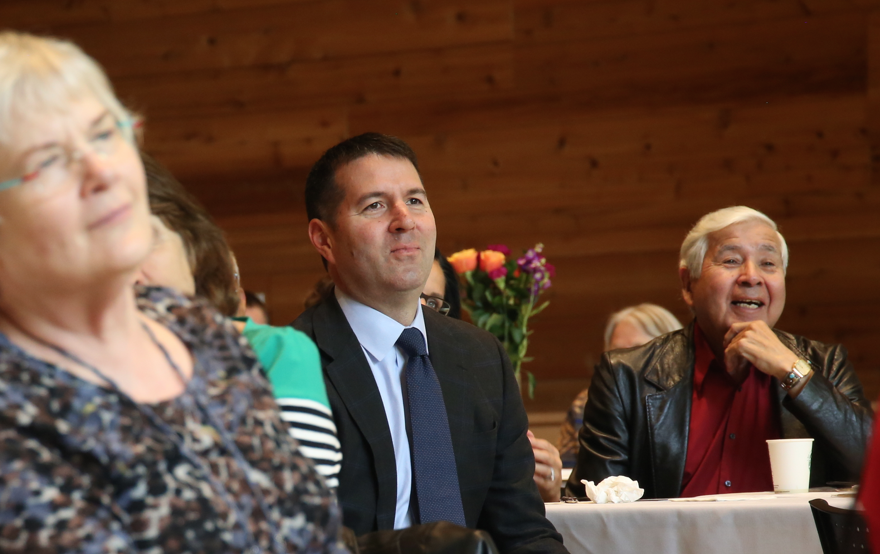 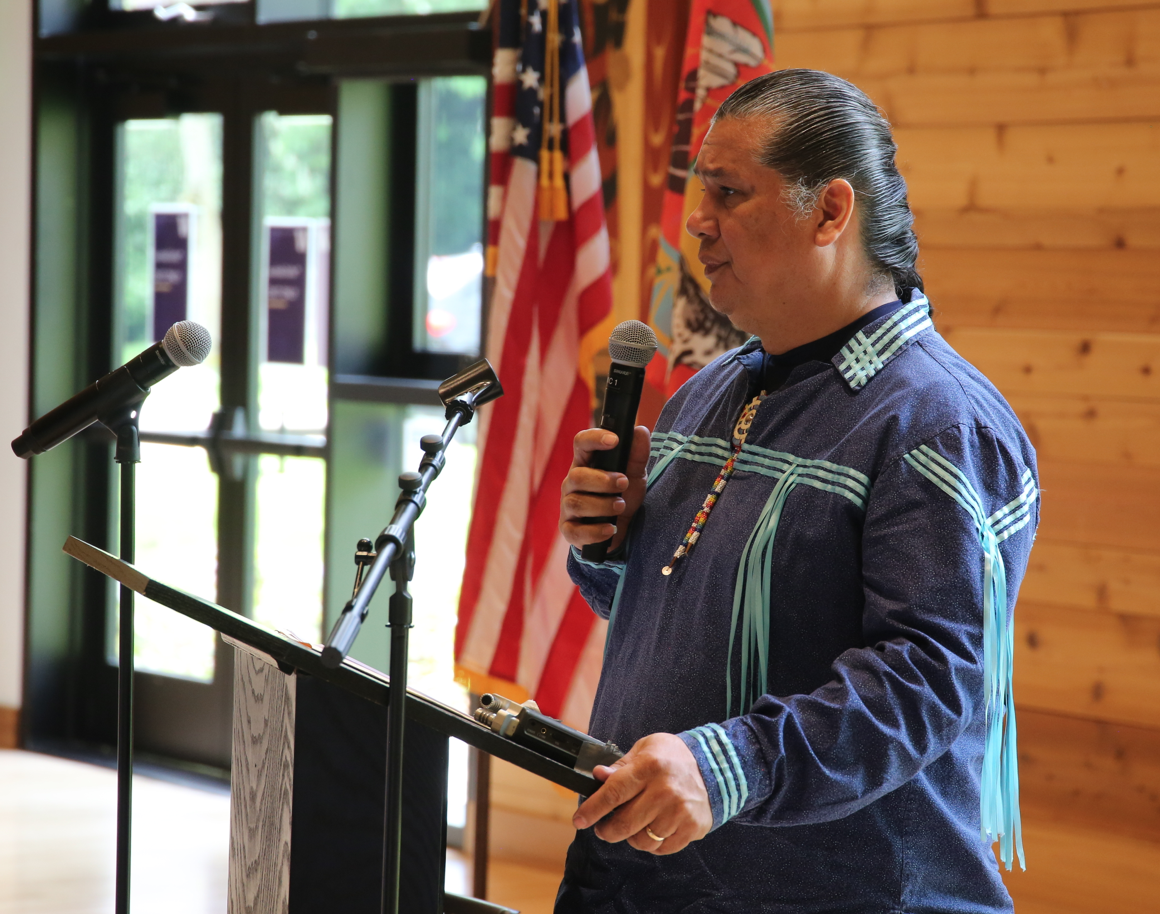 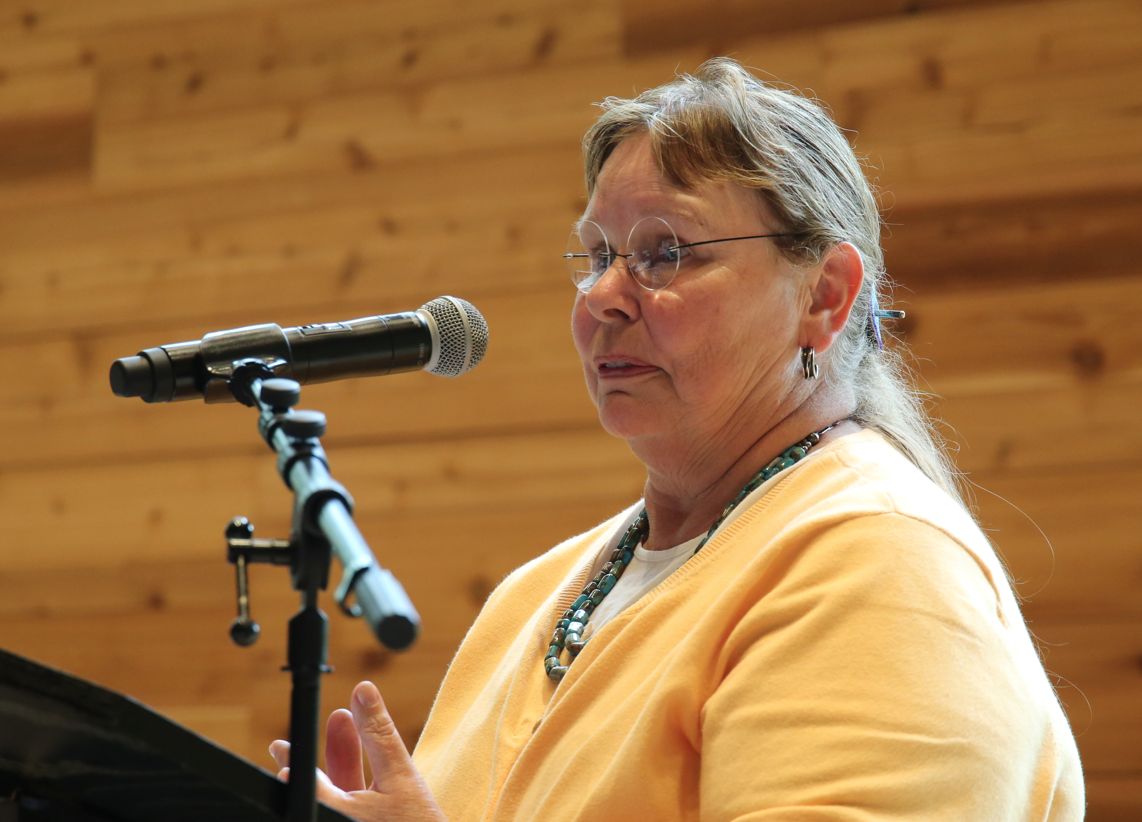 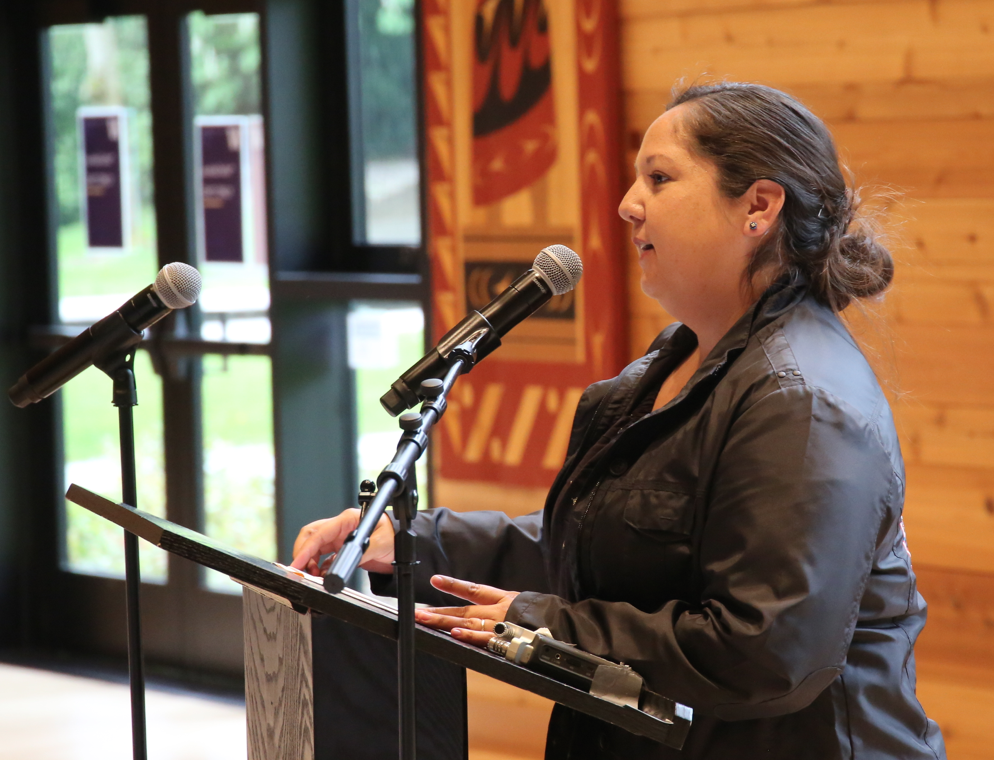 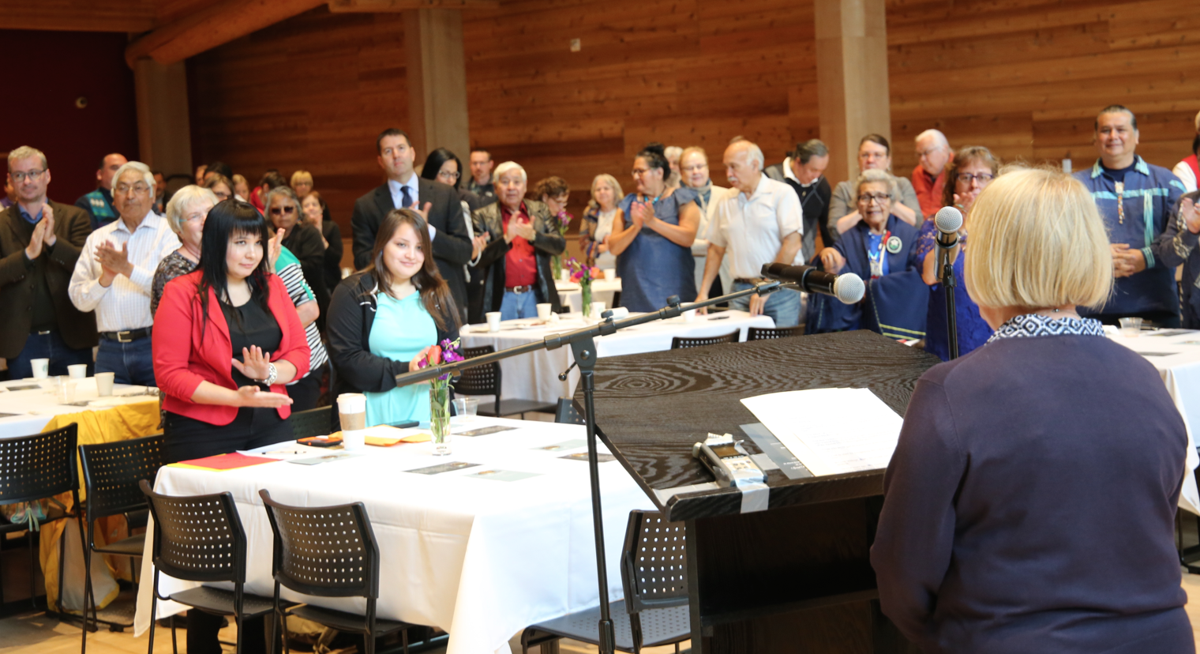 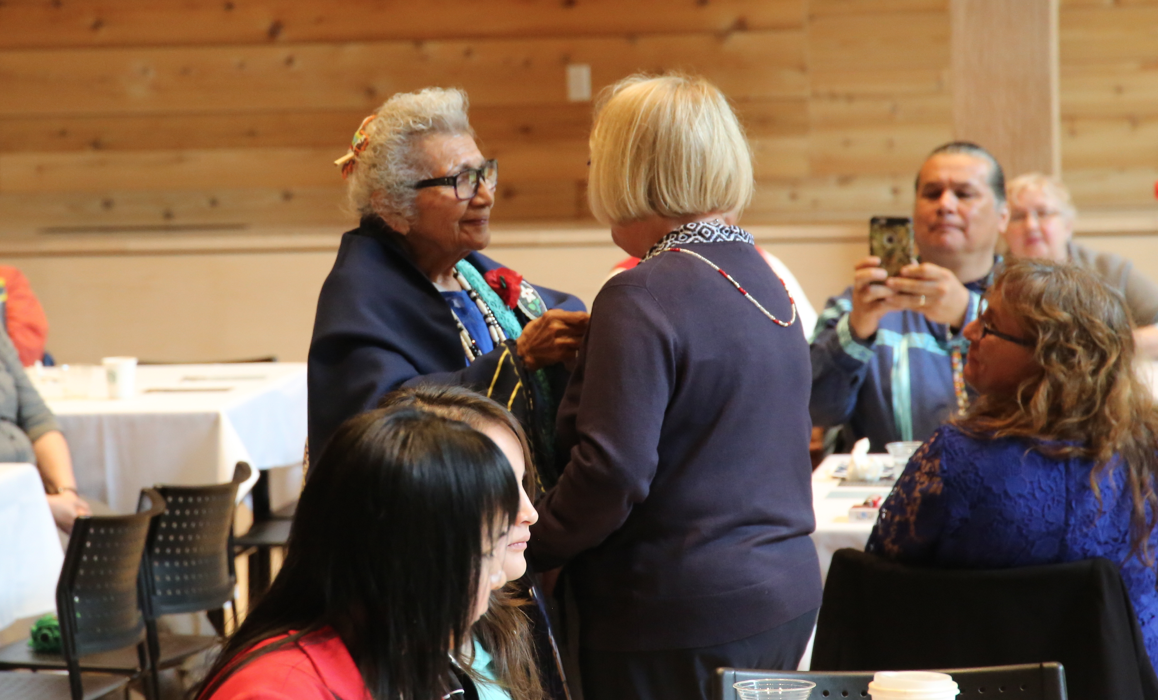 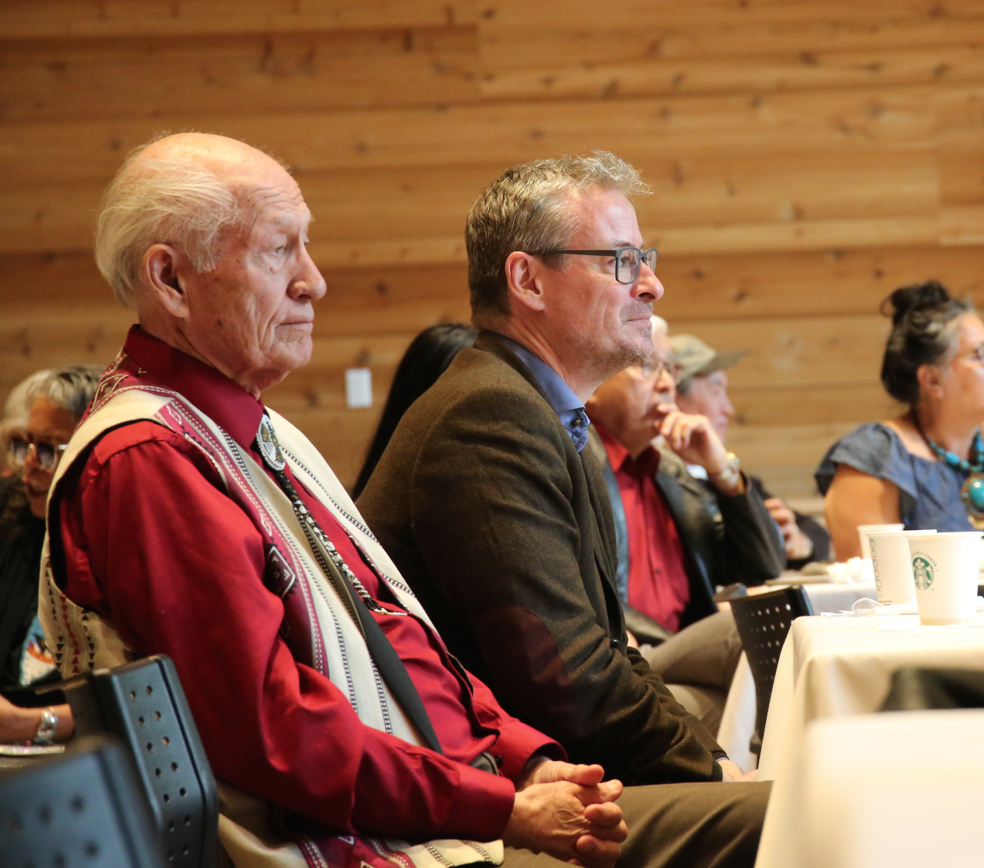 SEATTLE – Public officials, lawyers, historians tribal leaders from present and past, tribal elders and a handful of young adults gathered here Friday to celebrate the return of the Ancient One, known widely as Kennewick Man.

The five claimant tribes — including the Colville, Umatilla, Yakama, Wanapum and Nez Perce — sponsored the event, which was emceed by Colville Business Councilwoman Bessie Simpson at the University of Washington’s Intellectual House (wǝɫǝbʔaltxʷ).

“We are here today because of the hard work of so many people who ensured the Ancient One was returned to his homeland for a respectful burial,” Simpson said, naming those in attendance: Sen. Patty Murray, D-Wash.; Congressmen Denny Heck, Adam Smith and Derek Kilmer; and Congresswoman Suzan DelBene. “Thank you all for your tireless efforts in bringing our ancestor home. The claimant tribes requested the Ancient One be returned to them for reburial over 20 years ago. Today, we gather to express our appreciation to everyone who helped make that happen.”

Murray led the event off to a standing ovation following Simpson’s introduction.

“Senator Murray was the first member of Congress to introduce the ‘Bring the Ancient One Home Act of 2015,’” Simpson said. “This bill expedited the return of the Ancient One to the descendant tribes. The legislation was ultimately included in the Water Infrastructure Improvements for the Nation Act. What a huge ‘win’ that was.  The WIIN Act became law in December 2016 setting, in motion the transfer of the Ancient One to the Tribes. Thank you so very much Senator Murray for having such a deep regard for our cultural practices and religious beliefs.”

“It’s an incredible and final chapter of the Ancient One,” Murray said. “It’s not everyday you get to celebrate something Congress got right [laughter]. That’s a testament to an awful lot of people who worked tirelessly to make this day possible to return the Ancient One to his rightful place. People who never quit.”

Murray recalled a 2015 visit to The REACH in Richland, where she announced her support for the Bring The Ancient One Home initiative.

“It wasn’t until I gathered with tribes on the banks of the Columbia River that I really got it,” she said. “You spent two decades fighting this. It was clear you’d spend another two decades on it if that’s what it took. The Ancient One is one of you, and returning him to the ground where he can finally rest is really important. So to tribal members, thank you for your persistence, your patience and for taking the time to help us understand the significance of the Ancient One.”

Heck was praised for his sponsorship of the house version of the Bring the Ancient One Home Act “and held firmly to his position — and the tribes’ position — that the ‘science is settled’ and the Ancient One belongs with the claimant tribes,” Simpson said. “The court ruled in favor of the scientists who incorrect determined the Ancient One was not Native American and wanted to keep him for relentless studies and tests. Thank you, Congressman Heck, for your humanity and your empathy. Your forceful support of the truth, that the Ancient One is in fact, Native American and the ancestor of the native people of the Columbia Plateau and that he rightfully belongs with us was enormously important.”

He joked Murray is right “almost all the time.”

“She’s never been more right when she said before we adjourned at the end of the year: ‘Congress did the right thing,’” he said. “We passed the law to expedite the return of the Ancient One. ... All the Columbia Basin tribes together were absolutely critical in gaining momentum and support. Particularly chairman Michael Marchand from the Colville Tribes. JoDe Goudy from the Yakama. Rex Buck Jr. (Wanapum) and so many others.”

Heck said he was asked back home in his 10th congressional district of Olympia and Tacoma why he supported returning the Ancient One. He recalled working for Gov. Booth Gardner in 1989 when the Centennial Accord was signed with the state’s tribal nations.

“One of the great honors of my life was having a front row seat,” he said.

Both Murray and Heck praised Newhouse, who could not attend due to health issues.

“Without (Newhouse and Heck), legislation easily could have been lost within the shuffle of the House,” Murray said. “But thanks to our collective determination we continued to find a path forward.”

Congresswoman Suzan DelBene, who co-sponsored the house bill, was invited to speak next. Simpson applauded DelBene for willingly supporting the bill.

“I was honored to support legislation in the House,” she said. “This is a perfect example of how when folks work together to get things done. It’s a great reminder to all of us in these very divisive times. I know that working together and doing things that have an impact on all our communities are something that all of us strive to do in the other Washington. I want to applaud the hard work and determination for everyone in this room.”

Gov. Jay Inslee, who was not in attendance, was commended for keeping pressure on the Army Corps of Engineers “to expeditiously repatriate the Ancient One to the Claimant Tribes while his State Department of History and Archaeology worked with the Tribes towards a congressional legislative fix,” Simpson said.

Dr. Allyson Brooks, of the state department of archaeology, was invited to speak. Simpson said “she joined the fight to bring the Ancient One home, renewed the push for repatriation, assisted in drafting the legislation that would ultimately repatriate our ancestor back to us.”

Brooks stated: “We have an amazing team in Washington state. First I want to congratulate the tribes. He was your family member and you never gave up. It was amazing to me how you never, ever gave up.”

Next, Dr. Julie K. Stein, the director of the Burke Museum at the University of Washington, was summoned to the microphone. The Burke Museum housed the Ancient One from 1998 until his return in 2017.

“During the Ancient One’s stay at the Burke Museum, the claimant tribes have always been welcomed to visit the Ancient One.  He was never displayed at the museum,” Simpson said.

“The Burke Museum took on the great responsibility of taking on the Ancient One in 1998,” Stein said. “We fulfilled this responsibility in the utmost seriousness during the 20 years he was with us. During that time we were moved by the caring and dedication of you, the tribes, who visited the Ancient One often, and — as we heard before — never gave up the fight for him, and knowing that he was your ancestor. Despite the difficult circumstance, we were grateful for the relationships that were formed while we took care of the Ancient One.”

Tribal leaders were then were given the opportunity to come speak. Andy Joseph Jr stepped forward for the Colville Tribes.

“It was well over 13 years ago, I got to be part of the Culture Committee for our council,” Joseph said. “Before our tribes were kind of fighting over the remains. We pulled together; this is the outcome. It really makes my heart happy.”

When the microphone opened to the rest of the room, Jackie Cook, tribes’ repatriation specialist, gave examples of the cooperation between the tribes in the years following the discovery and unity of the Ancient One. She also acknowledged Adeline Fredin, a tribal elder who could not attend.

“Adeline held a strong conviction that, of course, the Ancient One, was our ancestor,” Cook said. “This repatriation, this affirmation of him being Native American was important to the whole country. The claimant tribes have worked together for the past 10 years and together have repatriated over 1,200 individuals. That’s amazing.”

Brian Gunn, whom Colville Business Council chairman Michael Marchand said did most of the legislative work, said: “I was thinking about saying something for the lobbyists, but figured it had all been said better than me. It’s just an honor to see current and former Colville leadership here: Harvey Moses, my father Virgil, Wendell George; folks I haven’t seen in several years.”

The Return of Eske Willerslev

Danish evolutionary geneticist Eske Willerslev attended the event. He and a team of scientists conducted the independent study that linked the remains to the Colville Tribes, which was announced in June of 2015 at the University of Washington’s Burke Museum.

“It’s amazing. It’s incredible that the DNA testings that we did kind of resolved this long-standing issue, right,” he said. “And you can see how big of influence this has had on a lot of people. It’s extremely touching. I’m doing basic research. I’m doing things that might have an impact after I’m dead, but this was immediate.”

Willerslev said his work on the Ancient One has changed perspectives across Indian country.

“Other Native American groups across the United States are suddenly showing much more interest in what we’re doing because of the outcome of this investigation,” he said. “In fact, the Paiute-Shoshone down in Nevada have a very similar case to this. [They] also for 30 years have been struggling to get remains back from a museum. The museum has said ‘no’ because we don’t know whether it’s Native American or not and there’s also some cranial metric studies where they came to the conclusion it was not Native American. They got in touch with me and said can you do this DNA testing for us on these remains? And they made a written deal with the museum that if it comes out as Native American they will get it back. We did the testing and not very surprising to me it came out as a Native American. Just recently they got it back.”

Working with the remains of Native Americans has been a unique experience, Willerslev says.

“It’s really cool for me as a scientist to work on these remains,” he said. “Us as scientists are going to learn something about Native American history and it’s very good. Especially seeing how it influenced so many people in such a positive way. Of course this is a dream right, you want to do good as a scientist and you’re happy to do good so it’s great.”

He noted the press conference in 2015 was not about himself, for a change.

“The coolest thing about that press conference was for the first time when you’re doing science, it wasn’t about us as scientists. Normally, it’s like ‘Oh yeah, what did you find?’ It was ‘What do the Native people feel about this result and what will be the next thing?’ It’s not really my call. We have to talk to the tribes. It was amazing.”