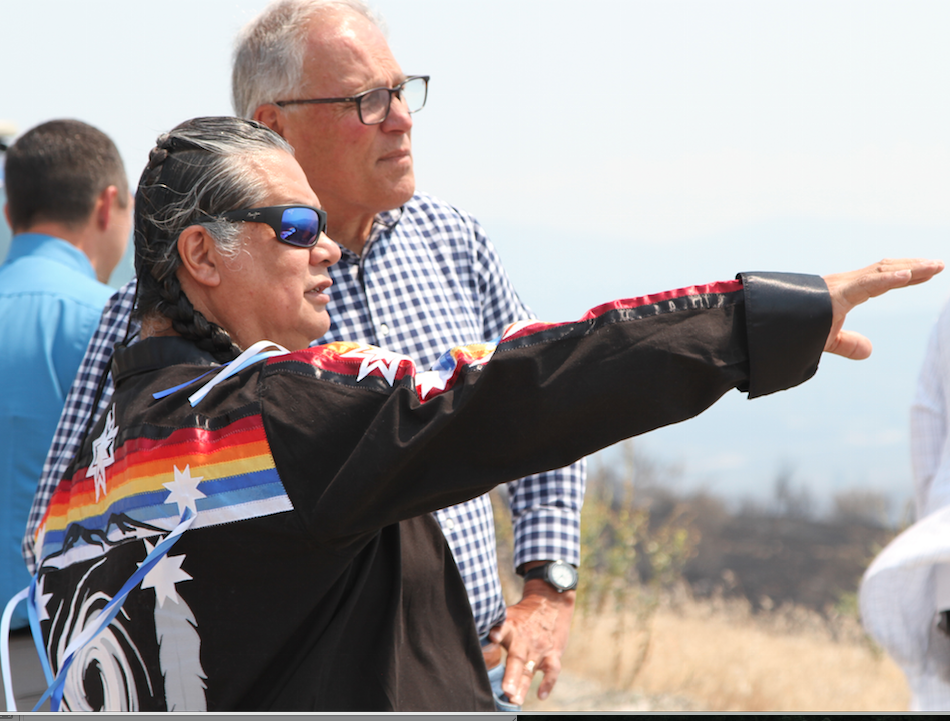 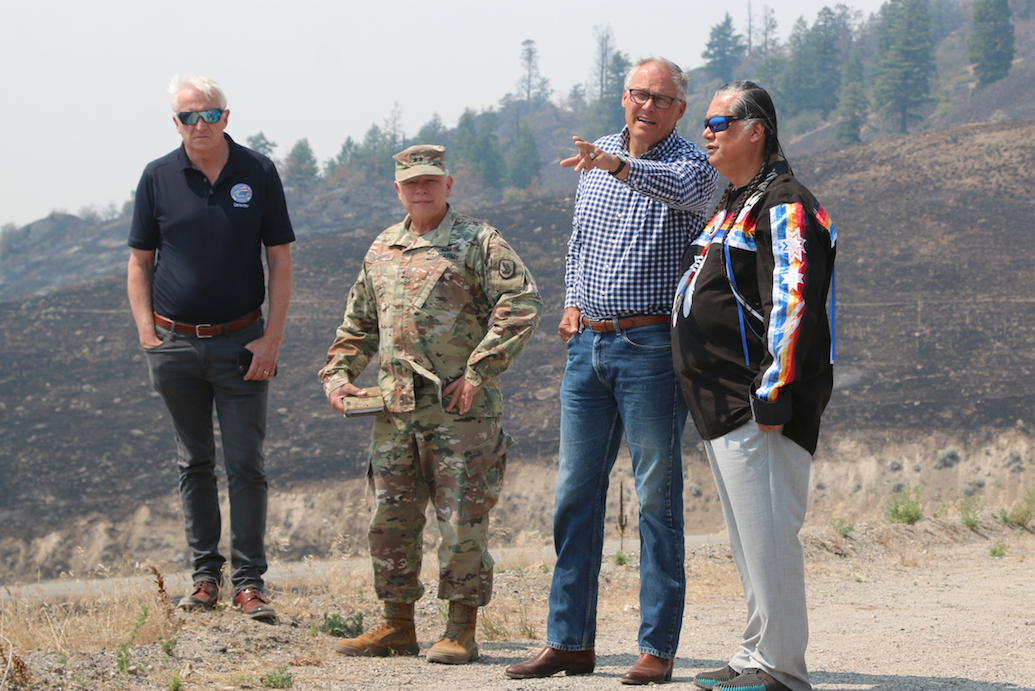 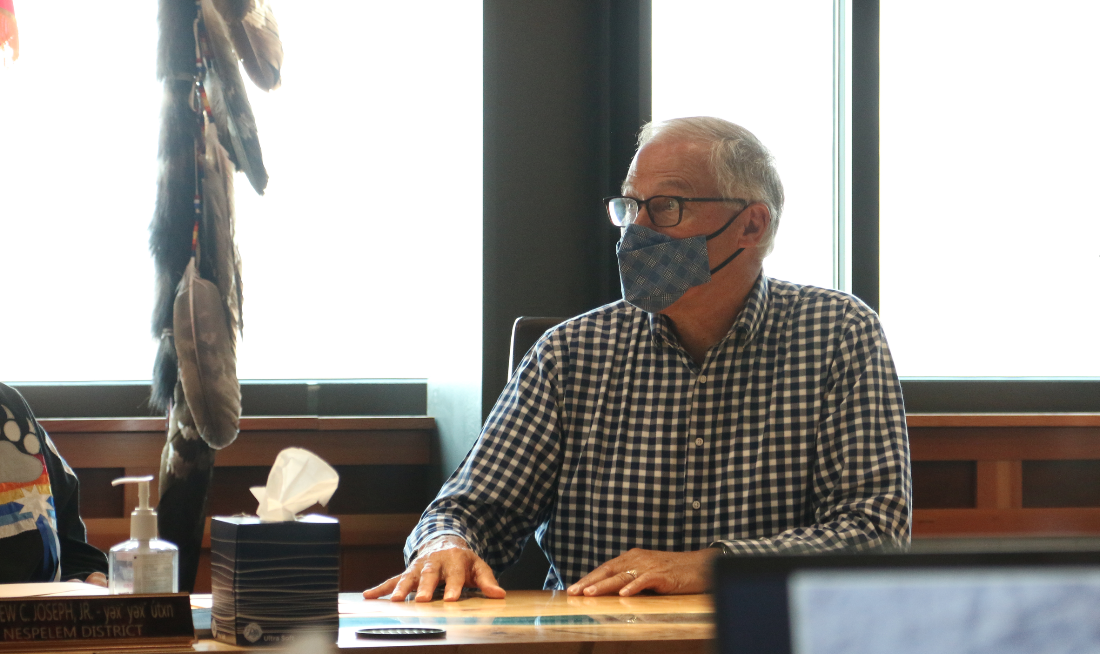 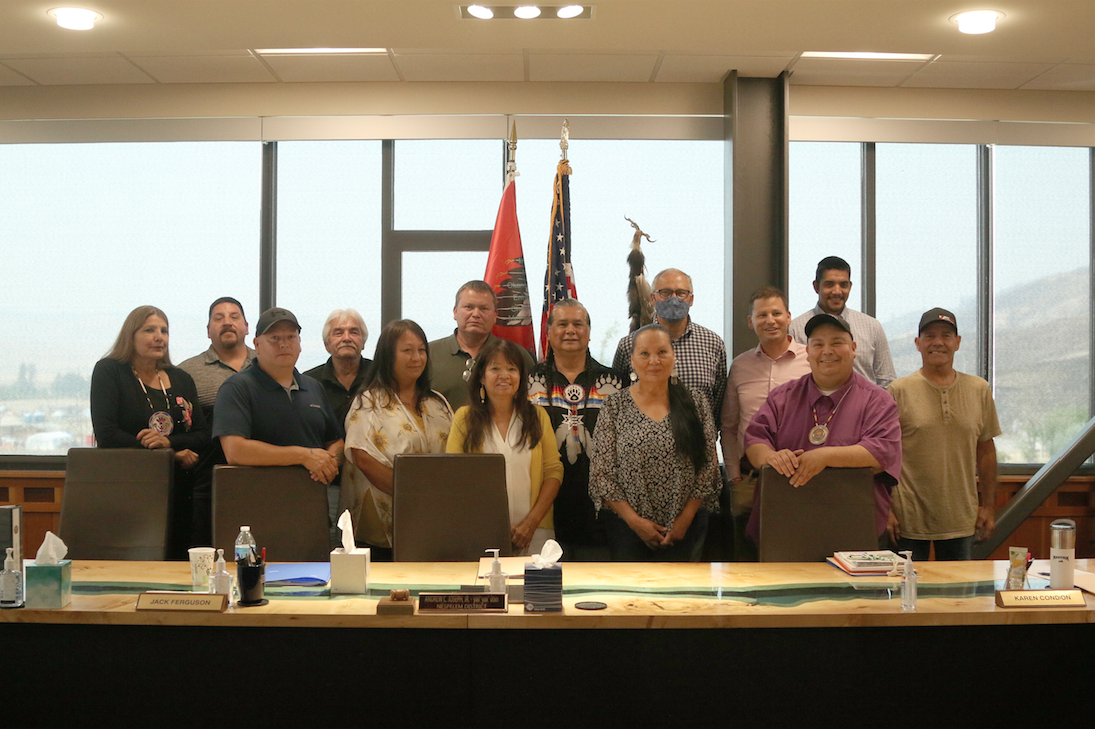 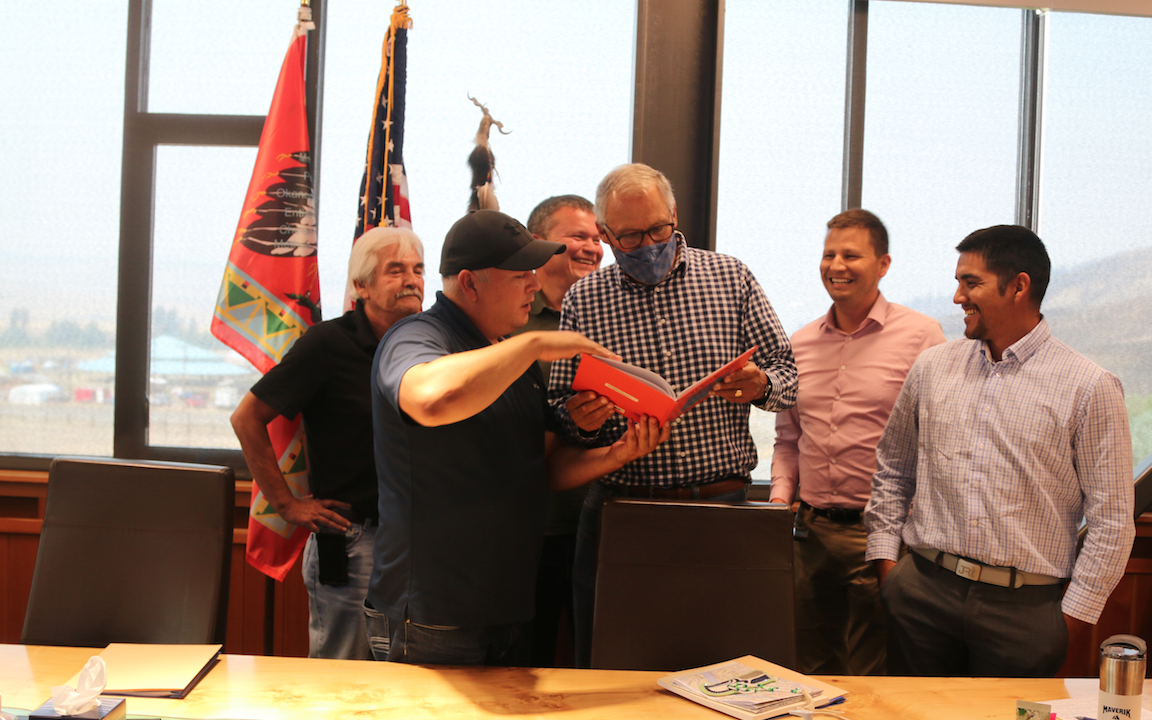 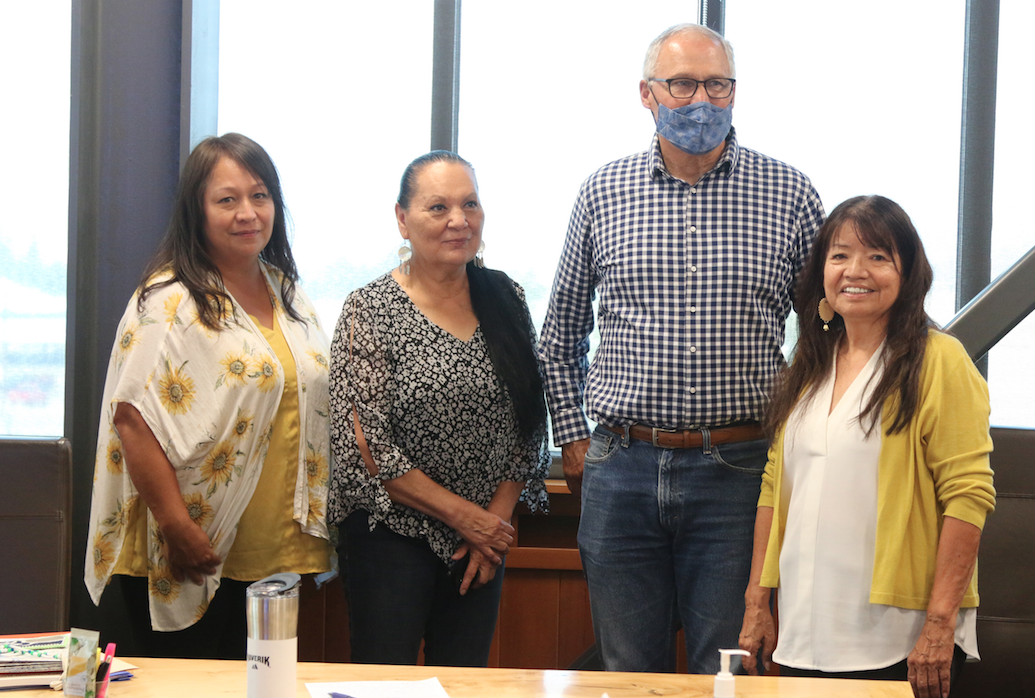 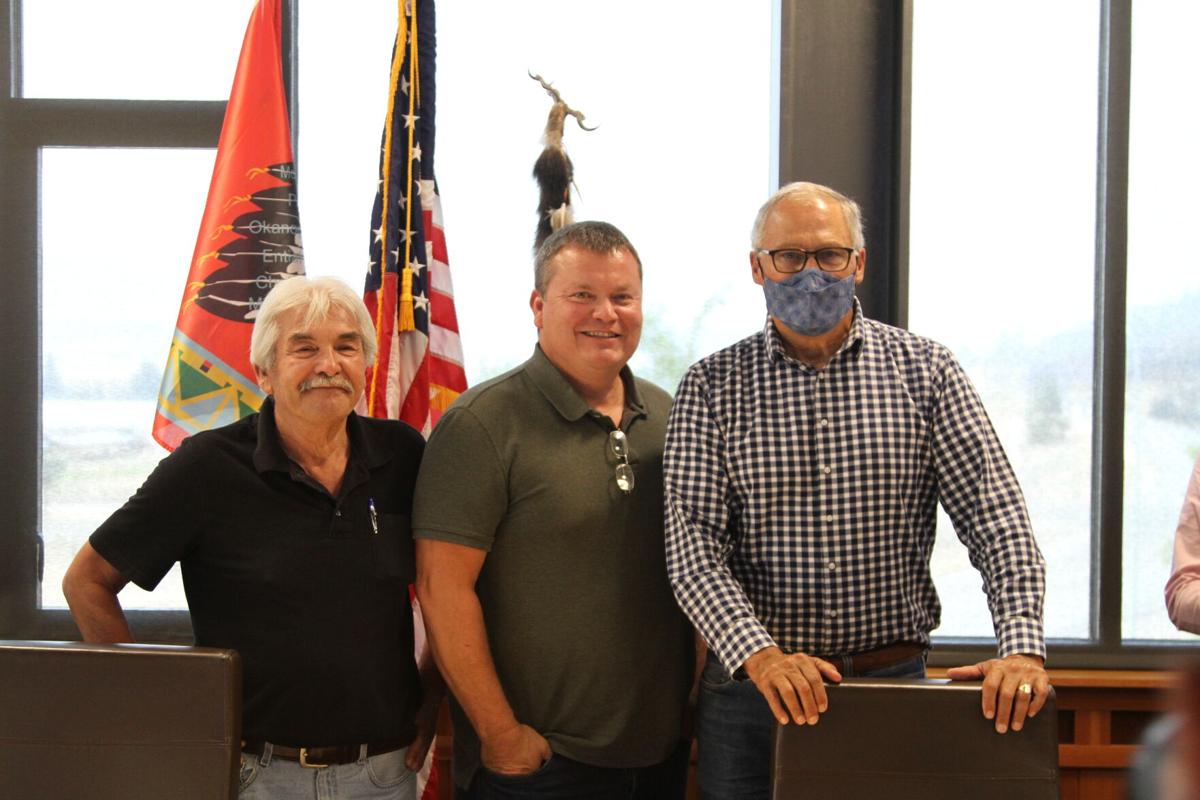 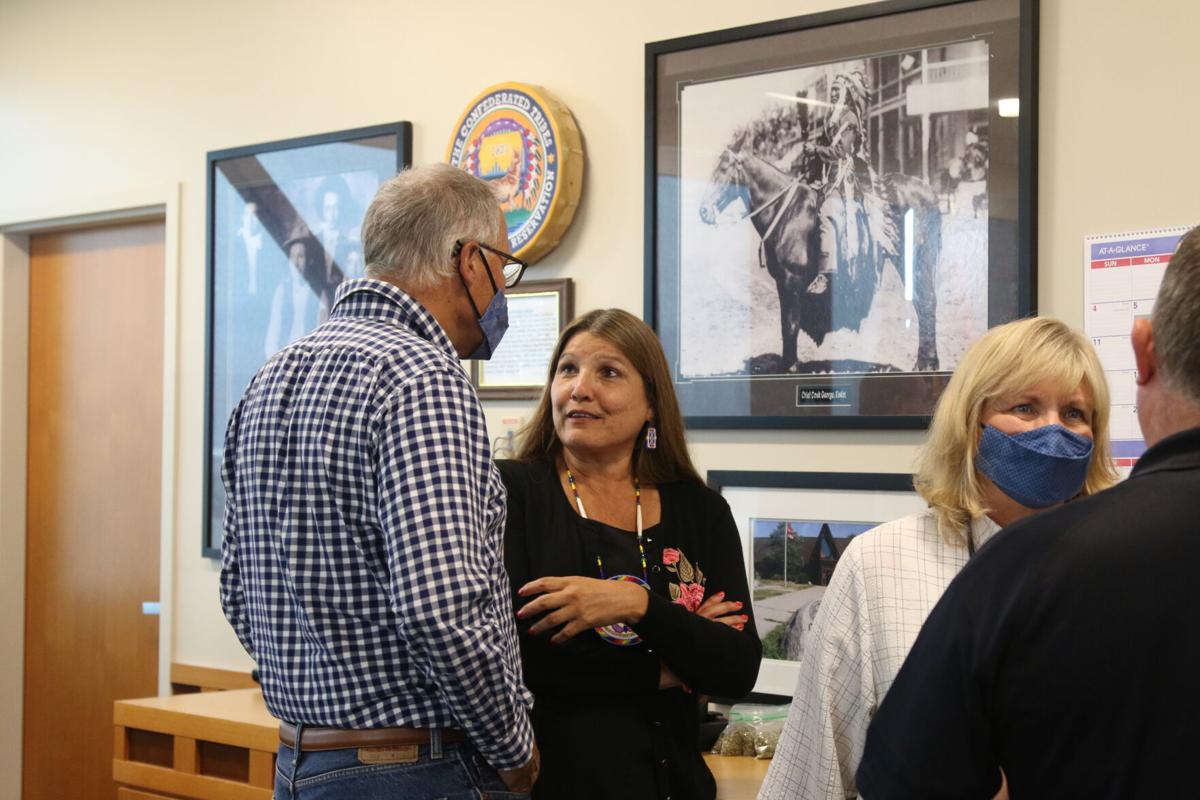 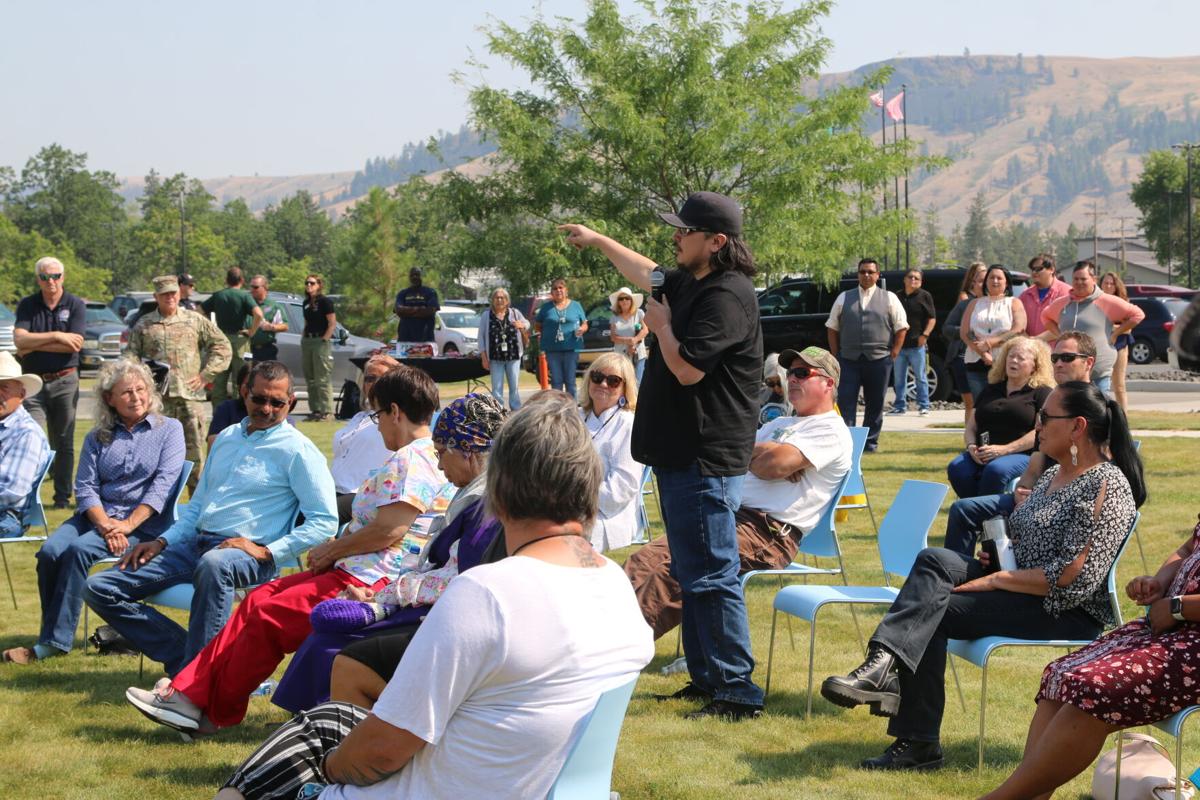 Colville tribal member Steven Wynecoop, who lost his home in the Chuweah Creek Fire, thanks Inslee for his visit and bringing attention to the fires 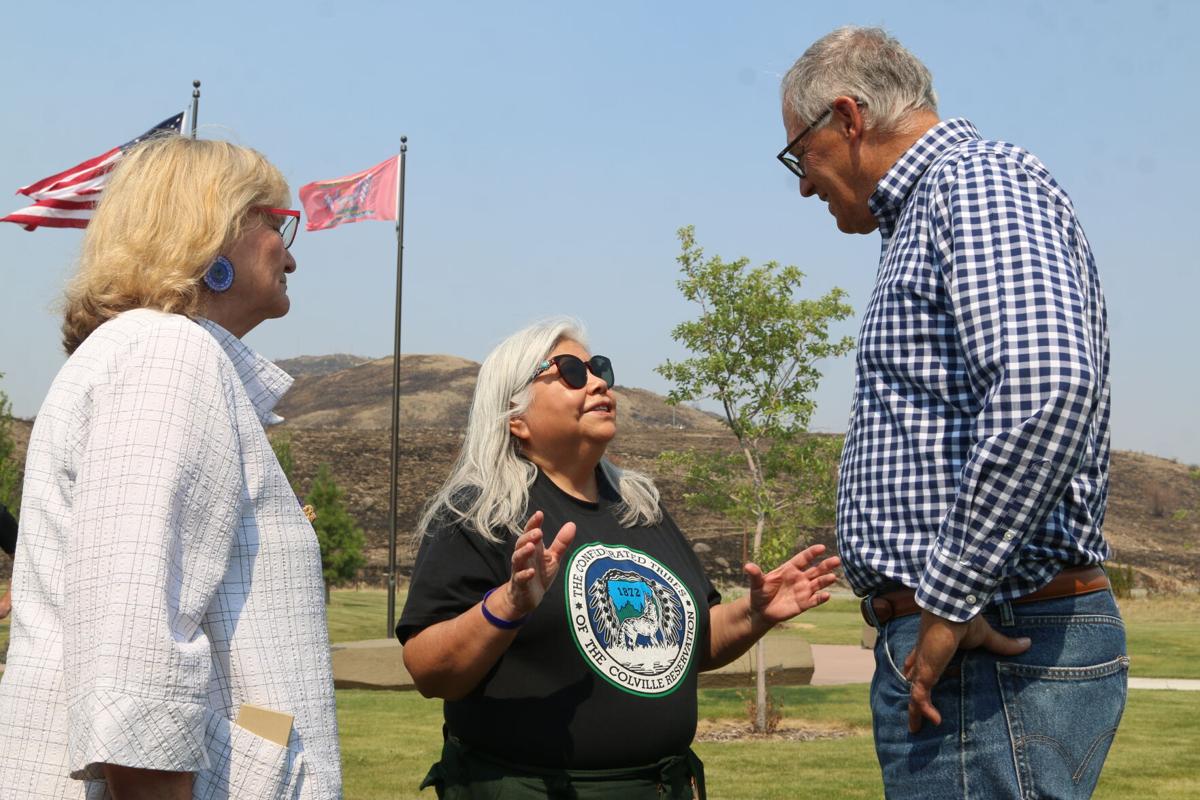 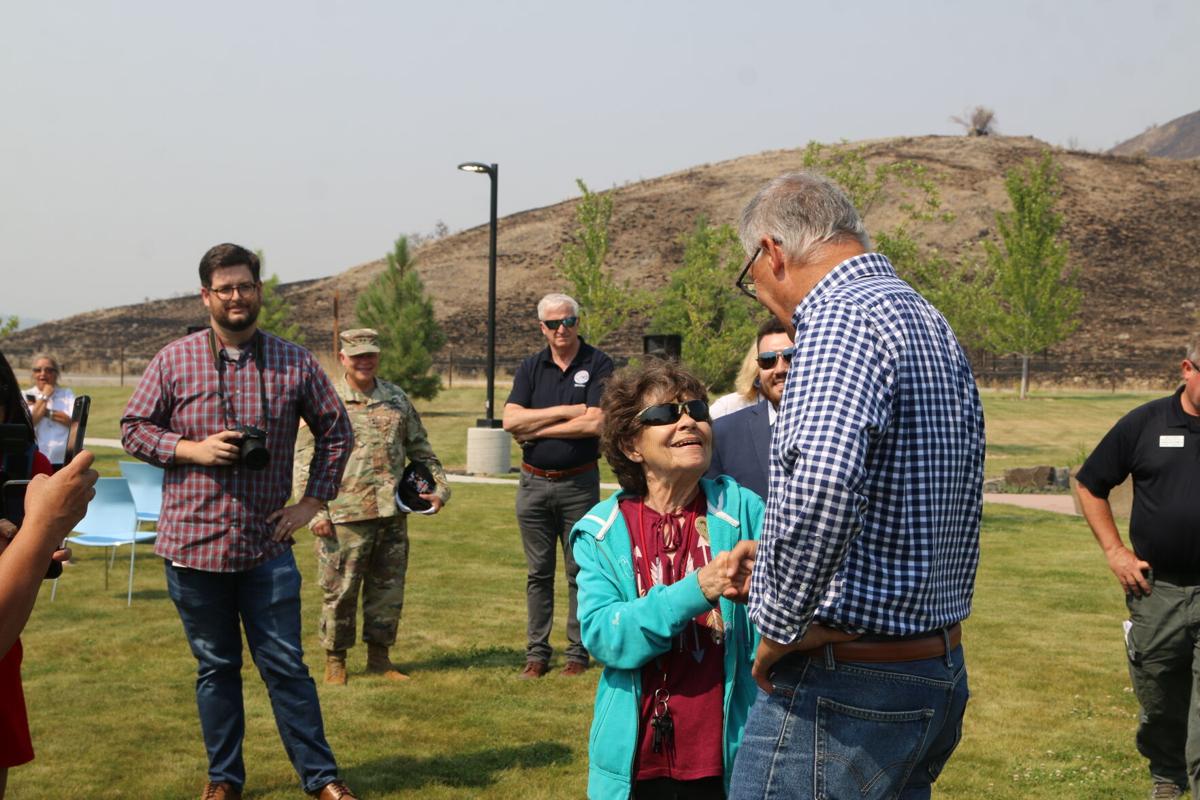 Doris Picard talks with Gov. Jay Inslee at the Colville Tribal Agency, July 21, in Inslee’s visit to meet with the CBC, fire management teams and the Nespelem Community 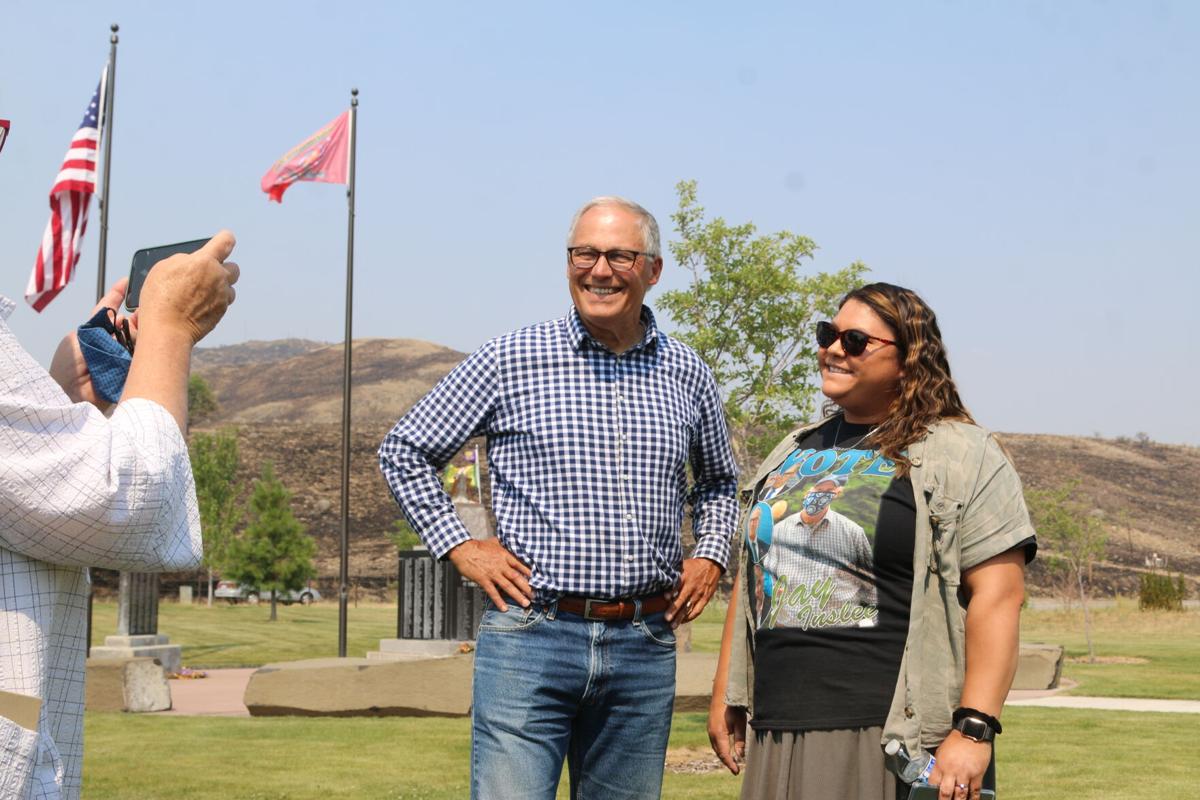 Betsey Pleasants takes a photo with Washington Gov. Jay Inslee at the Colville Tribal Agency, July 21, in Inslee’s visit to meet with the CBC, fire management teams and the Nespelem Community 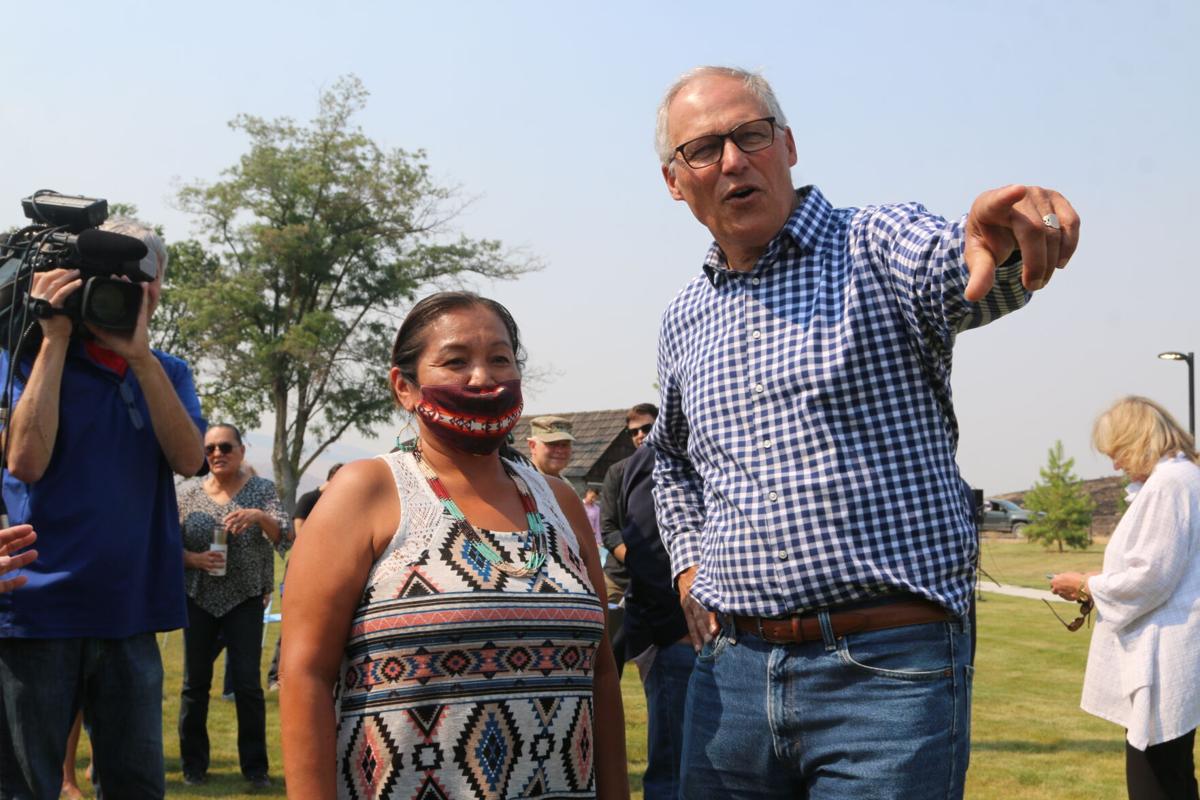 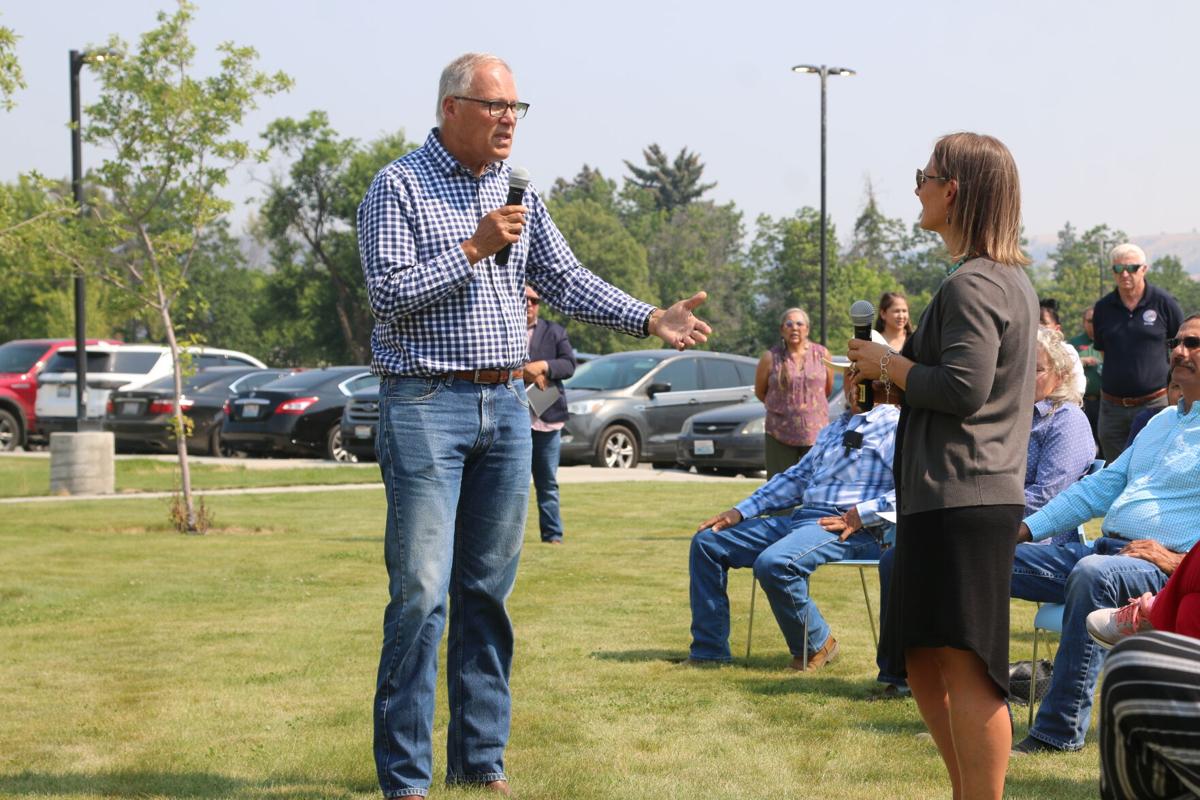 Colville tribal member Steven Wynecoop, who lost his home in the Chuweah Creek Fire, thanks Inslee for his visit and bringing attention to the fires

Doris Picard talks with Gov. Jay Inslee at the Colville Tribal Agency, July 21, in Inslee’s visit to meet with the CBC, fire management teams and the Nespelem Community

Betsey Pleasants takes a photo with Washington Gov. Jay Inslee at the Colville Tribal Agency, July 21, in Inslee’s visit to meet with the CBC, fire management teams and the Nespelem Community

NESPELEM – Washington Governor Jay Inslee made his way out from Olympia to the Colville Indian Reservation meeting with the Colville Business Council, incident command staff from both Chuweah and Summit Trail fires and community members most impacted by the fire at the Lucy Covington Government Center in Nespelem, July 21.

The Chuweah Creek Fire had blackened and burned 36,407 acres in the Nespelem Valley, working eastward through Chuweah Creek, Joe Moses, and Buffalo Lake areas toward Keller Butte, according to a daily update distributed by Incident Command Northwest Team 12.

The fire that started from lightning July 12, burned over three homes and 8 other structures and had killed livestock and wild life as it quickly spread under high winds.

The entire town of Nespelem was evacuated as flames approached from the south and southeast, and as of July 21 only 347 firefighters were assigned to the blaze.

Along with the Chuweah Creek Fire, a number of other fires had started from the same lightning storm on the reservation, the largest of which - the Summit Trail Fire – had burned 5,359 acres. That has grown to 45,633 acres as of August 27.

Inslee had previously called and asked what resources would be most valuable to the team’s effort in fighting the fire, said CBC Andy Joseph Jr.

“We are so grateful the agency is standing and the people are standing,” said Inslee, meeting in CBC Chambers. “These are such difficult days dealing with COVID and these fires. No people in our state have been more stressed than your people for the last year and a half.”

Incident Command from both fires gave Inslee and CBC a detailed up - date on both fires.

On the Chuweah Creek Fire, Kurt Ranta, Operations Section Section for the NW Team 12, said the team has received more resources over the last several days - though through the first week of the fire, resources had been limited to focusing on protecting homes.

“We took over the fire Wednesday morning, the 14th. That was the largest day of growth we’ve seen, as the fire moved up to the ridge,” said Ranta. “The fire you see now, most of that occurred during that operational period. The fire grew about 15 to 20,000 acres in that operational shift. We had a lot of fire on the ground with very few resources. All we could do was come up with team members, put people around structures, get dozers out there and try to keep up with it. For the last week since then, this has grown a little, it has gotten into rough terrain in areas where it is in a different topographic range, where the fire is just backing but it is still active and in rugged terrain.”

On the Summit Trail Fire, Dan George, Operations Section Chief for the California Incident Management Team 10, reported when the team arrived to take over the fire Friday the fire was located on the top of the ridge and local resources had been able to keep it there.

“When we got here, there were more team members than there were boots on the ground, which happens in really rural areas,” said George. “We got engaged. We took the fire over Saturday morning...

We started looking at opportunities to go direct... It was looking really good Saturday. Sunday looked really good. We got a change of weather [Monday] and the fire doubled in size. We went from 2,000 acres to a little over 4,000 acres. It wasn’t just growth one way. It was growth on all four sides, north, east, south and west.”

Currently, the Summit Trail Fire has 332 firefighters battling the blaze and the daily update released by the team, Thursday, listed the containment as 2 percent.

“Could you describe the conditions?” Inslee asked the teams during their reports. “

We hear about how dry it is. Would that be an overstatement, an understatement?”

“I’ve been looking at climatology at least for Eastern Washington leading up to this period. Looking at our historical weather, the conditions of our fuels, this is one of the driest years we have seen since 1895,” said NW Team 12 Incident Commander Robert Shindelar.

“When we talk about the availability of vegetation to burn out there, we are experiencing fire behavior that we would normally experience at the end of August this early in July. Our fire seasons are not only getting longer, but the period of time where we are having to deal with extreme fire behavior and large fire growth is also increasing. I have a great concern about fatigue, going into the season. A normal fire season won’t normally start until the last week in July or the first week in August. We have already exhausted the system.”

Much of Inslee’s visit was based on his simple question at the beginning of the meeting with CBC: “How can I help,” he said, sitting next to Chairman Joseph at the CBC table.

“We on the state level are trying to address the fundamental problem, which is climate change,” said Inslee. “It is driving the frequency and the intensity of these fires. I was talking with the chair about the heat in the rivers that the salmon have to grapple with. I think your people are at the tip of the spear of climate change. You’re getting it from all sides, water temperature, fire, smoke.”

“We can’t fix today, because everybody is fighting for the same resources, but you guys at the government level need to develop funding programs for suppression and fire fighters,” said CBC member Norma Sanchez. “Nobody is coming back into that field. Nobody has money to train them. It’s going across the whole United States. I think at the federal level and the state level that has to happen. We need to get people trained and ready to go.”

During the 2021 legislative session, the state passed HB-1168, which allocated $125 million to wild land fire prevention and response over the next two years and which in part allocated some funding to firefighter training.

“We are appropriating millions of dollars more for training and equipment, but the fires are growing faster than our appropriations,” said Inslee.

Along with a need for more firefighters and firefighting resources, the group also talked about a need for more prescribed burning and prevention activities that would reduce fuel build up across the landscape.

As the fire approached Keller Ridge, evacuation orders were placed on much of the San Poil Valley but the WSDOT ferry between Keller and Wilbur on State Route 21 had been out of service since July 9 due to mechanical issues with the steering, according to WSDOT releases.

The incident command team working the fire reported the U.S. Coast Guard had approved emergency response use of the vessel, July 19, but Coast Guard regulation prevented normal traffic operation until the steering issues were repaired.

A release from the team noted, “WSDOT’s authorization to operate the vessel for emergency use includes:

• The evacuation of residents if the ferry is the only means possible.

• Assisting with the movement of fire equipment and emergency personnel.”

“With the ferry down, we have very limited access in and out of the entire Keller district,” said Ferguson.

“It is a public safety issue and a hazard. I think something needs to be done. I commend the fire crews for stopping that fire from coming into the San Poil Valley. The only way to get out, with the way that fire was going, would have been to go out across the Keller ferry and it’s down. It’s been down. It’s down all the time. The right guy to talk to in the state is the governor, and I think a phone call to the DOT or somebody that can help fix that problem is needed.”

“We have felt very isolated,” said Jackson. “There is a lot of fear in the community because of the fires on both sides of the valley. That was a concern we have... It’s really scary.”

“A lot of people in Washington state are in trouble right now, but this area might be the most impacted,” said Inslee. “You’re the most fragile, the most exposed. You have only one way out of town if the ferry doesn’t work, which we should fix with a transportation package. We understand how much real anxiety you have, which is justifiable.”