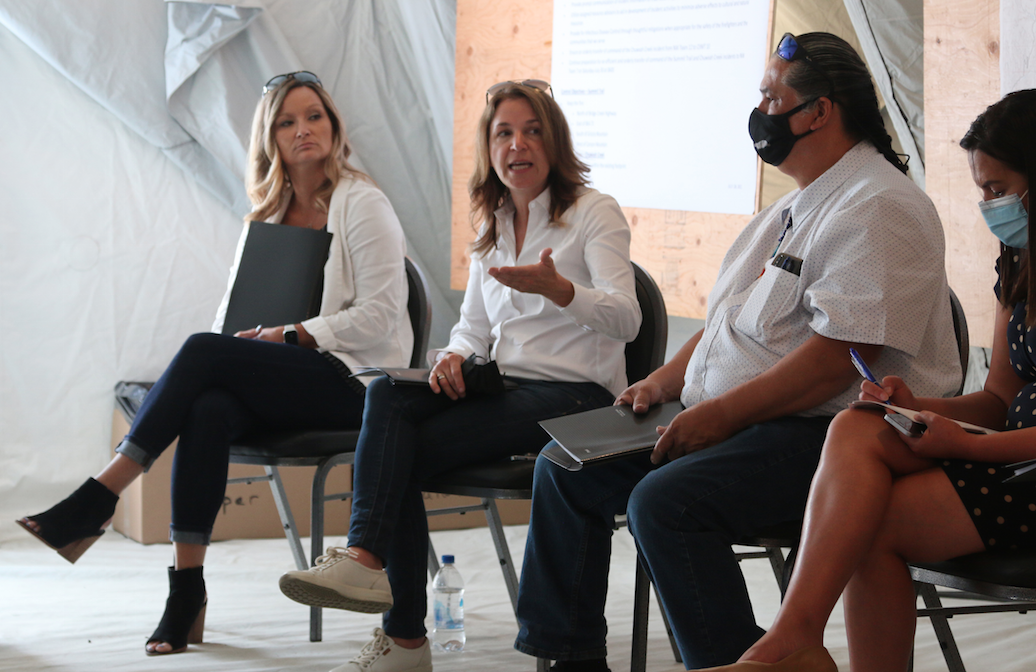 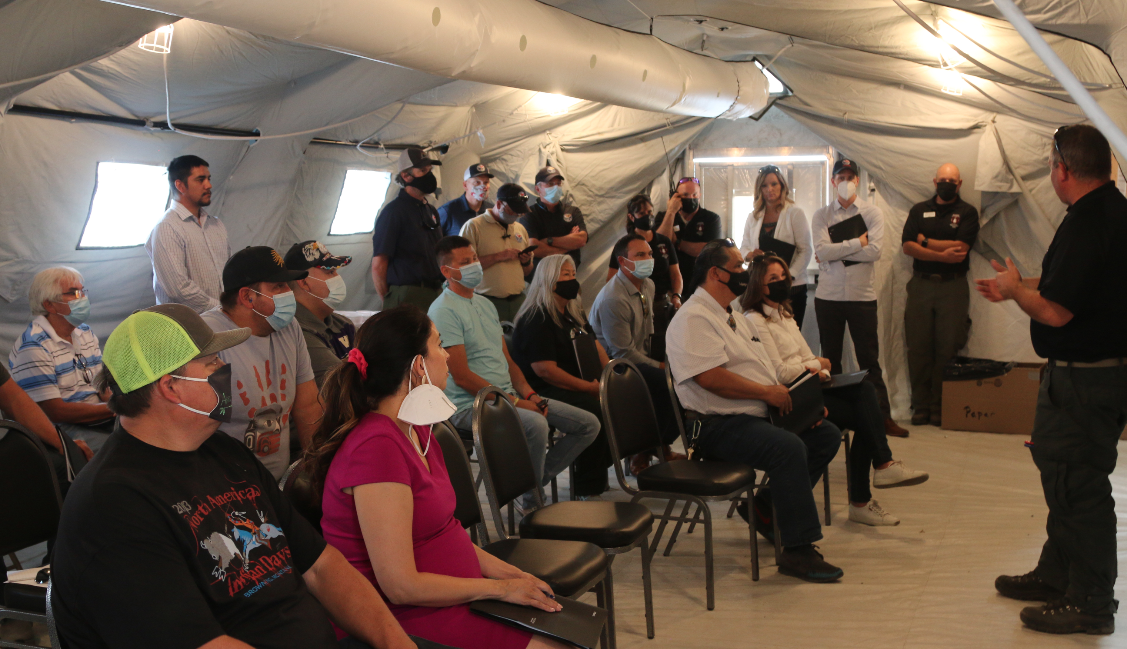 Commissioner Hilary Franz and the Colville Business Council are briefed on the Summit Trail Fire on Wednesday (July. 28) afternoon in Inchelium 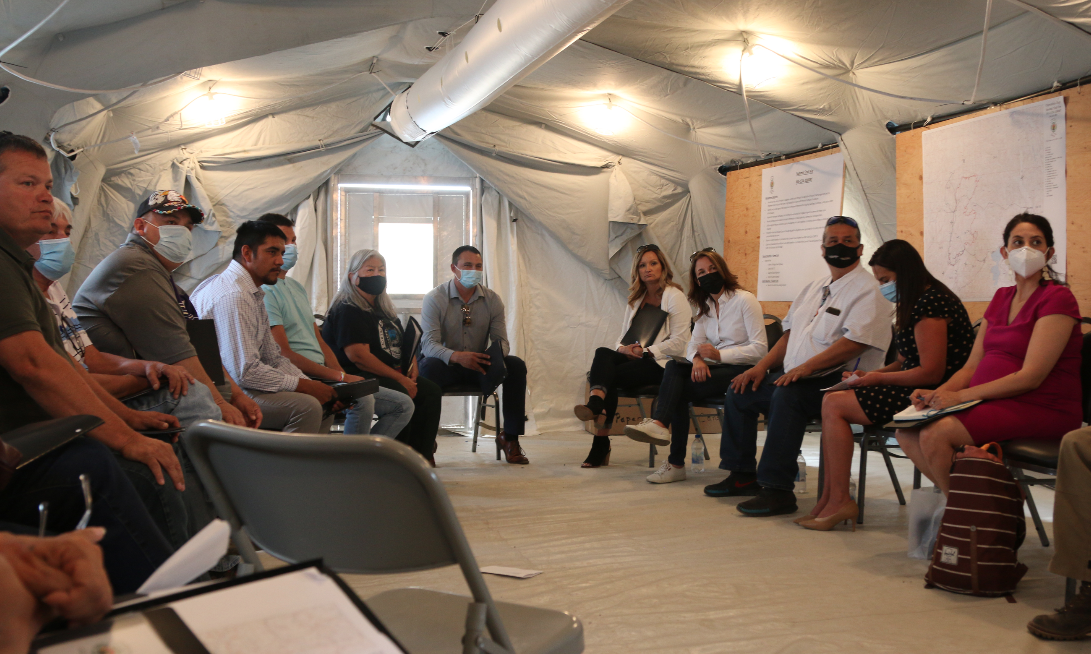 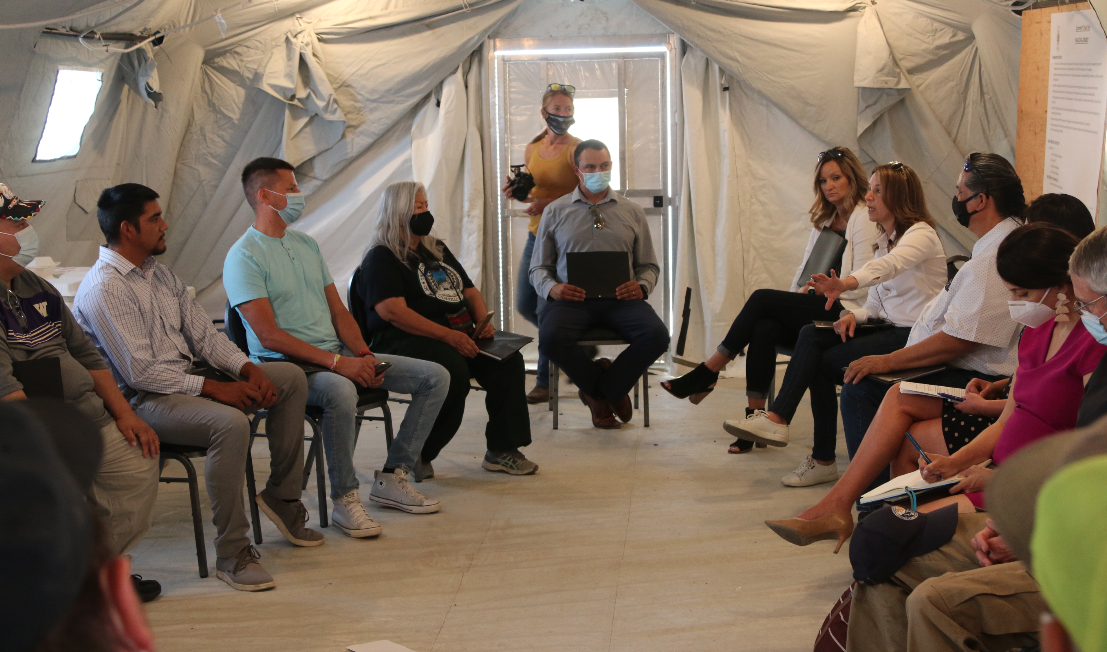 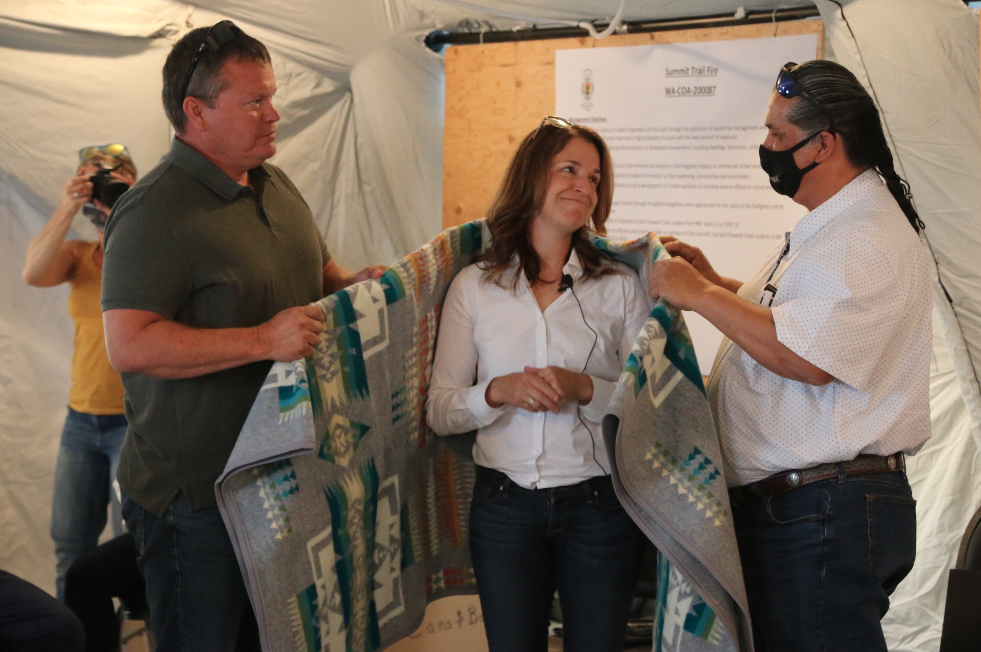 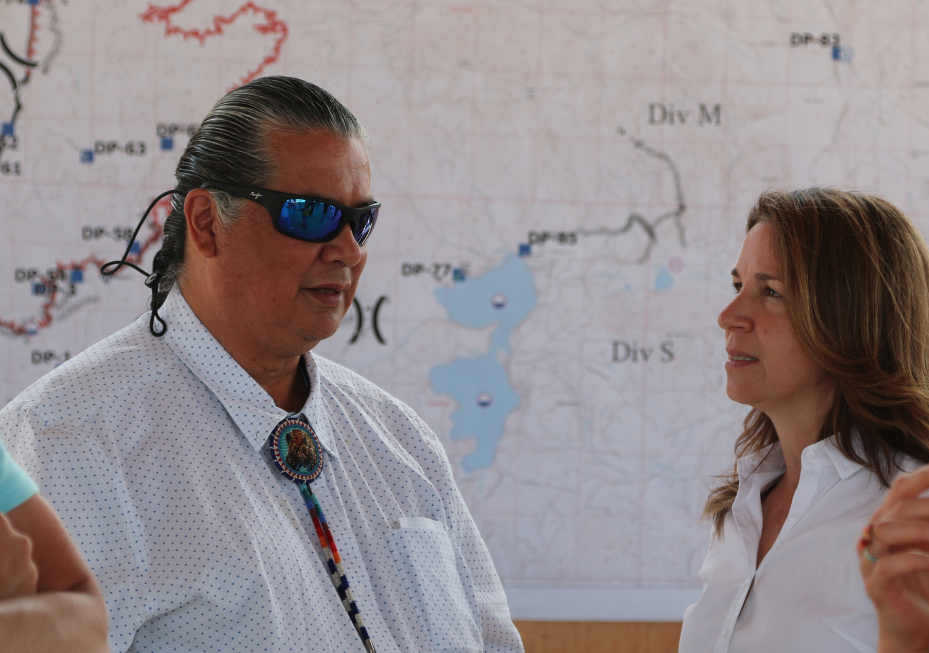 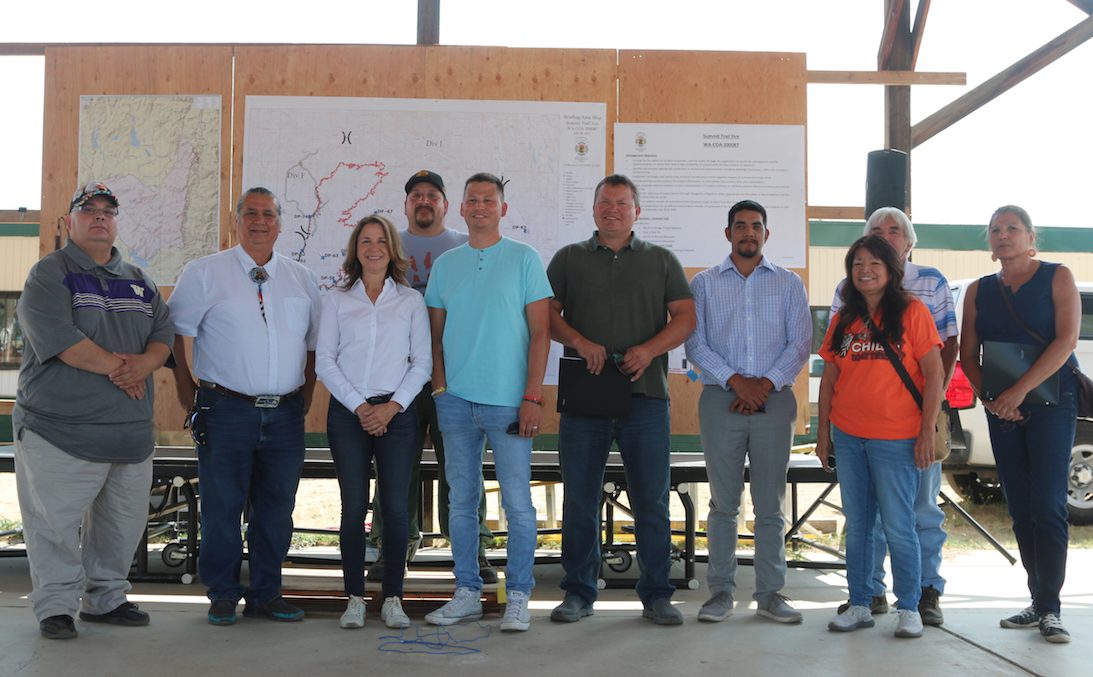 Commissioner Hilary Franz and the Colville Business Council are briefed on the Summit Trail Fire on Wednesday (July. 28) afternoon in Inchelium

INCHELIUM – Washington Commissioner of Public Lands Hilary Franz made the long trek from Olympia to the remote community of Inchelium to meet with members of the Colville Business Council, July 28, to discuss the recent Chuweah Creek and Summit Trail fires.

Franz met with the CBC to discuss the Summit Trail fire and several other topics.

Issues that were discussed ranged from the recruitment and training of the next generation of wild land firefighters to a discussion on fuels reduction, such as thinning and prescribed burning at different times of the year and forest management.

Like other parts of the region and state, forest fires are starting to become a common occurrence every summer. The state has already had a record-breaking number of forest fires and acres burned for this point in the year.

“We have over 11 large fires on the landscape. We’ve never had this many fires in the middle of July,” said Franz.

With numerous fires going on at the same time in different parts of the region, getting resources out here to the reservation in a timely manner was another topic that was discussed.

“It’s always a ramp up at the very beginning when you’re having so much competition for resources,” said Joseph Holford, Colville Tribal Agency Rep. “It’s a challenge for us all the time when it comes to fighting fires on this reservation. We do what we can, but even in times like this year, where we have severe drought, we have fires occurring and the terrain is aligning with the wind, it’s challenging.“

Franz understands that the Colvilles have been hit hard in the past 10 years when it comes to forest fires.

“Confederated Tribes of the Colville Reservation have seen more than 600,000 acres of their land burn in less than 10 years,” said Franz. “These lands and resources are so valuable to the Colville Tribe and they must be protected.”

With very little precipitation this summer it’s made conditions all over the reservation dry and vulnerable to destructive fires.

As of Aug. 5, the Summit Trail Fire has burned 22,305 acres and it remains only 15 percent contained.

“With this drought, it’s been very difficult,” said Kathy Moses, Mount Tolman Fire Center Public Information Officer. “We have a very good relationship with DNR. Again Hilary, thank you for coming out to the reservation.”

On the fire’s Inciweb webpage for the fire, the Northwest Incident Management Team 7 that is managing the efforts against the fire lists 718 firefighting personnel.

As Commissioner of Public Lands, Franz oversees and administers the state Department of Natural Resources and its 1,500 employees. She directs the management of 5.6 million acres of state-owned lands and supervises DNR’s Wildfire protection on millions of acres of state and private forestlands.

“Hilary and the DNR were very instrumental in helping us get additional resources for the recent fires which included air resources,” said Jarred-Michael Erickson, Colville Business Councilman from Nespelem District.

“We were honored to send resources to help fight these fires and understand why forest health is critical to wildfire prevention,” Said Franz.

Franz cited House Bill 1168, which Gov. Jay Inslee signed into law in May. The bill, which received vocal support from the Colville Tribes through the spring session, pledged $125 million to fight wild land fire over the biennium.

Near the end of the meeting, Colville Business Council members Jack Ferguson and Andy Joseph Jr. presented Franz with a Pendleton blanket.

“I was beyond honored to have been gifted a Pendleton blanket from the Confederated Tribes of the Colville Reservation during my visit,” said Franz “Chairman Andy Joseph Jr. explained that these blankets are given as a symbol of friendship, which is something that I treasure dearly.”

“Washington’s sovereign tribes are such important partners to me and my agency, and I have had the privilege of listening to and learning from their knowledge of our shared natural resources for 25 years. Limlmtx (Thank You) to Chairman Joseph. Jr. and to the Confederated Tribes of Colville for this tremendous honor.”