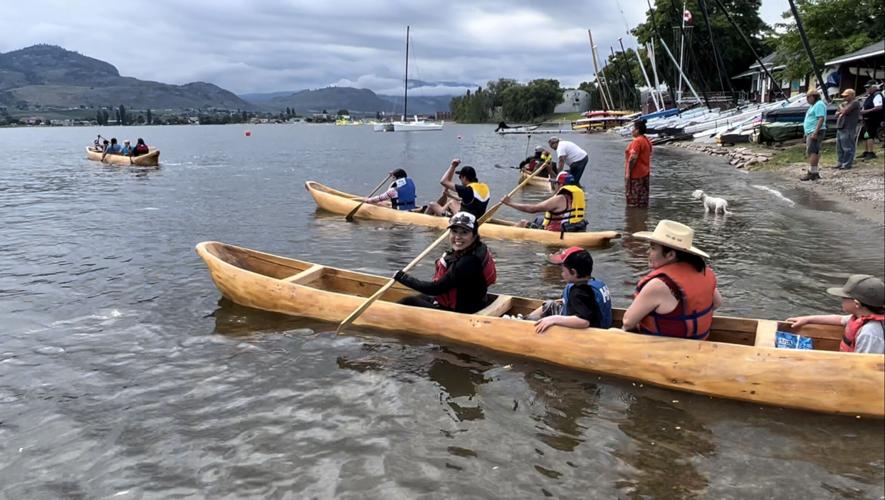 Paddlers start their journey across the lake to Oroville on Monday (July 4) morning. 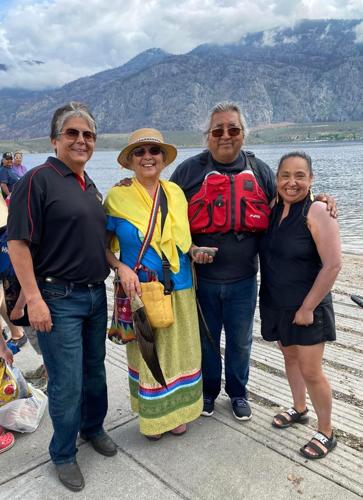 Paddlers start their journey across the lake to Oroville on Monday (July 4) morning.

OSOYOOS LAKE – Herman and Joanne Edward, from the Lower Similkameen Indian Band of the Okanagan Nation, led a group of paddlers on July 4 from the USA and Canada across the 49th parallel, the agreed upon border established on August 5, 1846, between the USA and Great Britain. The Jay Treaty signed in 1794 between the USA and Great Britain established the freedom of American Indians to freely cross the international boundary for the purpose of employment, study, retirement, investing, and/or immigration. Both the USA and Canada have not made it as easy as it would seem to exercise Jay Treaty rights.

Many band members from Canada are harassed by Canadian Border Services when returning from their territory south of the 49th parallel. Sometimes, they are made to wait hours before being allowed to continue into Canada. ‘We didn’t cross the border, the border crossed us,’ is an argument against the harassment by First Nations. Another argument is that ‘we weren’t born in Canada, Canada was born from us.’ Both statements, while heard, do not sway the labor imposed upon them to travel in their own territory.

While crossing the border with my own mother in the summer of 2000 to make a withdrawal from a bank where she had money, the border agent asked us, “I don’t understand, you’re coming up here to rob the bank,” trying to goad us into an argument and give him a reason to deny us entry. Another time, a cheerful border agent was happily going about her duties with the vehicles ahead of us, then when she turned her attention to a vehicle full of Natives, her face turned sour in the August sun in 2011. We all had identification to cross, we were heading to Ironman Canada, the same as many of those in line ahead of us and behind us. Every single one of us had the right to enter but was made to go inside for further scrutiny. Canada has an international reputation for being friendly, but many families and elders have similar stories when returning across the 49th parallel.

So, each July 4th, there is a canoe paddle that takes part of the day to paddle from Osoyoos to Oroville as a display of resistance. Many of the paddlers’ families have been here since Time Immemorial, and want to freely exercise the same rights their ancestors enjoyed. A concerted effort is made for each paddler to have a Status Card for Canadian First Nations or a Tribal ID for those from the US side of the 49th parallel. While a US or Canadian Passport would be ideal for the US and Canadian governments for crossing, it would defeat the purpose of the canoe crossing.

Herman Edward told those gathered before setting off, “We don’t have a border, we never had. Our elders didn’t have the education to fight and now our people are educated so much they forgot they are nqwilxcn. You have to be able to tell the suyapi, “This is my home, this is my land.” When asked at the border where he is from, Herman will tell them, “You're standing on it.”

Tribal members from Kalispel, Spokane, and Colville Tribes canoed from Oroville to meet them in the middle of the lake. A fantastic thunderstorm swept across the valley and lake. A normally dry, hot July was replaced with a rainy, chilly day to canoe. Food was waiting for all those who crossed the 49th parallel, organized by Arnie Marchand. It continued to storm and hail while everyone huddled under the gazebos and canopies to try to stay dry.

The right to cross the border goes beyond the 49th parallel, or the Jay Treaty. Herman tells everyone, “Creator gave us this land to take care of. We are the voice of the water and everything you see in this land.” It affects us culturally when the land isn’t working the way when Syilx and other First Nations were the primary stewards. The land has changed so much over the years. One case in point is that “We are looking for our roots. We are forgetting how to pray for our foods and ourselves. Today, keep your minds strong. Every pull is a prayer–praying for your relatives in the south. We need to make sure when they come north, their path will be clear all the time.”

We're always interested in hearing about news in our community. Let us know what's going on!